There have been mixed reviews about the 74th Primetime Emmy Awards, which went down Monday night. Some liked Keenan Thompson as host; some found his emceeing weird. People took issue with some of the presenters, and others didn’t care. It was definitely a mixed bag of a show, which had its shining moments and others that fell a little flat, and some that were almost objectionable.

Now no awards show pleases everyone. It’s just not possible. I thought that this year’s Emmys had enough pluses to make me feel good about looking forward to it, as I always do. Here’s a look at the biggest hits and misses at the 2022 Emmys, in my opinion.

Kenan Thompson was not bad, I thought. Yes, I’ll admit that my expectations were really low after last year’s emcee Cedric the Entertainer was such a bore. But Thompson held his own in the limited time that he was up there doing his thing. The Netflix digs were funny, because we know how things have been for the streaming giant lately. The humor, in general, wasn’t off the charts, but it was funny enough. That opening number was weird, for sure, but it was eccentric enough to like parts of it. And it recalled certain iconic TV themes, such as FRIENDS and GAME OF THRONES, which set the tone for a celebration of television. And for a television fan, that was nice. Could the execution have been better—absolutely! The music segues also left a lot to be desired. 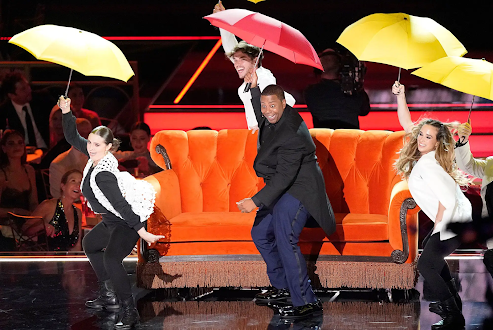 MISS: THE TRIBUTES TO TELEVISION

If the execution of the opening wasn’t quite up to the mark, the tributes to genres were even less than that. The idea was great—especially to celebrate TV staples, such as medical and crime procedurals that don’t make it to awards in general. However, it didn’t come together like it should have. The montages should have evoked a lot more in fans of TV who consume as much of the case-of-the-week stuff as they do all the high-profile, high-concept cable/streaming fare. It also felt a little out of place in parts. A little more thought should have gone into going from drama to comedy to medical drama to crime procedural, and where it was all placed.

As much as the tributes didn’t quite make it, it was nice to see a few genre faces that haven’t been seen at the Emmys since procedurals have lost steam at the awards. Chandra Wilson, Mariska Hargitay, Christopher Meloni, and even Freddie Highmore—they were all lovely to see. Speaking of Chandra Wilson, I think Shonda Rhimes and Sarah Paulson were perfect as presenters for the Geena Davis Institute on Gender in Media, also considering that Davis has starred in Rhimes’ GREY’S ANATOMY. Other presenters were also quite good to see. The three leads of ONLY MURDERS IN THE BUILDING were funny and endearing and had the chemistry that we love them for. It was nice to see Sofia Vergara up there, and Selma Blair, who got cheered on, having recently overcome certain MS-related health issues. Okay, a Pete Davidson was an ill-fit for announcing outstanding comedy, but he was funny. They should have just had him present something else. And I wish Lee Jung-jae and Jung Ho-yeon, of SQUID GAME had been given more to present. 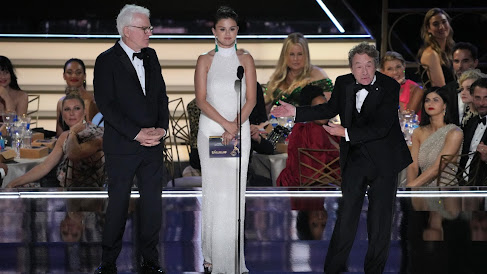 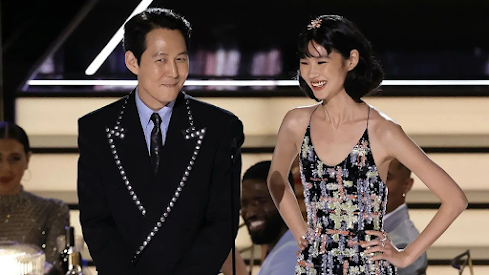 MISS: THE LIMITED TIME FOR ACCEPTANCE

Some of the presentations did fall flat, and used up more time than the show could afford. The little sketches with Homer Simpson and Kumail Nanjiani were really not that funny and could have been omitted, making more time for the acceptance speeches. More than a few recipients were taken by surprise with how the countdown for their acceptance started almost immediately and left them flustered and fumbling. It wasn’t fair to them. Sure, it was all probably in order to keep the show at three hours, but there were other ways to trim the time—ways that had to be adopted at the planning stage. 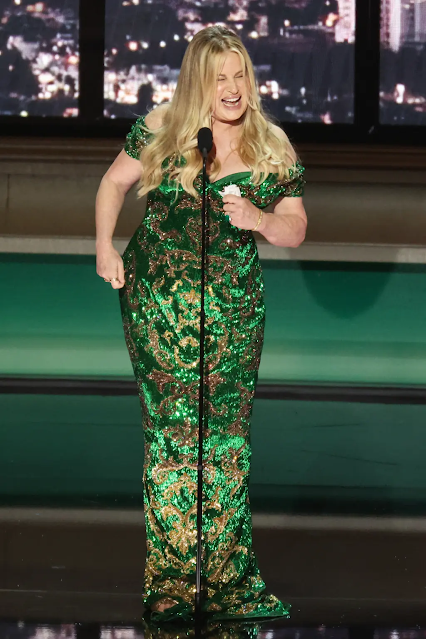 Despite the limited time, some acceptance speeches and bits were excellent. Two particularly come to mind. Jennifer Coolidge was one of the winners who couldn’t handle the limited acceptance time, and pleaded them to let her stay on. The music got louder and changed, and things could have gotten awkward, as they have in the past. However, Coolidge did not let that happen. With her amazing stage presence and sense of humor, she did a little jig to play along with the music and it was a hoot! I laughed out loud, and I’m still laughing thinking about it. Sheryl Lee Ralph, on the other hand stole the show with her singing as she accepted the Emmy for comedy supporting actress for ABBOTT ELEMENTARY. And then she went on to give a powerful speech about believing in yourself and your dream. It was the best acceptance of the night. 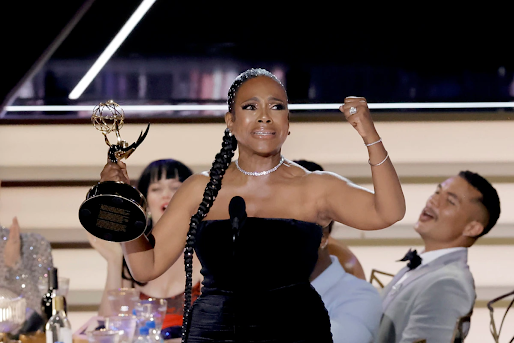 MISS: THE PRESENTATION FORMAT AND SEQUENCE

Time limits and all aside, the formats of the presentations themselves felt a little clumsily done. The sequence was a little too random, even if it would have been boring to go through comedy, limited, variety/sketch/talk/game, drama all one at a time. There should just have been some more sense to how one category went into another. And then, to make things worse, on some occasions, the nominees were announced before the presenters came to the stage and did their little bits. It should always be presenting bits first, then nominees and immediately after, the opening of the envelope.

It should have been more like the presentation of writing for a limited series, by Mindy Kaling and B.J. Novak. They made harsh digs about how limited series makers had a lot less to do than network series runners do. It was somewhat true, okay, but a little harsh to bring up right when you're presenting an award for limited series. Yet, it followed the sequence of how a presentation should be.

Another jarring thing was the ‘in memoriam’ section, which didn’t focus on the names on the screen for those viewing from home. We didn’t need to see the performer, John Legend, if it came at the cost of seeing the names of people who passed away in the last year. The live directing should have been done such that we saw those visuals being presented. Also, it seems they even forgot a few names of recently deceased individuals, such as Olivia Newton-John.

Despite the event’s flow being all over the place, and a number of directing issues, the results of the awards themselves were very satisfying for the most part. The wins were not as predictable as one might have thought they might be. Sure, DOPESICK deserved more than THE WHITE LOTUS did, but we were prepared for what happened. What I wasn’t expecting was ABBOTT ELEMENTARY not winning comedy, but was happy to see the better show—TED LASSO—winning instead. I was unhappy that the fantastic SEVERANCE and the captivating YELLOWJACKETS and the lovely ONLY MURDERS didn’t win anything. However, SQUID GAME and Lee Jung-jae made Emmys history, and there were some pleasant surprises as well, such as Sheryl Lee Ralph and Matthew Macfadyen—who was excellent in SUCCESSION season three. SUCCESSION had to win drama, and it deserved to. I wish showrunner Jesse Armstrong hadn’t made that joke about England’s new King Charles (about how the show’s win had more to do with voting than Charles’s succession after Queen Elizabeth’s death), but Brian Cox set him straight by telling him to keep it ‘royal-less’. 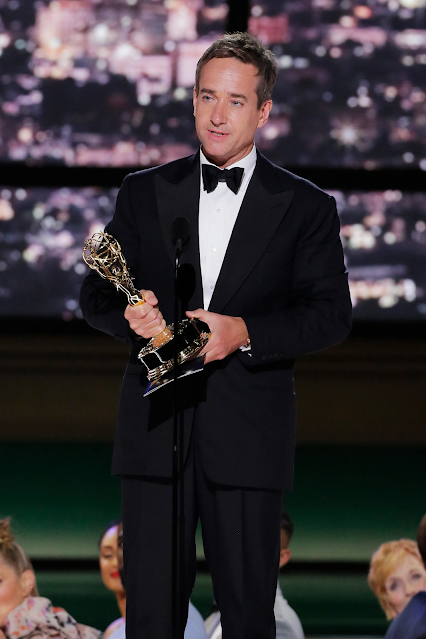 And that’s how it all came to an end. It wasn’t a perfect show, but it was nice enough.

Here’s a list of all the winners across drama, comedy and limited series: 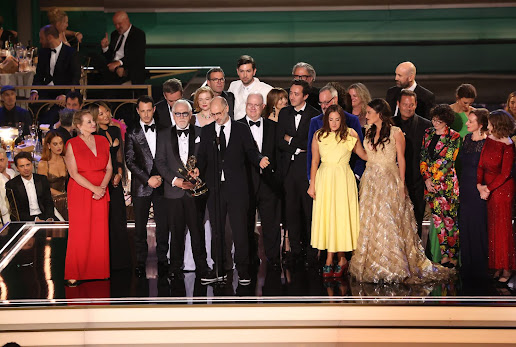 SEVERANCE: ‘The We We Are’ – Ben Stiller

SUCCESSION: ‘Too Much Birthday’ – Lorene Scafaria

SEVERANCE: ‘The We We Are’ – Dan Erickson 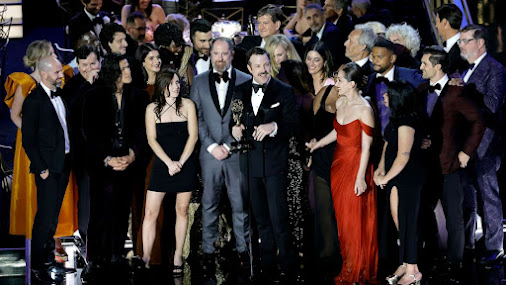 WHAT WE DO IN THE SHADOWS

HACKS: ‘There Will Be Blood’ – Lucia Aniello

ONLY MURDERS IN THE BUILDING: ‘The Boy from 6B’ – Cherien Dabis

ONLY MURDERS IN THE BUILDING: ‘True Crime’ – Jamie Babbit

TED LASSO: ‘No Weddings and a Funeral’ – MJ Delaney

HACKS: ‘The One, the Only’ – Lucia Aniello, Paul W. Downs, and Jen Statsky

ONLY MURDERS IN THE BUILDING: ‘True Crime’ – Steve Martin and John Hoffman

TED LASSO: ‘No Weddings and a Funeral’ – Jane Becker

WHAT WE DO IN THE SHADOWS: ‘The Casino’ – Sarah Naftalis

WHAT WE DO IN THE SHADOWS: ‘The Wellness Center’ – Stefani Robinson 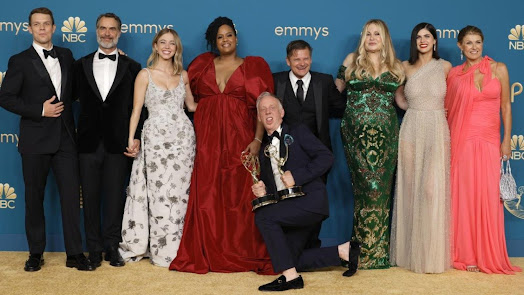 Oscar Isaac, SCENES FROM A MARRIAGE

THE DROPOUT: ‘I'm in a Hurry’ – Elizabeth Meriwether