PREDICTIONS FOR THE EMMY AWARDS 2022: WHO WILL AND WHO SHOULD WIN

SUCCESSION, ABBOTT ELEMENTARY, THE WHITE LOTUS—which of these actually deserves the big Emmy win that we're going to witness on Monday? Here’s what I believe, and I’m keen to know what you think too. Have a look at all the predictions for the Emmys 2022—the big seven categories, each for drama, comedy and limited/anthology series 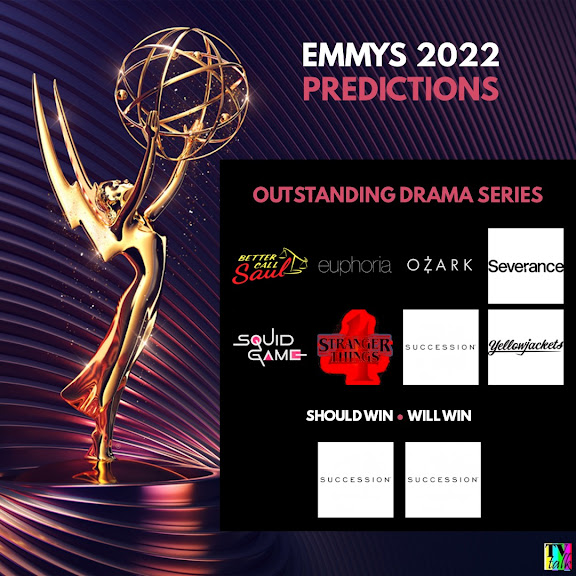 SUCCESSION – Should win; will win

There’s no doubt about SUCCESSION being leagues ahead of all the other shows in this category. I would say SEVERANCE would come closest to it than the others could. SQUID GAME’s popularity could just work in its favor here to push it over the edge. However, one must remember that SUCCESSION has also enjoyed immense popularity, in addition to critical acclaim as well as great success at the Emmys in the past.

There seems to be an equal amount of buzz surrounding Melanie Lynskey and Zendaya. I think Zendaya deserves this. This is not just because her performance through Rue’s withdrawal in EUPHORIA was so raw and real. Lynskey, who I believe was very good, just didn’t have as much material to shine with, and not brighter than Zendaya. This may be an unpopular opinion, but I thought the role itself was too silent and subdued, and doesn’t warrant as much of the acclaim it’s getting, even considering the restraint the delivery must have required. Yet I think Lynskey will win, because her show is new and buzzy, and the Academy has not repeated a win in this category since 2013. Zendaya’s won already for EUPHORIA. So I think the Academy will go with the buzz, buzz, buzz.

There was overwhelming support for Brian Cox this time. Many considered it has his turn to win for SUCCESSION after Jeremy Strong won in 2020. However, Lee Jung-jae won at the SAG Awards in the winter and the conversation around him has definitely gained momentum. After SQUID GAME’s performance at last weekend’s Creative Arts Emmys (four wins, including a drama guest actress win for SQUID’s Lee Yoo-mi), it seems like the Korean breakout will win a couple of above-the-line Emmys as well. So I wouldn’t be surprised if Lee Jung-jae wins one of them.

Julia Garner could very well win her third (and final) Emmy for OZARK. However, I’m going to go out on a limb here and predict Rhea Seehorn. She was, without a doubt, the MVP of BETTER CALL SAUL, throughout its run, and was ignored by the TV Academy until now. I think that the nomination this year means that the voters are leaning strongly towards a course-correction with Seehorn, which can go all the way to voting for her in the final ballot. I could be wrong, but after seeing her performance in the series’ last few episodes, which coincided with the Emmys' voting phase, leads me to believe that this is her turn. Even though Seehorn’s nomination is not for the last few episodes, the series enders could still have served as a reminder to the voters about how good she was through the series. And I don’t think the momentum will last till next year, which is when said episodes fwill be eligible. I think her time to win for SAUL is now or never.

Kieran Culkin was an early favorite here, and he could still win, but I think this is one is going to be Matthew Macfadyen’s. The episode in SUCCESSION season three, where his Tom meets Kendall in the diner had me in awe of his nuanced, moving, yet restrained performance. And I remember thinking back then that this could win him an Emmy. Now, on following the buzz around Macfadyen, I am even more convinced.

SEVERANCE: ‘The We We Are’ – Ben Stiller – Should win

SUCCESSION: ‘Too Much Birthday’ – Lorene Scafaria

I think SEVERANCE’s season finale was a masterclass in directing and editing, and directing at the editing stage. It was fast-paced, tight, and brilliantly captivating, with excellence drawn from all elements—from acting to cinematography. It should win. However, SQUID GAME’s popularity will win it this one, for an episode that took everyone by surprise and set the tone for the shock and awe of the series. It’s a good episode in directing.

SEVERANCE: ‘The We We Are’ – Dan Erickson

SUCCESSION: ‘All the Bells Say’ – Jesse Armstrong – Should win; will win

SUCCESSION will win here. As the phenomenal favorite that it is, and with its leading 25 nominations as an indication, it has to win at least writing or directing, if not both. My bet is on writing. 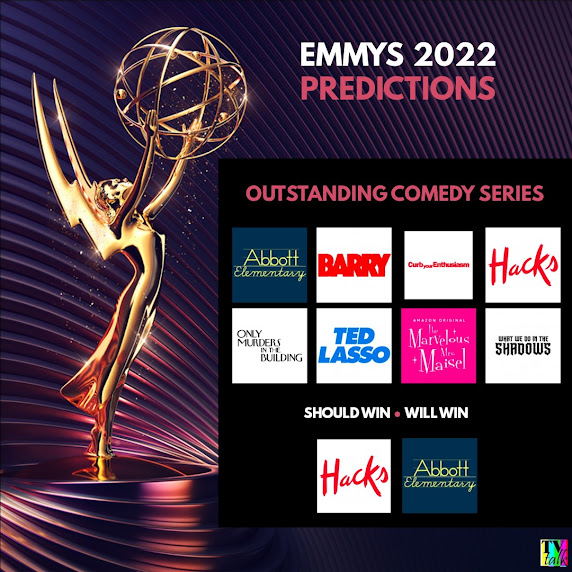 WHAT WE DO IN THE SHADOWS

ABBOTT ELEMENTARY is a nice show, very endearing even, and quite funny in some moments. However, it’s nowhere close to being this great new comedy that it’s being made out to be. However, the momentum it has gained is overwhelming. And its win for casting at last weekend’s Creative Arts Emmys is troubling, since the Emmy for comedy series and casting has not been won by different shows since 2014. TED LASSO, HACKS, ONLY MURDERS and even MAISEL (which is past its prime) are all more worthy of the win than ABBOTT. If I had to pick, think HACKS’ excellent second season should be winning this (in case anyone wanted to know).

Jean Smart should definitely win again here. She was fantastic in season two of Hacks. And I’m afraid I think Quinta Brunson’s (acting) performance in ABBOTT is highly overrated. She really does make it very obvious that she’s trying to act natural. It appears like a performance, and I hope the Emmy voters see through that.

Jason Sudeikis has been losing momentum, even though he was a default favorite earlier. Now there’s buzz around not just past winner Bill Hader—with BARRY’s return this year—and even Steve Martin, owing to ONLY MURDERS season two releasing during Emmys voting. It’s a tough one to predict. I’m just going to go with Hader, knowing his past repeated success at the Emmys. I must make an honorable mention of Nicholas Hoult though. He’s so good and charming in THE GREAT.

Hannah Waddingham was particularly good in season two of TED LASSO—not just for the funeral episode, but even for that Christmas episode and through Rebecca’s relationship with Sam. She should win again. However, Janelle James is such a breakout success in ABBOTT ELEMENTARY that I believe her momentum will take her through to the finish line. People really seem to love this show and her particularly.

Henry Winkler is back this year, and could win again for BARRY. However, I think Brett Goldstein is still enjoying more popularity for TED LASSO. I think he’s in for a second consecutive win.

HACKS: ‘There Will Be Blood’ – Lucia Aniello

ONLY MURDERS IN THE BUILDING: ‘The Boy from 6B’ – Cherien Dabis

ONLY MURDERS IN THE BUILDING: ‘True Crime’ – Jamie Babbit

TED LASSO: ‘No Weddings and a Funeral’ – MJ Delaney

BARRY’s not winning outstanding comedy, but it has strengths in directing, over the others here, so it will win Bill Hader an Emmy for directing, even if he doesn’t win another acting Emmy for the show (this year).

HACKS: ‘The One, the Only’ – Lucia Aniello, Paul W. Downs, and Jen Statsky – Should win

ONLY MURDERS IN THE BUILDING: ‘True Crime’ – Steve Martin and John Hoffman

TED LASSO: ‘No Weddings and a Funeral’ – Jane Becker

WHAT WE DO IN THE SHADOWS: ‘The Casino’ – Sarah Naftalis

WHAT WE DO IN THE SHADOWS: ‘The Wellness Center’ – Stefani Robinson

With the tremendous momentum ABBOTT ELEMENTARY has gained, it will at least win the writing Emmy, if not one or two for acting as well as the big comedy prize. This win will go to Quinta Brunson even if she doesn’t win lead actress, and even though HACKS deserves this way more for that absolutely outstanding season finale. 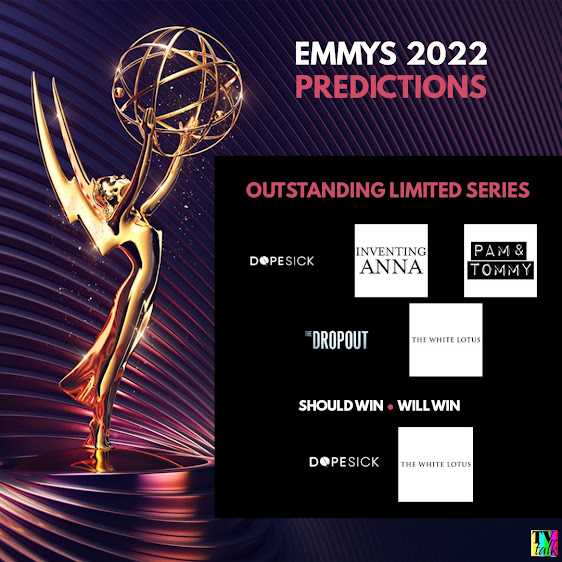 THE WHITE LOTUS – Will win

The fanfare behind THE WHITE LOTUS in incredibly overwhelming. It was hugely popular when it aired, and it did well through the winter awards. And then the show maintained its momentum with the huge number of Emmy nominations, dominating some of the categories in this list. It’s still a favorite to win, so it seems like it will, even though DOPESICK was the actual best show from the list of five above. A close second was THE DROPOUT.

Amanda Seyfried, THE DROPOUT – Should win; will win

I would have loved to see Lily James win this one. She was absolutely terrific as actress Pamela Anderson, in a heartwarming and heartbreaking way. However, I think Amanda Seyfried just edged her out here, with that hauntingly internalized portrayal of Elizabeth Holmes. She’s going to win for this. I’d like to make an honorable mention of Margaret Qualley, who did a fantastic job in MAID. I wish MAID had receieved more recognition.

Oscar Isaac, SCENES FROM A MARRIAGE

This is the surest of the Emmy wins to be announced on Monday. Michael Keaton has been a favorite in limited series acting, through the winter awards as well, and he’s still got a lot of people betting on him. So I don’t see this going any other way. Besides, he was outstanding with his turn in DOPESICK, through the extreme ups and downs that his character went through.

Jennifer Coolidge got a huge ovation when she simply presented an Emmy last year, riding high on the success of THE WHITE LOTUS, and many said then that it meant her fate for an Emmy win this year was sealed. That buzz has not died down, one year later, and Coolidge is still is leading in all possible polls online. Kaitlyn Dever, whose performance in DOPESICK was devastatingly good, should win over Coolidge, whose turn in LOTUS was more novel than worthy of acclaim. However, Coolidge will win.

Murray Bartlett is winning this one, even though I think that it should be Jake Lacy. However, there is some buzz in support of Steve Zahn as well, even if Bartlett is a clear favorite (though not as much as Coolidge is for supporting actress). Yet, if Lacy and Zahn have enough support, there could be an upset with Emmy voters, who in favor of WHITE LOTUS, splitting the vote three ways. In that case, Seth Rogen seems to be next in line for this.

DOPESICK: ‘The People vs. Purdue Pharma’ – Danny Strong – Should win; will win

I could see DOPESICK winning here, which will almost be like a consolation for it not winning outstanding limited series.

THE DROPOUT: ‘I'm in a Hurry’ – Elizabeth Meriwether – Should win

THE WHITE LOTUS is a show stronger for its writing than for its directing. If it wasn’t a clear favorite among the limited series, it might not have won here, but it is, so there.