HITS AND MISSES AT THE EMMYS: FROM ‘THE CROWN’ SWEEPING DRAMA TO THE LESS-THAN-ENTERTAINING HOST

The host of the 73rd Primetime Emmy Awards, Cedric ‘the Entertainer’ was far less entertaining than his screen name claims he is. However, THE CROWN swept the drama categories, while TED LASSO, MARE OF EASTTOWN won big. Here are the major lows and highs from the 2021 Emmys 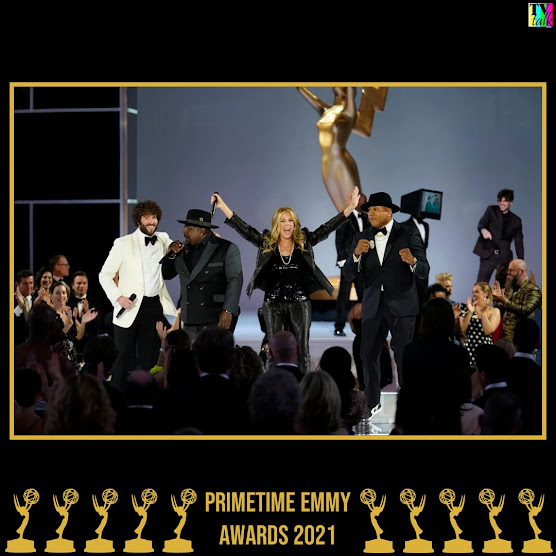 Cedric the Entertainer: What were they thinking!

Now I’m not familiar with Cedric the Entertainer’s work otherwise. I suppose he might be entertaining in general, when he has better material to work with perhaps. However, his turn as the emcee at this year’s Primetime Emmys was probably as dull as it could get. He didn’t command any attention, and his jokes fell flat, as did his sketches, particularly the bit where he was superimposed on a lake, on some old footage. His spoof on the fly on former US vice president, Mike Pence’s head was also a drag. And the bit backstage, where his ‘TV wives’ ganged up on him, was also completely dull. Cedric failed to even engage the audience, except for in the opening number, which was good. It was fun way to start the show, bringing the performance into the audience, especially since this was an in-person show after a while. However, since the audience were such an active part of this, it was really a performance that they could have done on their own, without a host having to kick-start it. If there was ever a year the Emmys could have gone without a host, this was it. We could have done without Cedric’s ‘entertainment’.

Several other presentations fell very flat, with Seth Rogen’s unfunny bit in the beginning about being in a closed room together, setting the tone for rather dull presentations of categories that followed. Even Amy Poehler, who’s otherwise so funny and amazing, was plain boring, as she tried to make something about what awards and categories are land as funny. I actually appreciated some of the presentations that were made without jokes, and instead just connected maybe an anecdote with the category, such as Sir Patrick Stewart’s, when he announced outstanding writing in a limited series, or the Olympians announcing the outstanding competition reality series.

THE QUEEN’S GAMBIT speeches—disrespectful and tone-deaf

The show deserved the awards it won, especially directing, for its captivating and mesmerizing quality among other things. However, the acceptance speeches by the winners left much to be desired. Scott Frank, who won for directing, disrespected the ceremony’s process by essentially being rude to the production team who played the music that they do when a winner needs to respect time and wrap up their speech. Frank’s reaction to the music made him seem entitled. Sure, he was being honored, but so were others, who may have gone over their time, but didn’t act rude about it. You’ve got to respect the ceremonial processes. And you’re not Debbie Allen, winning the honorary Governors Award for her career-wide achievement, earning her the special attention that she received and deserved.

To make it worse, William Horberg, executive producer of THE QUEEN’S GAMBIT, who made the speech when the show won outstanding limited series, made a tone-deaf comment. He said that the show’s lead actress Anya Taylor-Joy brought back sexy to the game of chess, and he also said that the patriarchy had ‘no defense against our queens’. Which part was problematic? I suppose it’s clear enough, as is the contradiction and the hollowness. 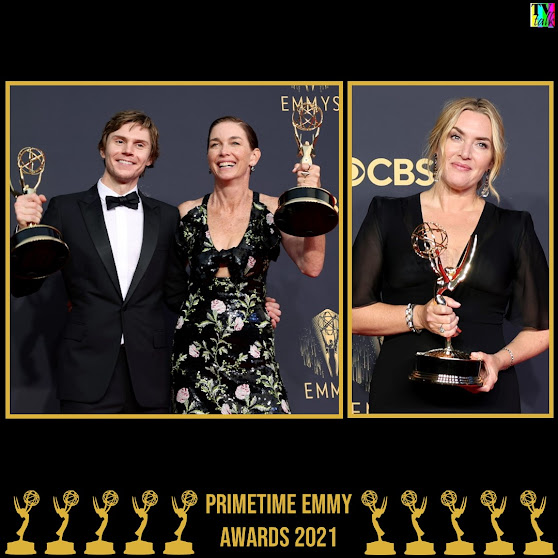 Kate Winslet is such a seasoned awards-winner, who can just nail it at any awards acceptance podium, without ever sounding like she’s ‘been there done that’. The passion for her work and the enthusiasm over winning and appreciation for being recognized always come through. And that was the case this time too, as she won lead actress in a limited series for MARE OF EASTTOWN. She made a comment about women having each other’s backs, while also mentioning her own family, and her coworkers, with love and respect. She touched upon everything meaningful that one can, in those short 45 seconds, and did it with a lot of heart. She was fantastic. Evan Peters was also endearing as he shouted out to Winslet, thanking her for ‘being Kate Winslet’, while also thanking all the people who helped him achieve his Emmy-winning performance. Even Julianne Nicholson, whose win was a pleasant surprise—because she wasn’t a frontrunner, but absolutely deserved it for her gut-wrenching performance—shouted out to Winslet, for leading and supporting the cast and inspiring them. All these performances being rewarded was excellent. The show deserved everything it won and more. It was a performance powerhouse over and above everything, and that was recognized.

TED LASSO’s wins and speeches by Hannah Waddingham and others 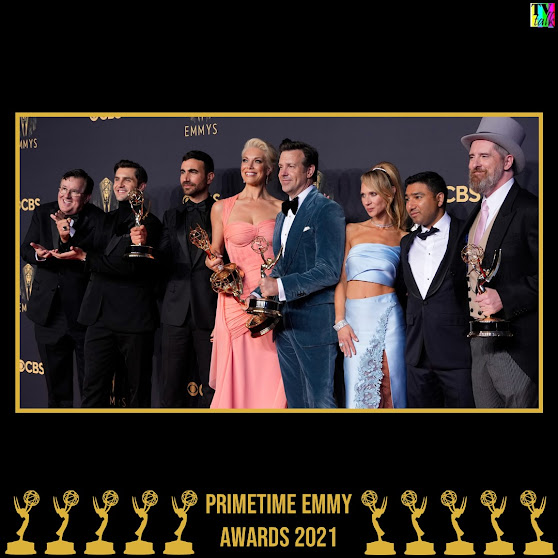 Probably the most heartfelt acceptance speech, coming from a humble place and genuine appreciation for the opportunity and the recognition that came from TED LASSO, Jason Sudeikis and the Emmys, was Hannah Waddingham’s. She won the first Emmy of the night and was exhilarated. It was endearing, charming, honest and real. All the shrieking and expression of her thrill was infectious. I loved it. And then Brett Goldstein also won, and he dropped the ‘F-bomb’ twice, even though he said he wasn’t supposed to. It was a funny nod to his character, Roy Kent, who he seems to be like in real life. It was a short and sweet speech. Jason Sudeikis won lead actor and TED LASSO won the top comedy prize at the end, making it a total of four main Emmys. I thought they would win more (the rest of the comedy categories went to HACKS), however, it was so good to see one of the best ongoing shows these days getting so much love and recognition.

Crowned at last: THE CROWN 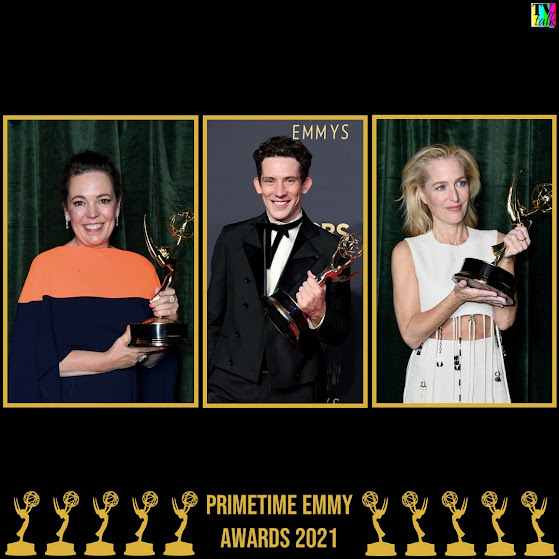 For three seasons, THE CROWN didn’t win outstanding drama series, but I just knew it would one day. Season four had to be the season for it to finally happen. That it would be an overwhelming sweep came as a delightful surprise, all the while knowing that they deserved every win (maybe not so much Tobias Menzies, who, I thought, paled in comparison with his predecessor Matt Smith, who played Prince Philip previously on the show). The show ended up winning all seven main drama awards—including outstanding drama series, lead actor for Josh O’Connor, supporting actress for Gillian Anderson, writing, directing, and lead actress. It was particularly surprising to see Olivia Colman winning for playing the queen, especially since the season’s strengths had so much to do with Lady Diana and the portrayal by Emma Corrin, who was a frontrunner for lead actress drama. However, through Colman’s two seasons as Queen Elizabeth and her not being recognized as much as her costars have, I always thought she was that cast’s unsung leader and the show would have been quite weak without the value she brought to it. So I was thrilled to see her win and getting rewarded for her final turn as the queen in this series. Her speech was short and sweet, and very genuine, like she always is, as he even mentioned how she missed her father, who she lost to COVID. And her little shout-out to Michaela Coel—who had won for writing in a limited series for I MAY DESTROY YOU, and dedicated her award to all survivors of sexual assault—was very cute, and a sweet nod to a meaningful dedication.

Debbie Allen and Jean Smart being honored and with standing ovations

Debbie Allen was honored with the Governors Award for career achievement, as a dancer, teacher, choreographer, producer, director, actress, etc. She made a huge mark with her presence alone. She made a strong speech and urged people to claim what they deserve and raise their voices and tell their stories. Allen is quite phenomenal and impressive, and it was amazing to see her in the spotlight, commanding everyone’s attention and respect, while being so inspiring. It was particularly nice to see Ellen Pompeo and on-screen son Jesse Williams, from her GREY’S ANATOMY family, showing up for her. 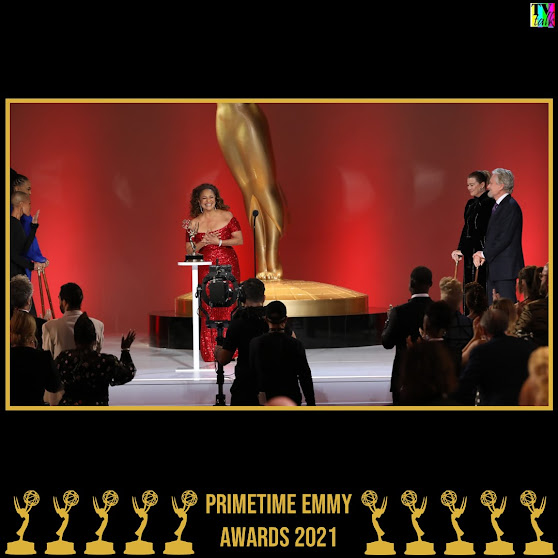 I was also impressed with Jean Smart’s presence, as she accepted her comedy lead actress Emmy for HACKS. Like Debbie Allen, she got a standing ovation, and commanded respect, while being so humble and graceful. I particularly feel for women of a certain age being recognized and respected, in an industry that is generally partial to men, particularly in a certain age group. And Jean Smart is so talented. Seeing her being awarded was amazing.

The ‘no-Emmy support group’ and other good presentations 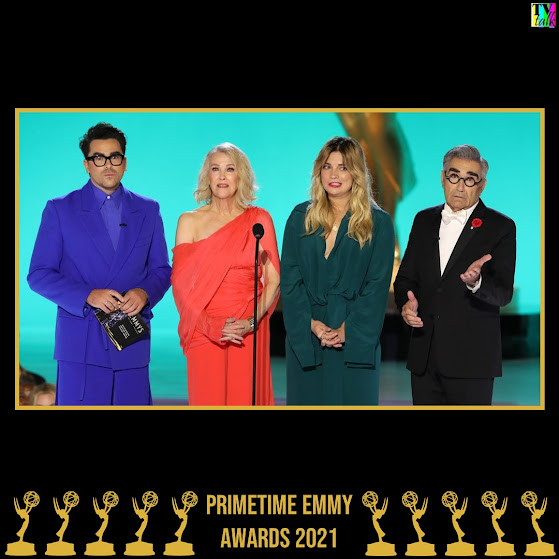 A few presentations were actually funny, and kind of made up for the show that was largely quite lackluster otherwise. The sketch about the ‘no-Emmy support group’ was hilarious. It was so sporting of Alyson Hannigan, Scott Bakula, Jason Alexander and Zooey Deschanel—who have never won—to do this bit about how they feel about never having won, especially after being in the industry for decades. The funniest was Fred Savage popping up and complaining about how he had still not won, even though he already had two nominations by the age of 14. And winding it up, was Dr. Phil, who walked in and advised them to get booked on THE CROWN or TED LASSO if they wanted to win. It was the perfect punchline. Jennifer Coolidge was also funny, as she spoke ironically of actors overcoming the handicap of being men in this industry. Her delivery was excellent in her signature style! Even the bit by BLACK-ISH’s Anthony Anderson and Tracee Ellis Ross, who spoke about how ‘syndication’ was better than marriage was funny. And then there was the SCHITT’S CREEK family of Roses—Eugene Levy, Catherine O’Hara, Annie Murphy and Dan Levy—presenting writing and directing for a comedy series. Some didn’t like it, but I thought it was cute—the whole bit about how Eugene pissed off writers by telling them to ‘lift their dialogue’ and how he was punished for it on stage, with a blank teleprompter. It was sweet, especially because it went with his Johnny Rose image, and the rest of the ‘Roses’ followed their cues to be a little like their characters from the beloved show.  It was a nice little throwback to last year’s sweep of the comedy categories by SCHITT’S CREEK.

And this year, it was THE CROWN that swept drama. Finally, here are all THE CROWN’s wins and the rest of the main scripted series results from the 73rd Primetime Emmy Awards last night:

MJ Delaney, TED LASSO (‘The hope that kills you’)