Nominated for outstanding drama series at the Primetime Emmy Awards 2021, THE BOYS has grown from being a comic book-inspired popcorn entertainer to becoming a storytelling powerhouse that has used its own universe to its amazing advantage

Earlier this month, Vought International posted a bulletin from Vought News Network (VNN) on their official YouTube channel, giving us an update following the events of the second season of THE BOYS, which ended in October 2020. Intended as an on-going companion web-series, there will be more of this VNN ‘coverage’ of ‘The Seven’ that will ‘bridge the gap’ between season two and the upcoming season three. There will reportedly be new episodes of these mock bulletins released on the 7th of every month, until the third season premieres. When? We don’t know yet. They haven’t made a premiere announcement so far. One thing is for certain though. This web-series is a fantastic way to build on the very fascinating universe that this Amazon original series has created. It’s a universe that I almost didn’t get acquainted with.

When THE BOYS first premiered in July 2019, the idea of a story set in a world where the superheroes were the villains seemed a little too strange for my liking. I do enjoy superhero movies and shows. I’m a fan of the Marvel Cinematic Universe, I enjoy The CW’s DC fare, and I’ve even liked some of the Zack Snyder DC films. So a show about superheroes with superhuman abilities was not the problem; but the idea of them as villains sounded to me like a twist that might have been all too gimmicky. Moreover, the promotional artwork and trailers reflected a very campy treatment, which I’m not always a fan of. It needs to be done right for it to work. For instance, GOTHAM, the Batman prequel series that ran on Fox for five seasons, embraced campiness, but elevated it in a very gratuitous manner. It was shock-and-awe for the sake of shock-and-awe. Sometimes, it was entertaining, I’ll admit, but most of the times, it didn’t work. So I had this preconceived notion of what THE BOYS would be like. No, I didn’t specifically think that it would be like GOTHAM, but it definitely didn’t seem like my cup of tea. Yet, I kept it in my Prime Video watch-list, as something that I might visit later.

This month, when the 2021 Primetime Emmy nominations were announced, I was surprised to see THE BOYS in outstanding drama, and I was intrigued. I mean, I hadn’t let my preconceived notions completely judge it and disregard it, but I also hadn’t imagined that it would be in consideration for any ‘best drama’ award. So when I saw it nominated for the Emmys’ top drama prize, I wanted to consider it again. Although, seeing BRIDGERTON in the mix did give me pause, as it made me wonder if the Television Academy had completely lost it this year. However, I decided to give THE BOYS a shot with an open mind, putting aside my preconceived notions. If nothing else, I would have another entertaining superhero show to enjoy.

And a superhero show it definitely was. It didn’t take long for me to sink into THE BOYS, as I got acquainted with Vought and ‘The Seven’. It became clear to me that the premise was far from being a gimmicky twist on the superhero genre. It was definitely far more complex than that. The idea of superheroes being true heroes in the eyes of the public—while actually being unscrupulous elements, in it only for the profit and fame, with practically no ethics, and no sense of altruism—it was genius. It also became quite clear early on that this would be a David-and-Goliath story, with the almost powerless ‘Boys’ going up against literal superheroes and a corrupt conglomerate backing them. So I was drawn into that universe very quickly, and into this interpretation of ‘superheroes’.

It’s something one might have always wondered about superheroes in the genre as we know it. How is it that superheroes from Marvel or DC seldom use their powers for completely selfish reasons? I’m not saying it’s never happened. I’m just saying that it’s mostly always about superheroes who are good. They may be damaged, complex people, who have most often been through some tragedy or trauma that defines them. They may have gray areas, but at the end of the day, they all want to be good and to do good. Yes, there have been supervillains across films and TV shows, who may have also maintained a good public image in their worlds, but I don’t think we’ve ever seen any mainstream hero with powers doing things that they would not want the public to know about; much less, would not even feel guilty about. So it was almost refreshing to see conventional ‘superheroes’ as not just gray, but plain dark, while also being fairly complex.

Moreover, the portrayal of these superheroes and the conglomerate that backs them draws so much from the superhero genre, and the pop-cultural phenomenon that it is. It gives THE BOYS an added layer of complexity—becoming almost a parody. Now how much is taken directly from The Boys comics and its treatment I do not know, as I have not read the comics. But I’d find it hard to believe that the universe created in the series isn’t significantly inspired by real-life pop-culture. Of course, the superheroes are very obviously inspired by Marvel and DC characters. For instance, Homelander has Superman’s powers with Captain America’s public persona. Queen Maeve has Wonder Woman written all over her. The Deep is most definitely a version of Aquaman. A-Train is clearly like the Flash—the fastest man alive. So one could call these characters themselves parodies of those that inform them. However, in addition to than that, it’s the whole re-creation of the pop culture of our real world—movies, TV shows, theme parks, arcades, restaurants, merchandise, and all sorts of profitable enterprises that the show portrays, as a reflection of the real-life phenomena. Not only are the heroes like those that we see in big superhero films of our times; the world portrayed itself is like the world we live in. It spoofs how we are enamoured by Marvel and DC, and probably even suggests how society would behave if superheroes were actually real. It’s almost disturbing as an exaggeration of pop culture’s impact on the real world. On the other hand, it’s also a commentary on capitalism, without necessarily implying that real-life big studios are evil capitalistic entities like Vought. Though if one had to get into political arguments on the matter, there could be a whole lot of interesting views on the real-life studios as well. This series undoubtedly classifies as a satire. 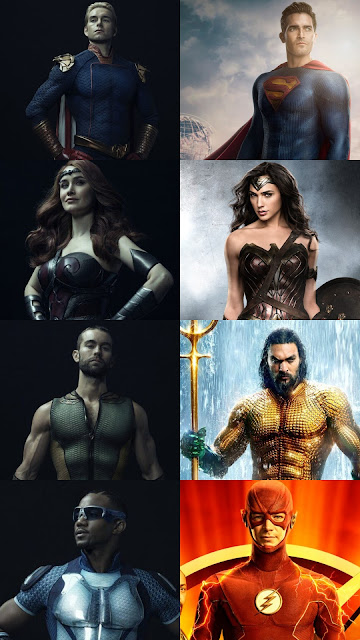 Season two in particular definitely holds up a mirror to society and the socio-political environment of our world today. The most prominent theme, of course, is race and white supremacy. Now the Nazism angle itself has been taken from the source material, but from what I’ve read about it, it’s not as big a part of the story in the comics as it is in season two of the series. The series seems to use the theme in a bigger way, making it a core motivation of the antagonist/s in this story. Naturally, the Nazi angle is heavily informed by the conversation on race issues in the real world, especially vis-à-vis the former US government under Trump, and maybe even last year’s surge of the ‘Black Lives Matter’ movement (the season was most likely in post-production last summer, so maybe not). However, the portrayal of far-right white supremacist voices in the media, the public reactions, the PR surrounding scandals and controversies, the editorializing and strategic use of memes and gifs to twist facts and narratives—it all seems to draw so much from the real world, in subtle and not-so-subtle ways. In fact, they even talk about the ‘supervillain’ threat, and how ‘compound V’ was going to be released for public purchase and dosage, giving every individual the right to equip themselves with the ability to fight the threat against America and world. Surely this was a sly reference to the real-world global threat that the ongoing COVID-19 pandemic has posed and how everyone needs the (vaccine) ‘dose’ to tackle the threat. It could be suggesting all sorts of things, maybe even referencing conspiracy theories that have done the rounds—one can’t know for sure, but one can certainly theorize further. 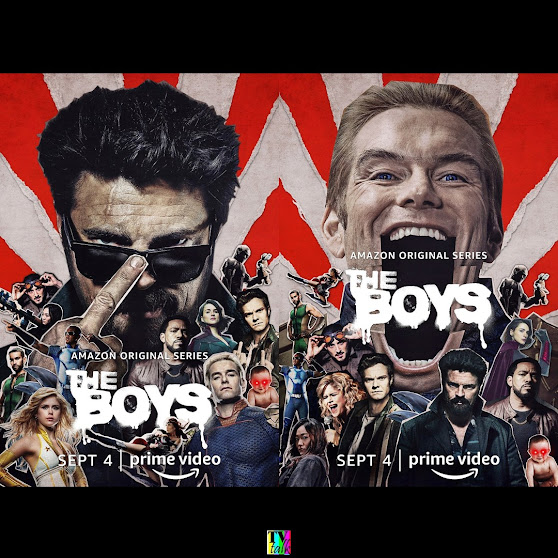 All these layers in the storytelling reflect complexity in theme and structure, with tremendous nuances in treatment, despite a lack of restraint. All this, in the guise of an edge-of-the-seat entertainer—that even has a good share of campiness and established tropes—is rather commendable. The show manages to garner popular appeal, and excites viewers with its exaggeration and how it unapologetically goes all out with R-rated visuals, language, the gore, and especially the extremities in what the characters will do. THE BOYS owns this heightened treatment and uses it to its advantage as a high-concept series. However, it’s not just drama or action. The series actually creates a genre of its own, with satire and dark humor of course, but even other crowd-pleasing bits of romance and such. (Hughie and Annie of course are in focus as a central couple, but Frenchie and Kimiko are my favorite!) All the while, most of these characters are complex and nuanced, despite being quite black or white, and give you a lot to root for and to root against. And I’m definitely looking forward to seeing more of them—not just when season three comes, but even when as the ‘VNN bulletin’ web-series continues. And that’s just one more layer to the complex universe that THE BOYS has created. An obvious nod to the right-wing Fox News—while taking inspiration for its name from the far more liberal CNN—this VNN web-series is definitely expanding this universe, getting us viewers more absorbed into this new pop-cultural phenomenon. The next bulletin should be out August 7, and I can’t wait! 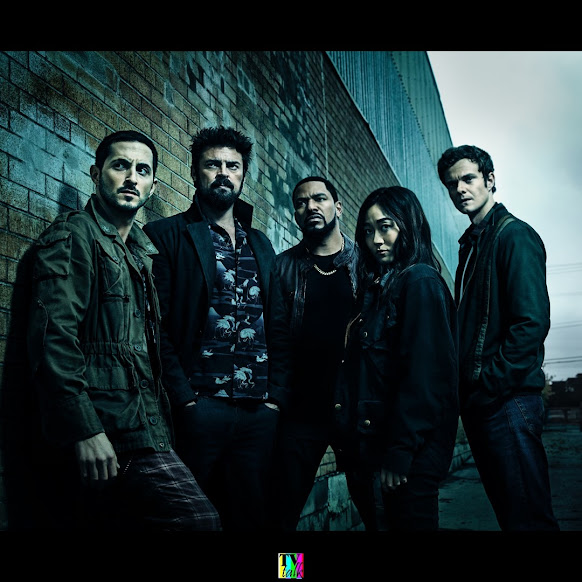