THE ‘FRIENDS REUNION’ REALLY TUGGED AT ALL THE HEARTSTRINGS, AS A PERFECT, LITTLE TRIP DOWN MEMORY LANE

Since the much-hyped Friends Reunion released yesterday, there have been reviews that call it ‘empty’ because of how it didn’t address a lot of conversations that have taken place about the show since it ended. Others have said it’s a ‘TV’ event meant only for hardcore fans, and not viewers of the series who don’t care as much about it as said fans. However, was the special event meant to place a microscope on how well the series has aged since the original run ended 17 years ago? No. Is an event like this expected to appeal to passive viewers of the show? Most certainly not. It was always about talking to those who were interested enough to listen. And it would surely be meant primarily for those who are familiar enough with the show to know the context needed for the conversations and the nostalgia. 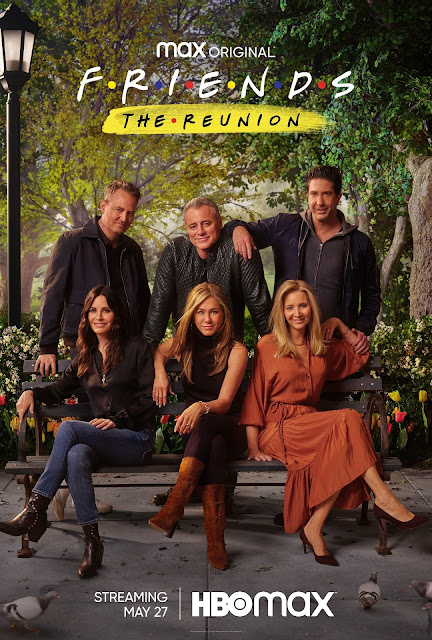 Moreover, the reunion was always meant to be a coming-together of the main cast to take a trip down memory lane, and not to pick up where the show left off 17 years ago. It was never meant to be a revival. I too was aware of that, and my expectations were in check, believing that it would be a nice throwback, and nothing else. Yet, upon seeing the full-length promo that HBO Max had released, I realized that there was a lot more in store than a group interview that one might simply expect to see on any talk show. So my expectations rose, and still the one-of-a-kind event exceeded the expectations. I wouldn’t say it ‘took me back’ per se, as revisiting FRIENDS has been a constant since the show ended, through reruns and streaming and so on. So here are just a few of the highlights of the HBO Max event that made it special—seven highlights to be precise…seven, seven, seven. 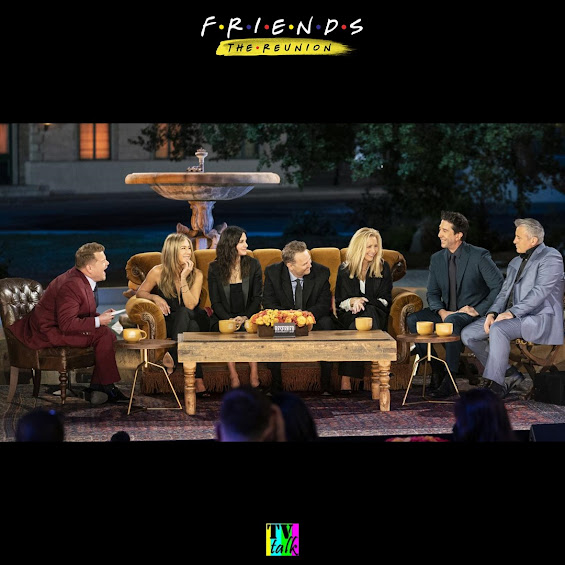 We’ve seen some of the actors together before on Jimmy Kimmel’s show, and with Ellen, after the show ended. So a simple interview would just not do for such a big ‘reunion’. Taking us back to those sets, as the cast reminisced, was just what was required. Moreover, the reenactment of the iconic quiz that made Monica and Rachel lose their apartment to Chandler and Joey was a wonderful way to spark those memories and even a fun way to see how the actors themselves would fare in a quiz about what they’d brought to life. Then, there was the table-reading of scenes, which was fascinating, mainly because the actors’ delivery was so close to what it was in the takes that made it to the episodes, as was evident from the clips from the scenes interspersed. The documentary-style soundbites thrown in added another layer. And then the tributes to the costumes, to ‘Smelly Cat’, to the famous guest actors, and so on against the backdrop of a late-night-talk-show setup just added to the richness of the experience. The variety package, including content akin to ‘DVD extras’, was something that I can’t really imagine being done for anything else really. It was just right for the version of itself that event this was. 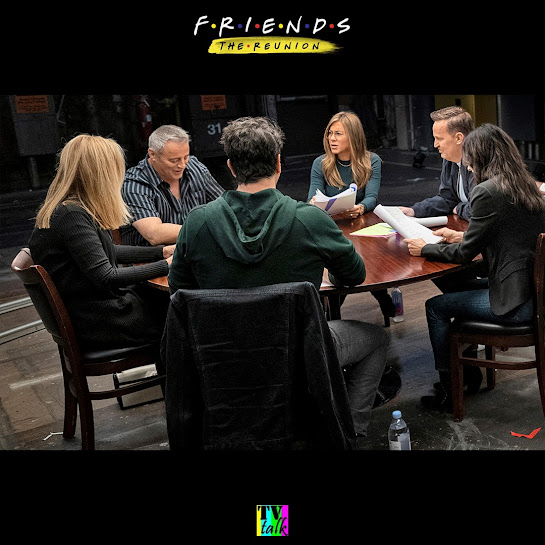 2. The people behind the phenomenon

It was so good to see the creators of the show—Kevin S. Bright, Marta Kauffman and David Crane—being focused on, as they told us about their journeys towards getting the show on the air. From concept and casting to storytelling and conclusion, it wasn’t all brand new information, but it was absolutely essential to include their take on the magical phenomenon that they created, and not just bring us the faces that brought the show to life. The creators’ introduction as the three names on the closing production-house slate was nicely done as well. 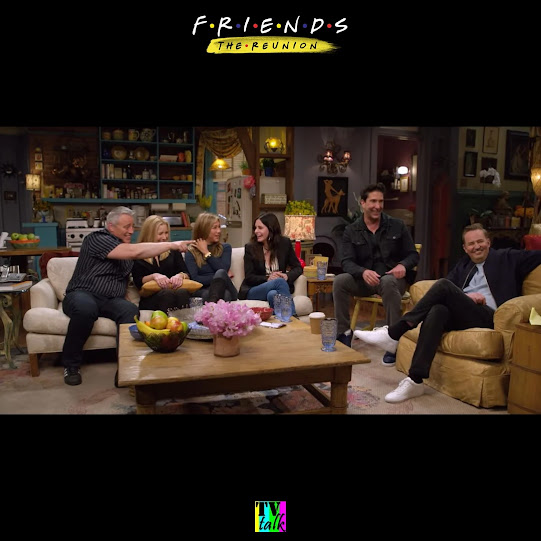 Through the conversations and the documentary-esque interviews, there were a lot stories told that we might have already known. Over years of reading trivia lists on IMDb, BuzzFeed and the like, we already knew that Matt LeBlanc was near-broke when he auditioned, and had a scab on his face during the final call-back. We knew that David Schwimmer was the first actor cast, and that Courteney Cox was originally asked to play Rachel. However, to hear these stories reiterated with such fondness, while also giving us perspectives one might not have thought of before was very interesting. Additionally, the on-set habits such as Cox writing her lines on Monica’s kitchen table, and how the girls always ate lunch together, and how they six of them huddled before every episode—it was just so much fun to discover and/or revisit.

4. Beyond bloopers: between takes and after ‘cut’

The only time the cast huddle didn’t take place was when Matt LeBlanc dislocated his shoulder and returned for the next episode. And we saw how he got injured. Now that could be classified as a blooper, but it was more in vein of seeing what happened on those sets between takes and after calling ‘cut’. Aside from LeBlanc jumping onto the armchair, there were also reactions to scenes after ‘cut’. David Schwimmer, Matthew Perry and Jennifer Aniston laughing hysterically after the ‘pivot’ scene was such a riot. Perry and Cox’s little off-scene joke for the live audience, while under the covers in that hotel room in ‘London’ was really cute. And then, the mother of it all… Jen and David’s little naps between takes on the sets, cuddling and spooning—all captured! It was just what we needed to see as we were given the biggest revelation of the special.

When David revealed that he had a crush on Jen, and she said that she’d reciprocated it, it took me a second to let that sink in. To find out that arguably the most popular will-they-won’t-they couple in TV history were also almost a couple off-screen was baffling, especially since it was literally brand new information. The person in me who used to be extremely invested in celebrity relationships even had a ‘what if’ moment, as I wondered of the possibility of these two getting together in real life eventually! 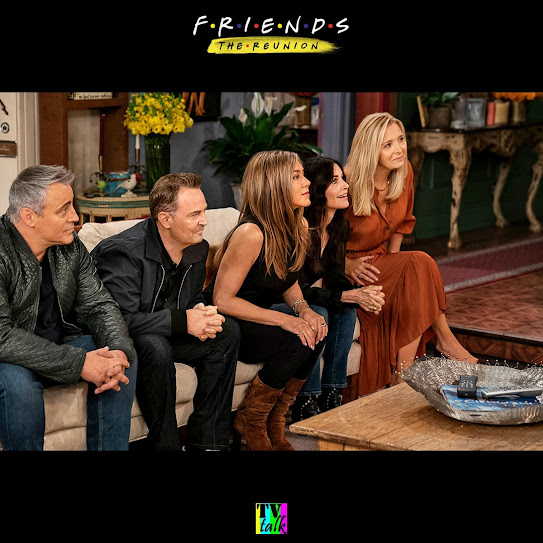 Aside from this, there were other fascinating revelations too, such as how the creators really responded to the audience’s reaction to reshape Monica and Chandler. It was about turning what was meant to be one-time-hook-up storyline to an extended fling scenario, and eventually a full-blown relationship and marriage—all based on the fanfare surrounding it. Matt LeBlanc’s shoulder dislocation and how they wrote his real-life injury into the show was something I had no idea of prior to this. And then another big one was how David Schwimmer hated the monkey that played Marcel, whom Ross loved to bits. It was so funny how he declared it was time for the monkey to ‘f*** off’! I was also quite absorbed by how Maggie Wheeler brought Janice to life—the voice, the ‘oh my god’, and how that signature laughter was inspired by Matthew Perry and Chandler’s jokes.

6. The reunion of the guests

It was such a joy to see not just Maggie Wheeler make an appearance, but also others, such as James Michael Tyler (Gunther), and Tom Selleck (Richard), and even Larry Hankin (Mr. Heckles) and Thomas Lennon (Joey’s hand-twin), who were effectively woven into the little quiz that the cast had going. It was so sweet to see Christina Pickles and Elliot Gould (Judy and Jack Geller) in the audience, with them speaking so fondly about how they’d started to feel like the cast’s parents during the show. It was also endearing to see Reese Witherspoon (Jill Green) talking about how excited she was back during her appearance in season six, to be in a scene where Joey used his iconic ‘How you doin’!’ line on her.

The most glaring absence for me was that of Paul Rudd (Mike Hannigan), who effectively married into the six friends’ family, when Mike married Phoebe. It would have been nice to also see Cole Sprouse (Ben Geller), and even Jane Sibbett and Jessica Hecht (Carol and Susan). Anna Faris (Erica—the birth mother of Monica and Chandler’s twins) would have been a good addition too.

7. The phenomenon and the show’s everlasting impact

Other guests, who had nothing to do with the series also made appearances. At first, honestly, when their names were released, I thought they’d be a waste of time. However, appearances by Justin Bieber, Cara Delevingne, and Cindy Crawford were less than cameos, as they still made their impact on the runway showcasing iconic costumes from the show. Others such as Mindy Kaling, David Beckham, Kit Harington and BTS were simply to add star power to the testimonials from fans who’ve been impacted by the series in large and small ways. It was moving to hear how the show encouraged someone to take charge of their relationship, while it helped others feel less lonely, and saw many trough other tough times. This look at the far-reaching impact of the show is not at all surprising, given the evergreen nature of the series, and how it speaks to so many different people in so many different ways even today.

Speaking for myself, I’m in my 30s now, and I’ve seen the show in sequence and in bits and pieces countless times since the first viewing back in the 90s-2000s, when I was in my teens and 20s. And the show has appealed to different sides of me at different ages, all the while making me laugh and cry, and find a lot of comfort in the relatability of the characters. 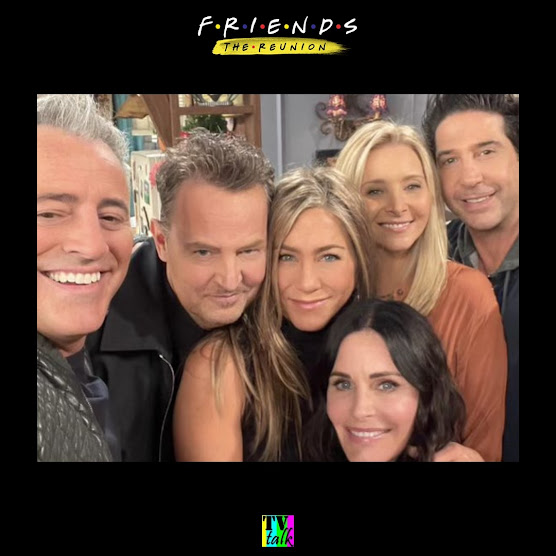 It would have been nice enough to simply see the cast together again, reliving the 10 years of their lives that made them household names, and helped them forge bonds and friendships for life. That everlasting camaraderie was the biggest overarching aspect of the reunion that made it what it was. However, to see the actors enter the sets reconstructed to look exactly as they did on the show was nothing short of beautiful. The last shot of the series, with the camera panning Monica’s empty apartment and landing on the gold picture frame on the door, with that music, anyway gets to me every time I see it. And then to see this event starting with that last scene of the series—and seamlessly giving us a ‘17 years later’ on the same frame that ended the show—set the tone of this trip down memory lane just perfectly. The cast got emotional, as they walked onto the sets thereafter, and so did I. Revisiting a series like this would anyway be a nice treat, but to revisit it through the eyes of the six people who brought those characters to life—and have also been such good friends themselves ever since—was what made it extremely heartwarming. It was a one-of-a-kind experience without a doubt. Nothing else can conjure up such emotions, and especially not after such a long time.
on Friday, May 28, 2021