A fairly unpredictable set of results, and a very different show itself, the 93rd Academy Awards left quite a bit to be desired. But I will commend the organizers and the Academy for pulling it off in times like these. Here are the key highlights of the awards and what was lacking 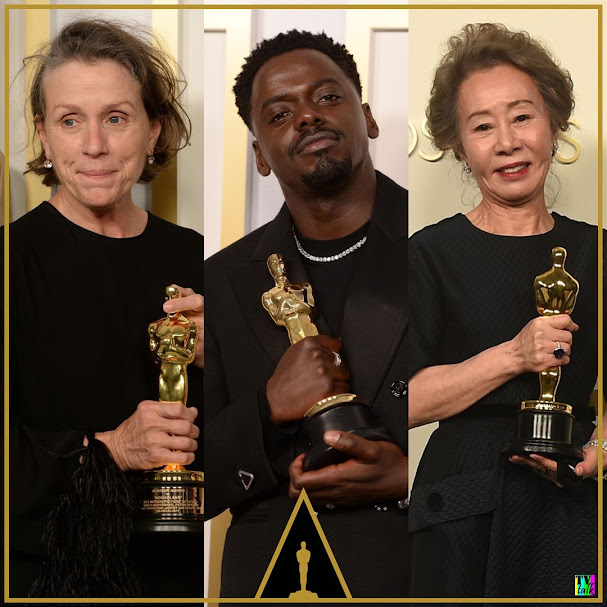 The starkest difference between the Oscars, as we know the event, and this year’s edition was the venue itself. While the Dolby Theatre (formerly known as the Kodak Theatre) has also evolved over the decades, the basic richness that it presents has stayed intact—at least in the way it looks on-screen. Other TV events, such as AMERICAN IDOL’s Hollywood week, and even AMERICA’S GOT TALENT, look more premium because of this venue. And the look of the theater at the Oscars is usually phenomenal. This year though, probably because of the limited audience this time, the organizers wanted a more intimate venue, and they decided to have the main show at Los Angeles’ Union Station. The art deco venue was quite charming and had a character of its own, but it lacked the grandeur of the Dolby Theatre, which was missed sorely. It kind of made the Oscars look like a preliminary event, such as the nominees’ luncheon.

A VERY LONG SHOW, DESPITE THINGS THAT WERE LACKING

The smaller venue, and the more intimate gathering should have also been reflected in the duration of the main event, but it went on for three hours and an extra 15 minutes. Especially with the original song performances shown during the pre-show, and with the lack of a host, it seemed unnecessarily long. While the decision to go without a host hasn’t had a huge impact in the previous two editions of the Oscars, this year, I think a host would have been good. I think with things so different this time, they would’ve done well to have an emcee as a hook for the audience throughout the event. Instead, the show went on—for really long. This was in part due to the freedom given to winners to take their time with their acceptance speeches, which was quite respectful and polite. However, with some people, it is a good idea to give them limited time—and a faint music to signal time running out—because not everyone is naturally inclined to keep things concise. And speaking of music, I really did miss a live orchestra. A DJ behind a console just wasn’t very ‘Oscars’ in my opinion. I mean, if you’re organizing an event with a live audience, getting everyone tested for COVID and all, across gatherings in other remote locations as well, why cut corners when it comes to having a full orchestra of musicians! 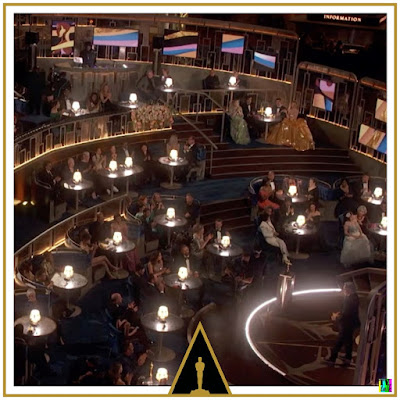 There was however, a little game where audience members were quizzed about songs that may or may not have been nominated in the past. It seemed a little random as the only such break in the midst of the proceedings. Yet, Glenn Close doing that little dance was everything. The presentations themselves were not too bad. It was sweet how presenters such as Riz Ahmed, Laura Dern and Reese Witherspoon had little personal anecdotes to share related to the categories they were announcing. Regina King was a strong way to start, with her big stage presence. Riz Ahmed did well with his interactive introduction of the live-action short category, asking the audience if their careers began with short films, to drive home the point that short films can set strong foundations. Angela Bassett’s presentation of ‘in memoriam’ lent the moment some liveliness—a celebration of the departed artists rather than mourning them. And it was good to see the Dolby Theatre briefly, when Bryan Cranston presented one of the humanitarian awards. I wonder why they didn’t present both together, with Viola Davis presenting Tyler Perry his humanitarian award later in the show.

Perry delivered one of the better acceptance speeches of the night, with his anecdote about how he helped a woman in need with some shoes to ‘take her feet off the ground’, eventually urging everyone to do away with hate, and help people take their feet off the ground. Emerald Fennel was a breath of fresh air when she won the Oscar for adapted screenplay for Promising Young Woman. Winning the supporting actor Oscar for Judas and the Black Messiah, Daniel Kaluuya was whimsical and weird and made us all laugh, with the way he said he was going to party that night, and also giving his parents credit for his existence (and win), mentioning the sex that they had had in order to have him. His sister’s and mother’s reactions, watching from the gathering in London, was priceless! 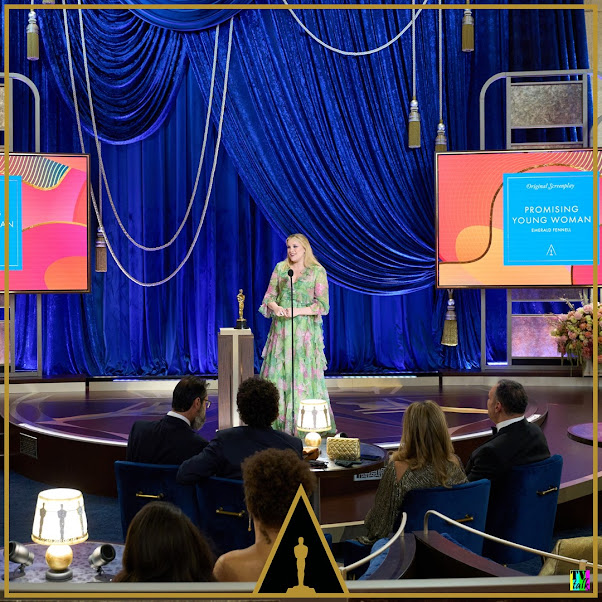 However, the best acceptance speech of the night was by Yuh-Jung Youn, who won the supporting actress Oscar for Minari. Prior to this event, she had stolen the show at the BAFTAs and at the Critics’ Choice Awards before that, with her endearing acceptance speeches, so I was really looking forward to seeing her accept her Oscar. She said it was nice to meet presenter Brad Pitt, and thanked Hollywood. Then she acknowledged the greatness of her fellow-nominees, saying that it didn’t feel right that they were in competition for playing completely different parts in different movies, and that she was simply “luckier than” the others, or that maybe it had something to do with American hospitality towards a Korean actress. She gave a shout-out to fellow-nominee Glenn Close, who was the senior-most actress in the category this time. And she thanked her sons, who ‘made her work’ (probably meant ‘encouraged’ her to work), with this win being a result of that.

THE NEW OSCAR WINNERS—HIGHLIGHTS AND DISAPPOINTMENTS

It was indeed great to see powerful and moving performances such as Kaluuya’s and Youn’s being awarded. I was very happy that Anthony Hopkins won for his stellar performance in The Father. And Emerald Fennell deserved her original screenplay win for the gripping Promising Young Woman. Most other wins were also due, such as the excellent film editing and sound of Sound of Metal being recognized, or the soundtrack of Soul and the screenplay of The Father being rewarded. I was, however, disappointed that my two favorite awards season movies this year—The Trial of the Chicago 7, and One Night in Miami…—didn’t win anything. And they were such good and strong films, even objectively-speaking. Other winning highlights included Chloé Zhao becoming (only) the second woman to ever win for directing, while Frances McDormand won her third Oscar and became the actress with the second-most wins for lead actress, after Katharine Hepburn (who won four). 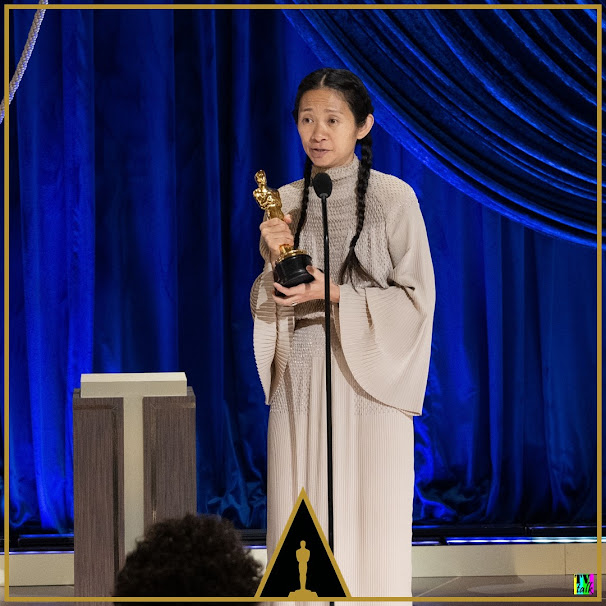 With a few disappointing results, and a slightly underwhelming show overall, there were a few high points that kept things relatively interesting. I look forward to, hopefully, a more ‘regular’ Oscars taking place at the Dolby Theatre next year. I would also appreciate it if they go back to announcing the directing and best picture categories at the end of the show, after the lead actress and actor winners are awarded. I also hope we can go back to the cinemas this year to watch the films that will be in consideration next year.

And, while we hope for better times ahead, here’s a complete list of this year’s Oscar winners.

Best motion picture of the year

Judas and the Black Messiah

The Trial of the Chicago 7

Another Round | Thomas Vinterberg

Andra Day in The United States vs. Billie Holiday

Vanessa Kirby in Pieces of a Woman

Riz Ahmed in Sound of Metal

Anthony Hopkins in The Father

Olivia Colman in The Father

Sacha Baron Cohen in The Trial of the Chicago 7

Daniel Kaluuya in Judas and the Black Messiah

Leslie Odom, Jr. in One Night in Miami...

Paul Raci in Sound of Metal

Lakeith Stanfield in Judas and the Black Messiah

The Father | Screenplay by Christopher Hampton and Florian Zeller

Nomadland | Written for the screen by Chloé Zhao

One Night in Miami… | Screenplay by Kemp Powers

The White Tiger | Written for the screen by Ramin Bahrani

The Trial of the Chicago 7 | Written by Aaron Sorkin

News of the World | Dariusz Wolski

The Trial of the Chicago 7 | Phedon Papamichael

The Trial of the Chicago 7 | Alan Baumgarten

Achievement in makeup and hairstyling

The One and Only Ivan | Nick Davis, Greg Fisher, Ben Jones and Santiago Colomo Martinez

The hypnotizing and haunting, yet lively and uplifting scoring of Soul became the extraordinary backdrop of the film. And I think it’s going to win for it.

‘Speak now’ from One Night in Miami... | Music and Lyric by Leslie Odom, Jr. and Sam Ashworth

A Shaun the Sheep Movie: Farmageddon

The Man Who Sold His Skin | Tunisia

If the Academy has recognized its directing among every film in consideration overall, one can safely say that Another Round has an edge over the others in this category.

A Concerto Is a Conversation

A Love Song for Latasha

If Anything Happens I Love You