'SCHITT'S CREEK', 'THE CROWN' WIN BIG, A POSTHUMOUS WIN FOR CHADWICK BOSEMAN, AND OTHER MAJOR HIGHLIGHTS OF THE 78TH GOLDEN GLOBE AWARDS

The major video conference call that the Golden Globes 2021 were actually turned out to be quite entertaining, even though things were rather low-key

A little more conventional than last year’s virtual Emmys, the Golden Globe Awards on Sunday actually had a stage, and a live audience—at the longstanding venue of the event, the Beverly Hilton in Los Angeles—and a second one in New York! The bi-coastal hosting sounded a little bizarre, but proved to work out quite well. It may not have been Tina Fey and Amy Poehler’s best turn as co-emcees of the event, given that they’ve been such a riot in the past, but considering the limitations this time, it wasn’t a disappointment. Somehow the show felt more crisp than previous editions, and even the secondary presentations, such as the address by the HFPA and the calls for raising funds for Feeding America, and so on, didn’t seem to take the focus away from the main event. Here were some of the biggest highlights of the first major awards of the season:

People in tuxes, in sweats, in pajamas—almost all the nominees were present, and seeing all their camera views together in the initial part of the telecast was probably even better than seeing them all physically present together at the venue. The LA venue itself was occupied by real stars, real heroes as the audience. It was a sweet gesture by the event organizers to invite first responders to have a fun evening. 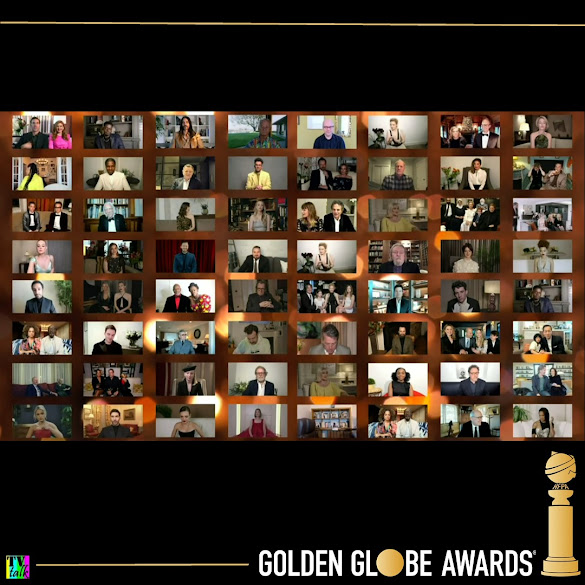 They’re always a delight to watch, and it was nice to see them hosting again. Even thousands of miles apart, their banter and on-stage chemistry was exciting to watch. Their monologue was well-paced and to-the-point. A couple of their shout-outs were really funny, especially: “Jim Parsons and Kaley Cuoco are nominees tonight, which is huge for the ‘bazinga’ community!” Even their Globes-deprecating humor was hilarious, and the dissing of awards in general. “We all know that award shows are stupid,” said Fey. Poehler added, “They're all a scam invented by ‘Big Red Carpet’ to sell more carpet. We know that.” 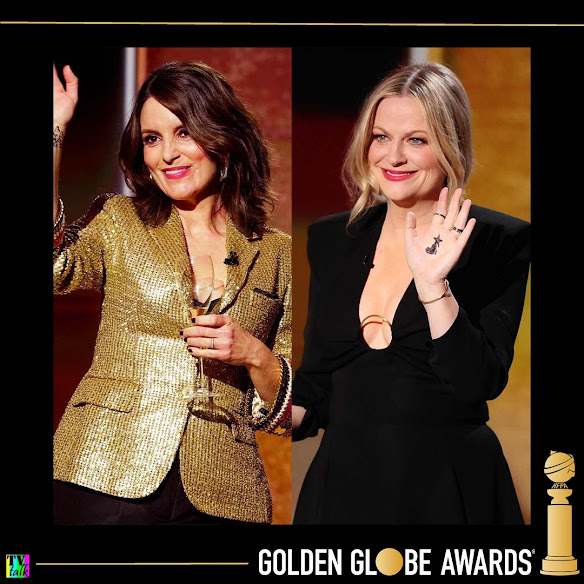 Jason Sudeikis, wearing his much talked-about hoodie, on winning lead actor comedy for TED LASSO seemed quite scattered, and fellow-nominee Don Cheadle gestured him to move it along. However, Sudeikis ended his with a sweet thought: “The best actor is the person you’re acting with,” acknowledging his fellow actors from the Apple TV show. Catherine O’Hara’s speech, on winning lead actress comedy was heartwarming. “They created an inspiring, funny, beautiful family love story, in which they let me wear a hundred wigs and speak like an alien,” she said, referencing her character Moira Rose’s quirks in SCHITT’S CREEK, and concluded, “To our family in lockdown … I hope it won’t take you six years to realize your greatest asset is who you manage to love!” 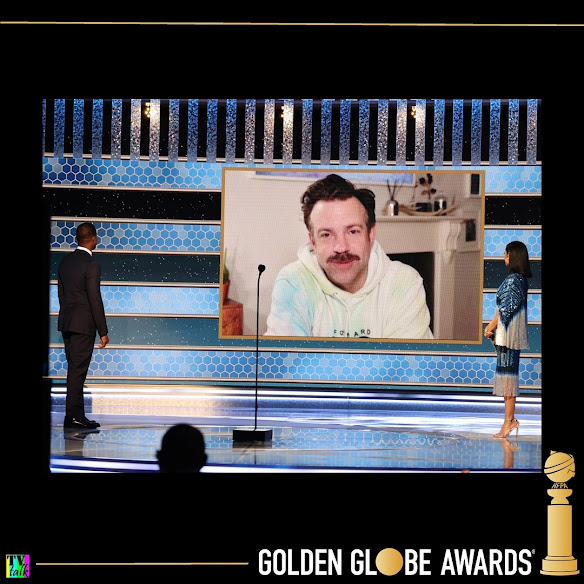 Mark Ruffalo, who won lead actor in a limited series for I KNOW THIS MUCH IS TRUE, spoke of how Mother Earth needs us now, and urged people to come together. “What connects us is far greater than what keeps us apart,” he said. The speeches by THE CROWN winners, Emma Corrin, Josh O’Connor and Gillian Anderson were all so enthusiastic and sweet as well, with fellow-nominee Olivia Colman cheering each one on.

The most heartbreaking speech though was by Taylor Simone Ledward Boseman, the wife of the late Chadwick Boseman, who accepted her husband’s win for lead actor in a motion picture, drama, for Ma Rainey's Black Bottom. After the tearful thankyous, she concluded with, “…And I don’t have his words, but we have to take a moment to celebrate those we love. So thank you, HFPA, for this opportunity to do exactly that. And, hon, you keep ’em coming. Thank you.” 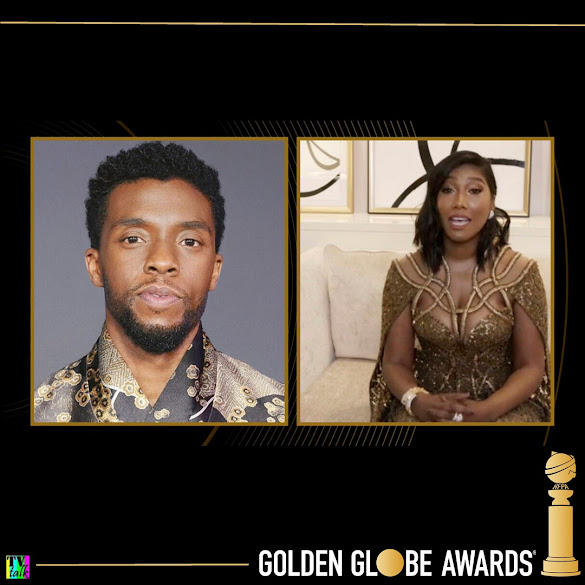 4. The best presentations—Ben Stiller during the lockdown, and nominees and their symptoms

Ben Stiller’s always been funny on an awards stage. Remember him as a blue ‘avatar’ at the Oscars many years ago? This time too, his content and delivery were hilarious. “It's hard to believe that it's been a full year since the last Golden Globes but like many of us I've used that time to really look inward and grow,” he said. “I've come to fully understand the nature of cryptocurrency. I read a book. I finally got around to dyeing my hair gray. And like so many other resilient Americans I learned to bake a delicious banana bread in the perfect form of a Golden Globe,” he concluded. 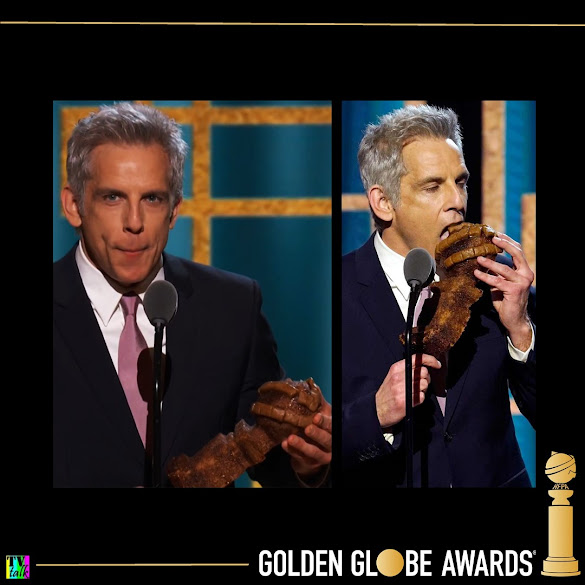 Another funny sketch was the one where actors spoke of symptoms they were experiencing, which real doctors and nurses diagnosed as fake conditions that they were suffering from as a result of films or TV from the lockdown year gone by. Lin Manuel Miranda, for instance, was experiencing ‘symptoms’ that have been going around in Canada for a while, which people in America have only caught in the last year or so. The doctor said it was SCHITT’S CREEK. Renée Elise Goldsberry, on the other hand, was feeling ‘hot and bothered’, which was diagnosed as the BRIDGERTON. But the funniest was Tina Fey, who was down with the ‘Thatcher’ for ‘involuntarily’ beginning to sound like Gillian Anderson’s Margaret Thatcher from THE CROWN.

5. Jane Fonda’s acceptance of the Cecil B. DeMille Award

In one of the best lifetime achievement acceptance speeches I’ve heard, Jane Fonda was absolutely captivating as she took the stage, with her poise and her beautiful words, as she saluted all the work in film and television from the past year that moved her. She gracefully spoke about diversity in storytelling. She said that inclusion would only mean acknowledging what was true, and would give everyone’s story a chance to be seen and heard. She was engaging and charming, and ended on a high. “After all, art has always been not just in step with history, but has led the way. So, let's be leaders, okay?” 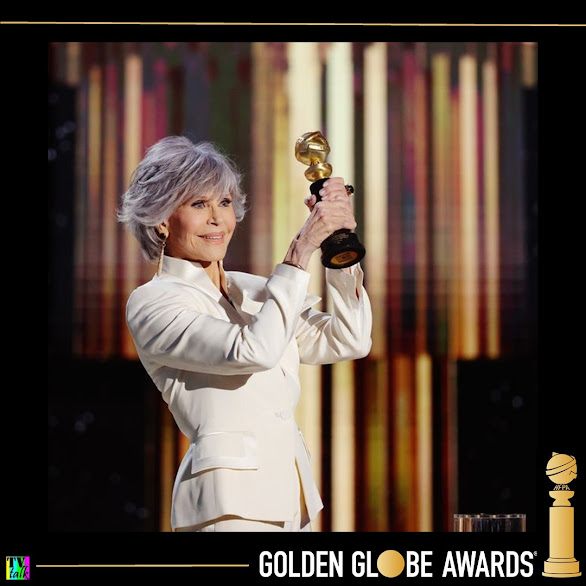 Despite limited scope for high-production, and a showbiz-led live audience who often impact the direction each presentation and speech takes, the 2021 Globes were not bad at all. It did seem a little rushed towards the end, after a relatively slow-paced first hour. But limiting the event to just about two hours worked in its favor. I would love to watch a big, live event with people physically present again. But if other awards (even the Oscars, were they to go the remote way) can give us something like the Globes did, I wouldn’t be too disappointed.