PREDICTIONS FOR THE 78TH GOLDEN GLOBE AWARDS (2021)—ALL TV CATEGORIES

THE CROWN, THE QUEEN’S GAMBIT and SCHITT’S CREEK will win the big prizes. Find out why, and take a look at other predictions for the TV categories, at Sunday’s Golden Globe Awards 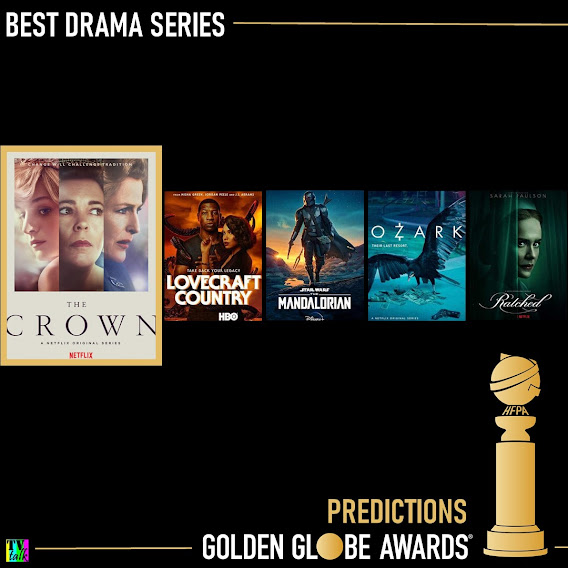 THE CROWN has won before, for its first season, but not since. Although the HFPA do like to give it to new shows or those that haven’t won before, this last season of THE CROWN probably started a lot more conversations than its debut season did, and it was probably as good—even arguably better than the other two seasons in between that didn’t win. THE MANDALORIAN could also win here, but I suspect they will crown the right show. 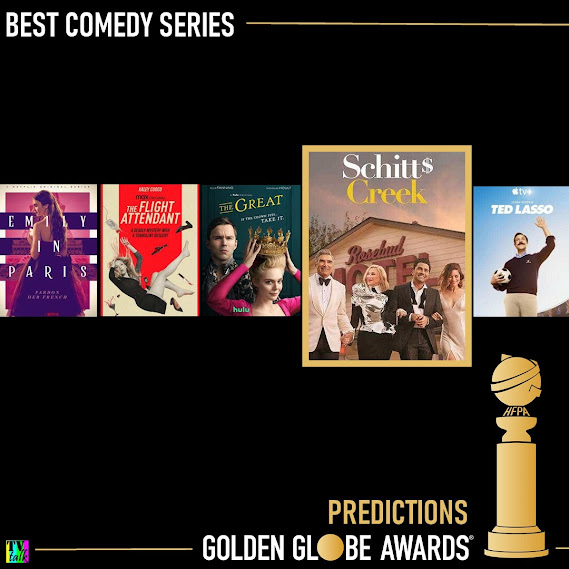 There are some great contenders here. I would give it to any of these shows (not EMILY IN PARIS though). TED LASSO stands a good chance, and I believe its time will come. But, this is SCHITT’S’ year. Even if there isn’t a clean sweep like we saw at the Emmys last September, I do believe this big prize will go to the show for its sweet swansong. 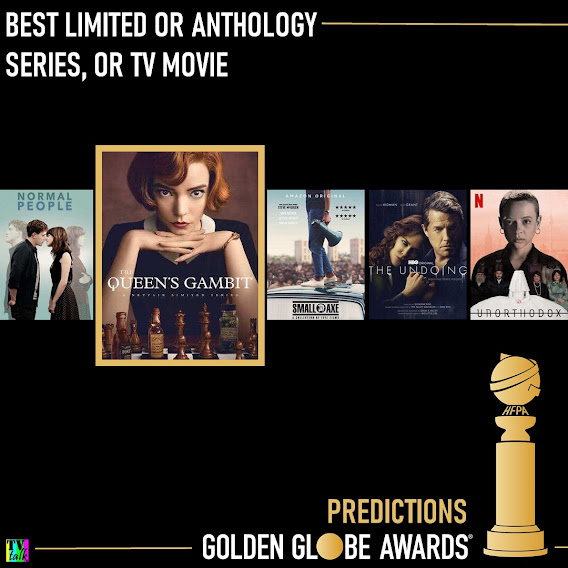 I think this one’s going to come down to THE UNDOING or THE QUEEN’S GAMBIT. I believe the latter was the superior show of the two. And then it also became the most-watched limited series ever on Netflix. It also checks a lot of awards boxes—troubled protagonist, orphan, substance abuse, period drama, underdog story, and so on. But it was actually much more than that, and I think it would definitely deserve to win.

Best actress in a drama series

She played one of the most beloved public figures of our times, in a show that has been the talk of the town, after years of viewers waiting to see Diana’s story in it, and she nailed the role of the princess, with all her vulnerabilities. Emma Corrin is winning this one. Though I wish Olivia Colman would, since this is also her last season as the royal. But Corrin played Diana with charm and sensitivity—and that’s what Diana was known for, so she’d deserve it.

Best actor in a drama series

Josh O’Connor is winning this one, again, for being a part of such a big story covered in THE CROWN season four, which we’d all been waiting for, for years. He was also really good, portraying the angst and arrogance with such conviction, and doing such a thorough job with the diction and body language of the Prince of Wales. He’s up against some big names, so it will be all the more special for him, and a very interesting awards result indeed.

Best actress in a comedy series

This could very easily go to Kaley Cuoco for THE FLIGHT ATTENDANT, especially since the HFPA have been known to award fresh faces and shows, as opposed to frontrunners. However, this is still SCHITT’S CREEK’s awards cycle. Even if none of the other actors from the show win Globes, I have a strong feeling Catherine O’Hara definitely will. She was exceptional as Moira Rose. Besides, O’Hara hasn’t won before in this category, so it will still be a fresh face.

Best actor in a comedy series

Emmy winner Eugene Levy is a strong contender here, and I won’t be surprised if he wins. However, TED LASSO is going to get some Globes love, and even if this isn’t its year for best series, I think Jason Sudeikis will take the win for the show in this category. And he’ll deserve it for bringing such sincerity and heart to the role.

Best actress in a limited or anthology series, or TV movie

It’s between Blanchett, Kidman and Taylor-Joy. The latter was quite a breakout success, and Anya Taylor-Joy does deserve a lot of credit for the show’s success even, as she carried THE QUEEN’S GAMBIT almost as a solo act. I believe the HFPA will see that too and give it to her.

Best actor in a limited or anthology series, or TV movie

I think Hugh Grant stands a good chance to win this, especially since he presented such creepy villainy, which we hadn’t really seen from him before. However, Mark Ruffalo! Just seeing a show-reel of his from I KNOW… could convince anyone to give him an award for it—even the voting members of the HFPA.

Here’s a tough race for sure. Emmy winner Annie Murphy is a frontrunner. However, THE CROWN is more recent, and Gillian Anderson was absolutely terrific as Thatcher. Just seeing her in the promo before the release of season four made me sure she’d win awards for it. And to top that, she played an iconic figure in history, in probably the most talked-about season of one of the most popular shows of our times. This role has awards written all over it.

This is a tough one to predict. The clear frontrunner is Daniel Levy, and I hope he wins. However, the HFPA tend to lean towards drama in these mixed categories, so it’s quite possible that this goes to the highly talked-about THE UNDOING’s Sutherland or THE COMEY RULE’s Gleeson. Given the recent political climate in America, I say it’ll be Gleeson.