As we celebrate the end of this dreadful year, I take a look back at some of the most noteworthy seasons of television that I watched in 2020 that left me awed or amused, with their refreshing stories, terrific portrayals, captivating charm or all of the above

When THE CROWN first began, the idea of a new cast every two seasons seemed absurd, considering how much one connects with the actors who bring the characters to life. When season three started, it even took some adjustment to warm up to the new faces of the same royals. By season four though, it didn’t feel like they weren’t playing these characters all along, and by the end of it, I was so sad that that’s all to have seen of this cast. Of course, the additions of the Emma Corrin and Gillian Anderson have been absolutely exemplary. Their fantastic work as Diana and Maggie Thatcher brought to life some very compelling storytelling, and brought to light things that I had no idea about, such as Diana’s eating disorder and the queen's media quarrel with the prime minister, with great sensitivity. Yet, even though the queen’s story might have been in the background through some of the season, Olivia Colman continued to shine as the sovereign, especially in the episode about Michael Fagan, the palace intruder, which was one of the best of the series. Josh O’Connor’s Charles and Helena Bonham Carter’s Margaret added to the richness of a show that is always a treat on so many levels, with its nuanced dialog, and sumptuous visuals, among other aspects. Some have even called this the best season of the series, and though I’d find it hard to pick my favorite season, I’m not surprised. 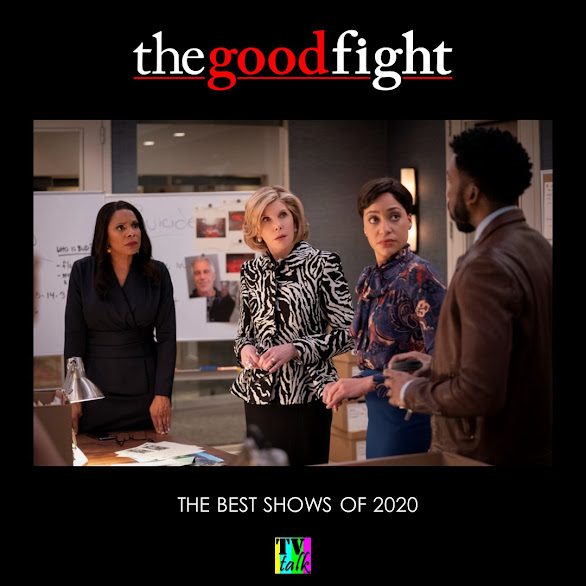 THE GOOD WIFE/FIGHT are among the best TV shows (or franchises) made, and till date it baffles me how good the former was, despite churning out 22 episodes a year. Still, on network TV, it had its limitations, which the latter does not, being a streaming show. Considering that, THE GOOD FIGHT takes its political rhetoric and throws it on us quite blatantly and quite refreshingly at that. Even so, in its third season, they did go a little extreme with it, almost making it campy with the Melania Trump storyline and the anti-Trump secret group. What one missed was the terrific legal drama that is the heart and soul of the franchise, and I think season four not only returned us to that, but continued its rhetoric in a well-balanced and extremely clever way. The episode that dealt with Olympic qualification standards and disparity in gender, as well as issues of race, was thought-provoking and gripping. The alternate reality in the premiere, where Diane is living in world where Hillary won, was genius. And then the ‘memo 618’ and Jeffrey Epstein episodes just hit it out of the park. I’m constantly disappointed that this show doesn’t get its due, especially at the Emmys, which keep nominating the now-overrated THIS IS US, and now-ridiculous STRANGER THINGS. 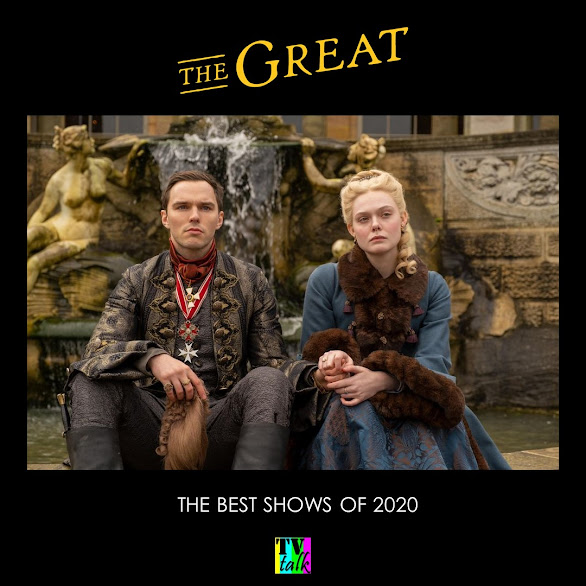 This ‘occasionally true story’ from the writer of The Favourite started out a bit jarring and made me cringe a little, but the visual treat that it was kept me going, and I’m glad that I did. Once you look past the extremes of the twisted humor and the political incorrectness, it’s actually quite a riot. The delightful Nicholas Hoult’s Peter III had an endearing quality, despite the emperor’s narcissism and sexism, even when he says things like, “I am of gentle heart and massive cock!” Elle Fanning took on the future Russian empress’s role with grace and conviction, and her mission to [Spoiler Alert] overthrow her husband and rule Russia herself is the hook that kept the show engaging, and made it very binge-worthy. The snappy and unapologetically hilarious dialog and the beautiful costumes and sets kept things exciting, even visually, right till the very last frame. I was just disappointed that it didn’t earn more nods or wins at the Emmys this year. Hopefully more people discover the greatness before season two premieres. Until then, huzzah! 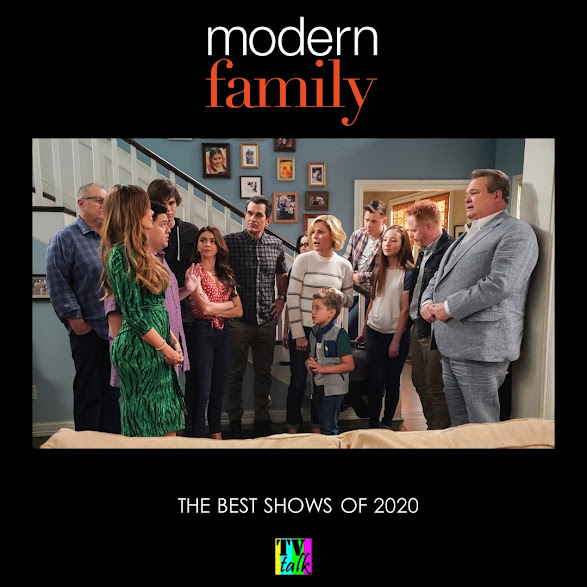 Throughout its 11-season run, MODERN FAMILY was never a disappointment. Sure there were a few episodes among their 250 that weren’t as funny as the rest, but it was always a show that was consistently well written and executed, with a healthy mix of clever humor in dialog and comedy of errors one often saw. The characters were beautifully developed and each one had a distinct role to play, even as the kids grew up. And with its final season, they maintained everything that was good about the series, giving it a perfect little send-off, even though I’m sure they could have gone on with it for a few more years at least. It was equal parts emotional and entertaining, as it did justice to all the characters and their bonds with each other. It’s going down as one of my all-time favorites, and the final season simply cemented its place on that mental list I have in my head.
Click here for a complete review of the series-ender 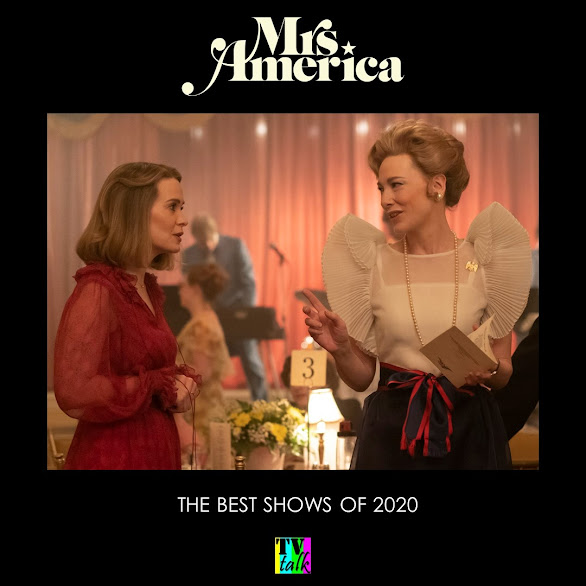 We don’t often see a strong conservative perspective on issues depicted by liberal Hollywood, and I perhaps wouldn’t even agree with that side anyway. However, to be fair, it’s never a bad idea to hear both sides of an argument and consider them. MRS. AMERICA gave us that and so much more. Despite leaning liberal, the show managed to center the narrative on a conservative protagonist, who was portrayed with infuriating perfection by Cate Blanchett, and it showed us the other side better than most shows do. I often struggle to understand how women can be conservative, especially when it comes to matters of gender equality, but now I maybe find it slightly easier to grasp where they’re coming from, owing to Phyllis Schlafly’s story, even if I was against what she was fighting for. The narrative itself was crisp, compelling and did justice to all the fine performers, each of whom got their time to shine, especially Rose Byrne, Margo Martindale, Uzo Aduba, Tracey Ullman, and Sarah Paulson, all of whom were fantastic in their roles. 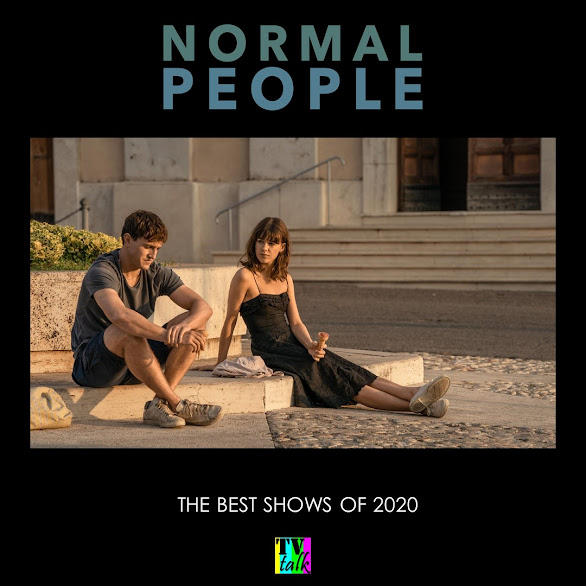 This heartbreaking and gut-wrenching dissection of the constantly evolving and very layered relationship between two people through the defining years of their lives wasn’t always easy to watch, but it was very real. Relationships that are so co-dependent almost and infused with heightened passion and other big feelings are often extremely complicated and don’t end with a ‘happily ever after’ and a neatly tied bow. It may not have been a very feel-good show, and was almost depressing and frustrating even, but it was such a tremendous character study. As they peeled back the layers of the messy and the tragic sides to the two protagonists and their relationship, the actors were fascinatingly raw and real, evoking all sorts of feelings one didn’t know one had. 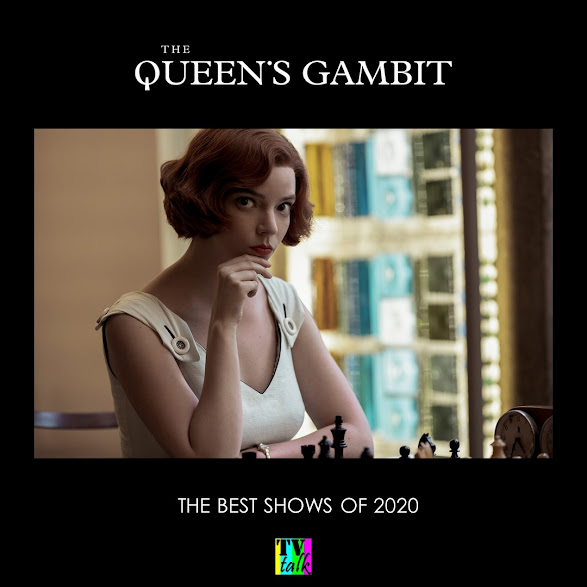 I’ve never really been good at chess, nor have I bothered to learn how to play strategically. With only basic knowledge of the rules of the game, the chess aspect is not what drew me to THE QUEEN’S GAMBIT, but I soon realized I didn’t need to know more about chess than I did know in order to enjoy the show. It’s all about the fictional but very real Beth Harmon and how she overcomes inner demons and personal challenges, as she finds control and comfort in 64 squares. The brilliant characterization and the supporting cast, along with the well-paced plot obviously had major roles to play. However, it was the directing and the general treatment of the series that had this mesmerizing quality that drew me into that world very early into the series. The quieter moments depicted were particularly captivating, especially owing to Anna Taylor-Joy’s soothing screen presence and the stunning background score. It was a triumph of good writing, beautiful performances, and overall tone. I do see why it’s become Netflix’s most-watched limited series ever, and I have to admit, I am almost impressed with Netflix’s general audience for it. 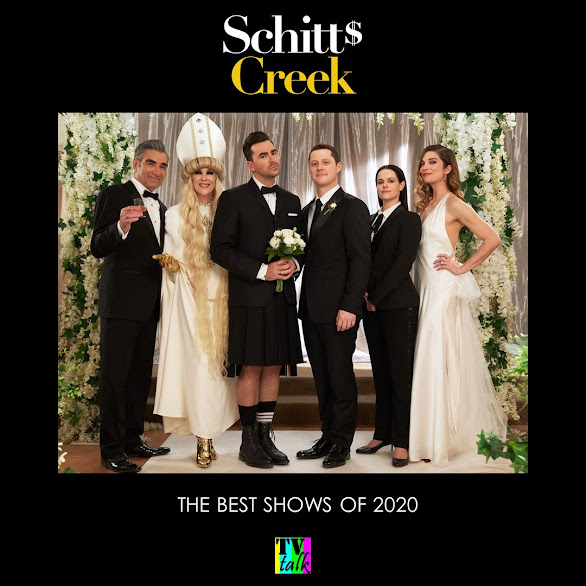 Okay, I might be a little biased in including SCHITT’S here, since I did watch the entire series during the lockdown. However, I can confidently say that if I were to only consider the final season, the show would still feature on this list. With most acclaimed shows generally at their peak during their first three seasons, it rarely happens that a show’s best work is towards the end of its run. And SCHITT’S CREEK turned out to be a very fine example of that. The final season was a step up from an exemplary season four and a stellar season five, while it tied up storylines for not just the Roses, but even gave us sweet bookends to other great characters such as Stevie. It was one of the best series-enders I’ve seen, with equal doses of hilarity and heart. The show certainly went out on a big high and deserved its whopping seven Emmys (a first for a comedy series winning all the major categories). 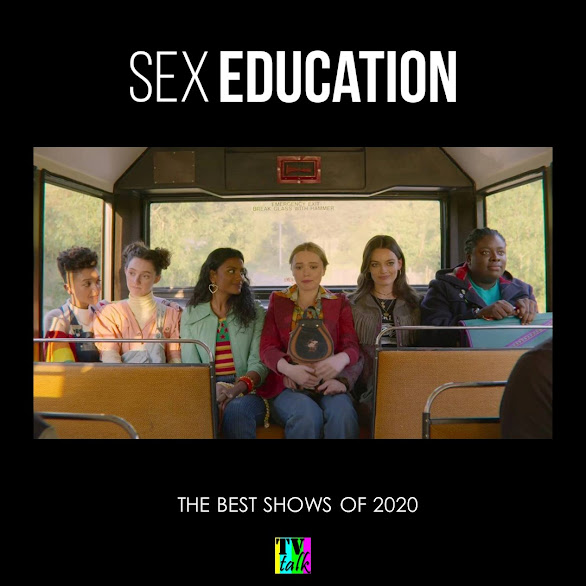 SEX EDUCATION is a breath of fresh air just like small-town UK is. With sheer honesty in its portrayal of sexual awkwardness and growth, it can evoke a few cringes along he way, but it always carries a lot of heart. The high schoolers at its center are flawed yet very relatable in many ways, and the fact that the show goes beyond the central few makes especially the second season a real triumph. Of course Gillian Anderson’s commanding presence and her intimidating humor rule each scene she’s in, but it’s also the other less important characters in school who make a mark. Connor, Lily, Ola, Jackson, and Isaac—all have distinct and even endearing parts to play. Aimee had one of the simplest yet complicated and very impactful ‘me too’ storylines told in a TV series, and it brought together the female characters like nothing else had. Of course Otis, Maeve and Eric continued to shine with strong performances by the actors. SEX EDUCATION works on a lot of levels and I hope they keep bringing us heartwarming stories about underdogs and sexual awakening with their subsequent seasons. 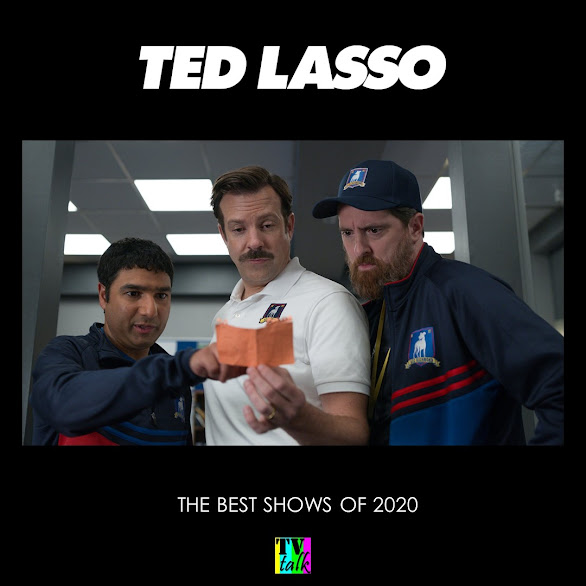 Having never understood American football, and never really being terribly interested in football (or soccer) either, you could imagine how I was not at all drawn to this show. However, I read some very encouraging reviews of this series and several months after it was released, I went through all 10 episodes, hooked by the second one itself and absolutely cheering for Richmond through their big games, especially the Man City match! The show had a single purpose—to tell a heartfelt feel-good story about positivity and niceness, and that shone through every storyline, sub-plot, and character arc. Jason Sudeikis’ Ted Lasso stole my heart, as he killed with kindness and his uplifting spirit. All along, the humor was clever, and sharp, while the story itself was familiar, but very refreshing, as the show steered clear of some very obvious tropes, which by itself makes it a winner. However, the overall impact and its consistently endearing quality made me instantly recommend it to many. It’s proven to be a real gem of a series—certainly a lovely discovery for me. “We’re Richmond till we die…!”
on Tuesday, December 29, 2020