Spoiler alert: Read on only after you’ve seen the season four finale of THIS IS US, or if you don’t care about spoilers

“I’m sick of chasing ghosts,” said Kevin, as he went back into the house to tell Madison that he was ‘all in’ to be a dad to his unborn children that she was pregnant with. And I couldn’t help but feel a little relieved to hear someone say that, or something to that effect, on this show, where everyone seems to live a little too much in their past. Yes, it’s a show set across numerous timelines, and how those timelines inform each other, but sometimes the narrative should just leave the timelines of the past to tell us, the audience, what happened back when…and not be a means for the characters in the present to constantly mull over. It’s unhealthy and unreal, and it just takes away from the moment sometimes. It should be for the audience to reflect on the past, having known these characters for a while, knowing how events of the present might make them feel. Instead the show constantly forces the audience to confront the past every time a little detail in the present has even a slight connection with what’s happened before in their lives.

However, yes, it’s true that many of us carry our past as baggage, as it weighs down on everything in our present. If that starts to be a problem, there’s obviously a need to deal with what’s gone, and move on from it. Clearly, Randall Pearson has had that problem for a while now. He’s been unable to shrug off the feeling that he failed to save his father, as well as the grudge he apparently still holds against his mother for keeping his biological father—William—a secret from him. He confronted both these things with therapy, yet dealt with it all in probably the worst way he could have. On the one hand, he said that he wasn’t going to ‘re-litigate’ the whole issue of William with Rebecca, claiming that he didn’t want to jeopardize his relationship with her. And then he goes and emotionally blackmails her with exactly the same thing, to use as leverage against her to make her participate in the clinical trial that she’d already told him she didn’t want to do. If he had simply asked her to know all about the trial before turning it down, or if it had been a terminal illness that she was refusing treatment for, it would have been understandable. But he completely disregarded her wishes and is making her sacrifice probably the best nine months she has left in her life, which she’s doing out of a misguided feeling of guilt or remorse. And as we saw in the finale, even Beth doesn’t approve of this, proving to us again that Randall doesn’t deserve her. Still, when Randall tells Kevin in the finale that in the future they’d regret not doing what he was doing now, in order to have more than just those nine good months with her, I did for a second think from Randall’s perspective. But then I remembered, Rebecca is clearly in her 70s (she was most probably in her mid-30s when her almost-40-year-old kids were born), so every minute of lucid happiness with her family means the world to her, and Randall is not even willing to see that from her perspective.

And then to make things worse, Randall spews such venom on Kevin, it left me despising Randall more than I ever have (and I’ve never been a fan of Randall at any age, except for maybe sometimes liking kid-Randall). Kevin may not have assumed a sense responsibility towards the family like Randall did over the years, but that doesn’t mean he’s been absent or unavailable for his family. We’ve seen Kevin come through for his brother during Randall’s anxiety attacks more than once. He’s been Kate’s person. He’s helped Rebecca in his own ways. And he’s even been an awesome uncle to Randall’s kids. What has Randall ever done for Kevin aside from looking down on his career choices and personal life! And now he has the nerve to tell Kevin that their dad died being ashamed of Kevin… Firstly, Jack could never have been ashamed of any of his kids. Secondly, this is just Randall at his worst—trying to prove a sense of superiority by hurting his brother and dishonoring the memory of the father he wishes he had saved. And what Kevin said about the worst day of his life being the day Randall became a part of their family was clearly him lashing out at Randall trying to hurt him back. And one could see that it pained Kevin to have brought their quarrel down to that, while Randall had looked on with contempt from his high horse all along. 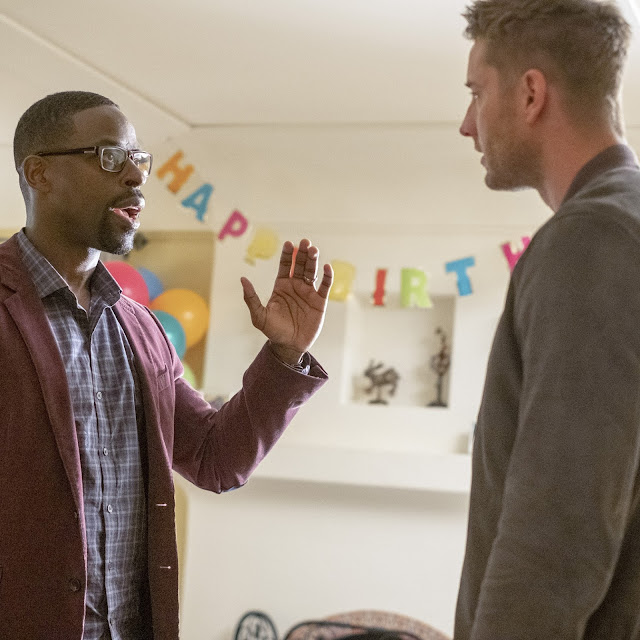 From a finale point of view though, their showdown was executed extremely well. It was intense without becoming hysterical, and the restraint really amped up its impact, as it highlighted the depth of the animosity. One thing was seriously lacking though—the absence of Kate in all of this. Of course she’d have something to say about all of it, and she was a part of the conversation before she took off with Toby and little Jack to the hospital. Yes that subplot was important, and eventually Kate’s reaction to the brothers’ conflict is surely going to be explored next season. But to not have her there, to mediate, take sides, or just be caught in the middle, was a missed opportunity for Pearson drama, especially considering that her relationship with Rebecca has been so good lately, and that she didn’t even get a chance to weigh in in New York.

Aside from that, it was quite a finale, despite Jack and Rebecca’s unnecessary and unrealistic seeking of emotional support from their OB/GYN. It was severely indulgent but still sweet. What was a total waste of time though was showing us Madison’s OB/GYN trying to train his horse and have a moment with his daughter (do we really care?!). I mean, there has to be a limit on how much they can delve into the individual stories and conditions of characters who are at best peripheral in the main cast’s lives (especially since the show is limited to six seasons, and just 18 episodes per season). It’s what made the season opener so frustrating, but thankfully in the finale it was far more limited than in the premiere. If they had used the time instead to involve Kate in the brothers’ altercation or at least make her a witness to it, I think the finale would have been perfection. Without it, I suppose there’s even more to look forward to in season five than there anyway would have been. There are so many unanswered questions, about Rebecca’s condition, the future, Kevin’s wedding ring in the future, Nicky in the future, Kevin and Randall’s tense-yet-optimistic body language towards each other in the future, and so much more. And let’s not forget, Kevin and Kate still don’t know exactly how Randall made Rebecca agree to the clinical trial. I do hope we see their reactions to how low Randall stooped to get what he’s sadly mistaken to believe is the best for the family.
on Wednesday, March 25, 2020

Email ThisBlogThis!Share to TwitterShare to FacebookShare to Pinterest
Tags: cliffhangers, Family Drama, review, Television, This Is Us