THE ‘GREY’S ANATOMY’ PREMIERE—LESS THAN A SWEET 16

I’ll admit—I’m always happy to see a new episode of GREY’S. So a season premiere, after a four-month hiatus, always conjures excitement. This year’s season premiere, though, left a lot to be desired. Here’s what was wrong with it, and what I hope this season will do

Spoiler Alert: You are advised to read on only after watching the season 16 premiere of GREY’S ANATOMY. Definitive plot points have been mentioned.

When GREY’S left us in May, there were cliffhangers all around us. Jackson was missing in the fog, with Maggie looking for him. Teddy got back together with Owen, while Tom Koracick was left setting up a crib for their baby. Amelia kind of broke up with Link. Jo checked herself in for psychiatric help, after finally admitting her issues to Alex. Andrew DeLuca went to jail for something Meredith did. Meredith got fired for it, and so did Richard and Alex for being accomplices. Aside from the firing bit, everything was resolved, and extremely unsatisfactorily.

Jackson’s disappearance was the gimmickiest of the lot, especially because of how ABC promoted the premiere, implying that he’d been seriously injured or may even be in grave danger. What we got from it was the surgical case of the week—some hikers he found who were literally in a cliffhanger situation. Of course his breakup with Maggie was inevitable and came as no shock. It was among the few developments in the premiere that were handled well. In fact, it was quite nice to see him bonding with Vic (from STATION 19), and there was this, sort of, instant chemistry between them. I’m not a fan of Maggie, and didn’t quite like her and Jackson together much. But I did feel slightly bad for her when she tells Jackson that they don’t like each other and hence he and Vic are none of her business, especially knowing that she was absolutely right. Kelly McCreary did that scene really well, hiding the pain with her steely exterior. McCreary really makes me want to like Maggie sometimes.

I do wish that this season, the breakup makes Maggie pull herself together and grow up a little. She needs to take a step back and assess her own life and whatever she believes people owe her, emotionally and otherwise. She owes that to herself. On the other hand, I think Jackson should really take some time for himself, even though he has a bond already with Vic. I mean, they have both admitted that neither is ready for anything yet. Also, I think it’ll be fun to see Jackson single for a while. I don’t remember what that was even like. 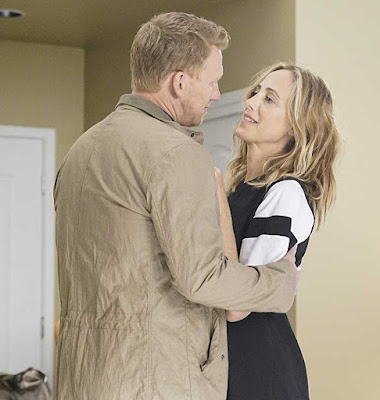 OWEN-TEDDY-TOM
It was so heart-breaking last season to see how the crass but well-meaning and utterly caring Tom Koracick was left setting up a crib for Teddy’s baby, while she was getting back with Owen. Tom and Teddy weren’t going to last too long, especially since it’s been quite apparent that Owen and Teddy have been end-game. Yet, Teddy and Tom had something sweet, and I did expect more emotion with their breakup. I didn’t want to see melodrama, but I also didn’t want it to simply be an assumption that Tom makes, with Teddy barely making a half-hearted apology—which is what happened. I love Teddy; always have. And I like that she had something of her own, after her late husband Henry, something that didn’t involve Owen. So it was disappointing to see a sweet bond end, especially in this manner.

I do wish we see some more closure on this front. As for Teddy and Owen, they’re ready to start a life together and all, but I hope it comes with some adjustment, some amount of dealing with being a conventional, co-habiting, co-parenting couple. I feel this way especially since they’ve never really been together that way, having simply gone from friends to what-ifs prior to this. So I’d like to see what makes them tick as a couple, because frankly, I really just saw them as the best of friends, like Meredith and Alex are, and it surprised me when their relationship took a romantic turn. And with Tom, I look forward to what they do with him, since he is definitely going to be around, with Greg Germann having been promoted to series regular this season.

AMELIA AND LINK
Their relationship has probably been the most refreshing of GREY’S romances lately. I loved them as soon as they started flirting when they were both at that conference last season. They look great together, they have this cute banter, and they have some hot chemistry. Also, their relationship bloomed with excitement after Meredith’s loss (in choosing DeLuca over Link) became Amelia’s gain. While Meredith and DeLuca’s chemistry fizzled and became a tired relationship almost overnight, Amelia and Link have had that spark throughout, even when things got a little serious when he went with her for that tense dinner with the Shepherds. So it’s nice now to see them embracing what they have, after taking a step back to assess what they want from this relationship.

However, why, oh why would they go down a pregnancy path! It’s too soon. I wanted to see them together a bit, trying to figure this sweet, new, exciting relationship out before something definitive like a pregnancy were to come along to throw them into a make-or-break situation. I certainly don’t want them to go into a zone of angst and high emotions. I do hope the writers have a better plan than that for these characters. 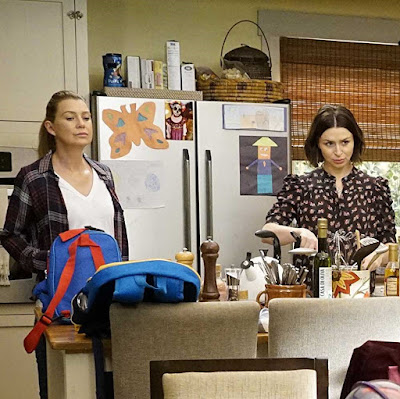 ALEX AND JO
Last season, Jo unraveled and unraveled hard. It put a strong strain on her relationship with Alex, so soon after they’d finally gotten married. It drove Alex crazy that she wouldn’t talk to him, and understandably so. We literally saw what he went through when Izzie ghosted him, and he’s also had to deal with his mom, and there was also Ava/Rebecca. This emotional wringer with Jo has been poetic in a tragic way, so it was nice to see the light at the end of the tunnel, especially after Jo gave him an ‘out’ and he chose not to take it. It was especially meaningful because it was a choice he didn’t take lightly. He committed to sticking together after giving it some serious thought, and that’s what I love about their relationship. They never overdo the emotional presentation of the deep bond they share, yet we know it’s there. However, I do think that it happened all too quickly. And I do hope that we see how they find their way back to each other in a more practical, day-to-day space, beyond simply making big commitments and grand gestures.

MEREDITH AND ANDREW
These two showed so much promise when they hooked up last year, after that awkward kiss at Alex and Jo’s wedding in season 14. They were hot, they were endearing, they were cute, until DeLuca started to act like he was entitled to be with her, and Meredith toyed with Link and him, leading both on, acting superior and then eventually being a bitch to Link. That’s when I lost interest in ‘MerLuca’. Yet, they could have kept the spark alive, but they went down a serious path, with his family issues and so on, before we even had a chance to see them together enough to want them to become a serious couple. The relationship brought out sides in them that I didn’t like, and soon, I couldn’t care less about them. So it was no surprise then when I didn’t feel shook up when he took the blame for her insurance fraud. Yet, I wanted more from it, from a plot perspective, than a quick dropping of charges and even Meredith getting away with only being given community service. Though there is some hope for that cliffhanger leading to more than just that, with her medical license being threatened. Let the complex and compelling fight begin. That aside, I still don’t like MerLuca together. I can only hope they’re not end-game. And no, I don’t say this because I think no one can fill Derek’s shoes. I don’t feel that way (Meredith's been better off without Derek). I want to see Meredith in a good, meaningful, interesting relationship, and her relationship with DeLuca is certainly not all that. 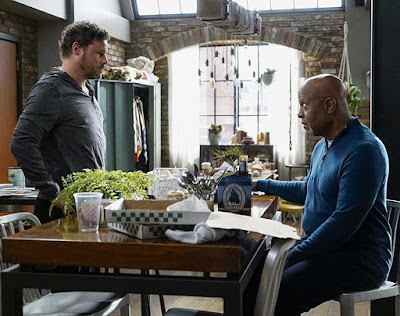 RICHARD, ALEX AND PAC-NORTH
The one thing I’ve never grudged GREY’S ANATOMY for is their over-the-top cliffhangers. Even if they have done gigantic disaster episodes in the past, with nail-biting season-enders, they’ve always made the cliffhangers count for something, making them series-defining turns and not simply gimmicks. For example, when the plane crashed, it led to the survivors taking the hospital to court and eventually becoming the owners of the hospital and renaming it to Grey+Sloan Memorial. When Alex beat up Andrew, it sparked off his entire character arc for the following season. So with Grey, Webber and Karev being fired in last season’s finale, I had a feeling that it would be a cliffhanger that wouldn’t just be resolved minutes into the new season (like the others unfortunately were in this season 16 opener). And it was good to see something come out of it that will inform the storylines going forward. We all know that they will eventually resume their responsibilities at Grey+Sloan, but I look forward to seeing how that happens. Let it inform the characters and their relationships, as it already is happening with Richard and Catherine, with Richard and Alex now working at Pacific North General Hospital. Let it show us sides to them as doctors outside of Grey+Sloan. Let this resolution take its time. There can be so much that comes out of it.

I hope this season does justice to the choices made for these characters. I hope we get to see sides of these relationships that make them feel real before things are shaken up too soon. I hope to see more of the promising new series regulars—Koracick, Link and Schmidt. Here’s to GREY’S ANATOMY's sweet 16!
on Saturday, September 28, 2019