EMMYS 2018 PREDICTIONS: WILL GAME OF THRONES DETHRONE THE HANDMAID’S TALE?

Let’s just get right into it

[On September 8 and 9, at the Creative Arts Emmys—the preliminary event of the 70th Primetime Emmy Awards—the results of several technical categories were announced, while Emmys for winning guest performances, and television movie were handed out as well. These have been updated below in blue.] 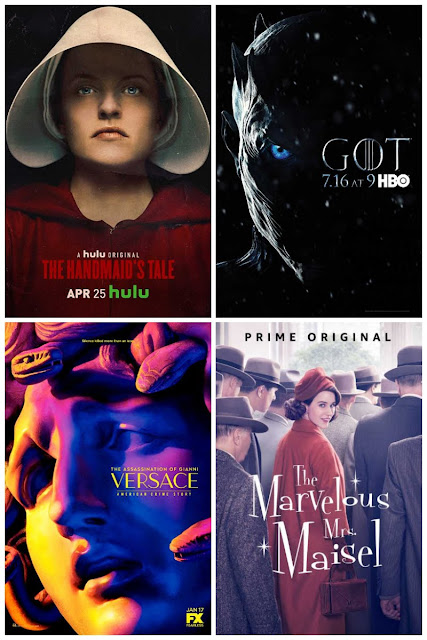 This is when we’ll find out whether the HANDMAID was actually regarded as highly by the Academy as many of us did, or if its chances to win just skyrocketed in the absence of the THRONES. I really think that this should go to THE AMERICANS by the way, for a stellar final season and a phenomenal series finale. Maybe even THE CROWN deserves this. However, I think the HANDMAID will be under our eye again!

This is a tough one. I hope someone sees that Claire Foy should win this at least once for THE CROWN, now that she’s not going to be our Lillibet anymore. But this will be a split vote—given the other strong candidates, Russell, Oh, and Wood—so Foy will lose out, and Elisabeth Moss will win again.
Outstanding Drama Actor
Sterling K. Brown, THIS IS US
Jason Bateman, OZARK
Ed Harris, WESTWORLD
Matthew Rhys, THE AMERICANS
Jeffrey Wright WESTWORLD
Milo Ventimiglia, THIS IS US

This category is hard to predict. Despite Sterling K. Brown's win last year, there's no clear winner. First off, I don’t think the WESTWORLD guys were all that—especially not for this win. Secondly, I don’t think Brown should get a second Emmy for this role. What I really hope is for Matthew Rhys to finally win for his brilliant portrayal of the conflicted Philip Jennings on THE AMERICANS, especially towards the end. Though I have a feeling Ed Harris will win. Jeffrey Wright better not. His scenes on WESTWORLD are always the most boring and tedious to watch,
Outstanding Comedy Actress
Tracee Ellis Ross, BLACK-ISH
Rachel Brosnahan, THE MARVELOUS MRS. MAISEL
Allison Janney, MOM
Lily Tomlin, GRACE AND FRANKIE
Pamela Adlon BETTER THINGS
Issa Rae, INSECURE

I doubt Donald Glover will repeat a win here. I hope William Macy finally wins. But I think it’ll go to Bill Hader.

If they don’t give this to Yvonne Strahovski, I’ll be very disappointed. Strahovski took the most interesting character development of the season and ran with it, making Serena-Joy Waterford such a layered and heartbreaking character. Thandie Newton could come close, but I’ll go with Strahovski.
Outstanding Supporting Actor in a Drama
Nikolaj Coster-Waldau, GAME OF THRONES
Peter Dinklage, GAME OF THRONES
Mandy Patinkin, HOMELAND
David Harbour, STRANGER THINGS
Matt Smith, THE CROWN
Joseph Fiennes, THE HANDMAID’S TALE

Last year, this was Alexis Bledel’s for HANDMAID, and this year it’ll be Samira Wiley’s. She was really good, and even though Viola Davis stands a slight chance of winning, Wiley will take it home.

I think this should be Goode, but I think they’ll give it to Ron Cephas Jones. Gerald McRaney won last year, and even though they don’t usually repeat winners in this category, they can still continue to show their love for THIS IS US. Besides, everyone seems to love his turn as the tragic William Hill.
Outstanding Guest Actress in a Comedy
Wanda Sykes, BLACK-ISH
Tina Fey, SATURDAY NIGHT LIVE
Tiffany Haddish, SATURDAY NIGHT LIVE [winner, Creative Arts Emmys, Sep 8-9]
Jane Lynch, THE MARVELOUS MRS. MAISEL
Molly Shannon, WILL & GRACE
Maya Rudolph, THE GOOD PLACE

And this one’s even worse. For what it’s worth, I think Sterling K. Brown should win.
Outstanding Limited Series
GENIUS: PICASSO
GODLESS
PATRICK MELROSE
THE ALIENIST
THE ASSASSINATION OF GIANNI VERSACE: AMERICAN CRIME STORY

I think this season (fall 2018) belongs to VERSACE. Even though this season of AMERICAN CRIME STORY was quite underwhelming, especially in comparison with PEOPLE V OJ SIMPSON, it has still gained momentum among critics, and I think that will go all the way to Emmy gold. PATRICK MELROSE could come close, but even that has lacked the chatter that sure-shot winners like VERSACE generally get.
Outstanding Television Movie
FAHRENHEIT 451
FLINT
PATERNO
THE TALE
BLACK MIRROR ‘USS Callister’ [WINNER, Creative Arts Emmys, Sep 8-9]

BLACK MIRROR will repeat its win this year. ‘USS Callister’ was quite something, with its genre-fluid theme, even as it captured the essence of the MIRROR stories, and drove the point home with impact.
Outstanding Lead Actress in a Limited Series or Movie
Sarah Paulson, AMERICAN HORROR STORY: CULT
Edie Falco, LAW & ORDER TRUE CRIME: THE MENENDEZ MURDERS
Jessica Biel, THE SINNER
Regina King, SEVEN SECONDS
Laura Dern, THE TALE
Michelle Dockery, GODLESS

I haven’t seen any of these, and there isn’t any sure-shot winner this time, unlike last year’s BIG LITTLE LIES. I’m going to go ahead and pick Laura Dern for this one. A close second would be Sarah Paulson. Both of them are awards-favorites.
Outstanding Lead Actor in a Limited Series or Movie
Antonio Banderas, GENIUS: PICASSO
John Legend, JESUS CHRIST SUPERSTAR LIVE IN CONCERT
Benedict Cumberbatch, PATRICK MELROSE
Darren Criss, THE ASSASSINATION OF GIANNI VERSACE: AMERICAN CRIME STORY
Jeff Daniels, THE LOOMING TOWER
Jesse Plemons, BLACK MIRROR: ‘USS Callister’

Even this will go to VERSACE. I suspect it’ll be Ricky Martin. He sure made a mark even with limited screen time.
Outstanding Writing For A Drama Series
GAME OF THRONES “The Dragon And The Wolf”
KILLING EVE “Nice Face”
STRANGER THINGS “Chapter Nine: The Gate”
THE AMERICANS “Start”
THE CROWN “Mystery Man”
THE HANDMAID’S TALE “June”

Oh, I hope THE AMERICANS wins this. That series finale was just as perfect as a finale for a show like this could ever be. It did away with the obvious, and stayed true to the fantastic character drama it has been for the last six years. However, that might be wishful thinking. Now that THRONES is back in the game, it’ll probably win.
Outstanding Directing For a Drama Series
GAME OF THRONES “Beyond The Wall”
GAME OF THRONES “The Dragon And The Wolf”
OZARK “The Toll”
OZARK “Tonight We Improvise”
STRANGER THINGS “Chapter Nine: The Gate”
THE CROWN “Paterfamilias”
THE HANDMAID’S TALE “After”

I think this should be the HANDMAID’S Emmy, but I suspect THRONES will conquer this one as well.
Outstanding Writing for a Comedy Series
ATLANTA “Barbershop”
ATLANTA “Alligator Man”
BARRY “Chapter One: Make Your Mark”
BARRY “Chapter Seven: Loud, Fast and Keep Going”
SILICON VALLEY “Fifty-One Percent”
THE MARVELOUS MRS. MAISEL “Pilot”

I hope it’s not VERSACE; they don’t deserve this one for sure. I do believe it’ll be BLACK MIRROR. ‘USS Callister’ did wonders with the character translations from the real world to the virtual.
Outstanding Directing For A Limited Series, Movie or Dramatic Special
GODLESS
JESUS CHRIST SUPERSTAR LIVE IN CONCERT
PATERNO
PATRICK MELROSE
THE ASSASSINATION OF GIANNI VERSACE: AMERICAN CRIME STORY
THE LOOMING TOWER
TWIN PEAKS

It looks like I’m predicting a VERSACE sweep. It could be a showstopper!
on Sunday, September 09, 2018