Sometimes I think that the whole #OscarsSoWhite movement might have actually done a disservice to rewarding true excellence in filmmaking. When the movement rolled out two years ago, there was an overwhelming number of people of color among the nominees the next year. If I was one of them, I would just enjoy the recognition without questioning it of course, as any of them should. However, at some level I would wonder if it was recognition that was given only because of my skin color, taking someone else’s place in the list, which would’ve been just too white with that person still on it. I don’t know if that’s necessarily a good thing. Just to be clear, I don't think Viola Davis' win for Fences last year would even come close to those nominated performances that would or should be questioned.

Of course, that being said, it’s never a bad idea to keep adding diversity to the members of the academy, whose opinions lead the above mentioned recognition that filmmakers, performers, writers, musicians, artists and technicians get.

While on true merit and quality, I've been wondering lately why films and performances can't just be rewarded for their excellence, and for that not to be impacted by the real socio-political scenario. While appreciation is warranted for films that are socially and politically relevant, I still believe that their social relevance shouldn't minimize or take away from movies that may not be as relevant, but are more superior works of cinema. In theory, films should be judged and voted for based on how they are, and not for how they fit into society. Yet, that doesn't happen in practice. But, that's a debate for another time. 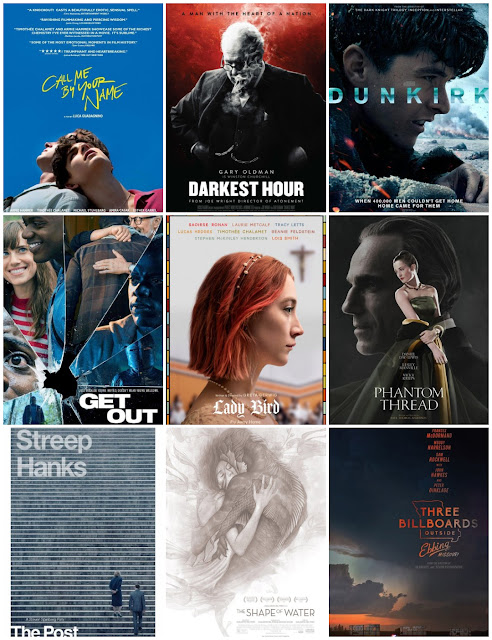 Coming to this year’s nominees, I have to say that the movies contending for best picture haven’t been all that impressive in my opinion. Despite the strong themes that some of them have, and despite how good they are, only about three or four really are of a ‘best picture’ standard I feel. I think this is a year when they could’ve stuck to five best picture nominees. Anyway...let's get on with it.

Should win: The Post – Yes, I’m going complete left-of-center with this one, but am I really? If you think about it, it’s a political drama, it tackles conflicts related to freedom for speech, it’s relevant as it depicts a war between the free press and a bullying administration, and it shows how a woman in power is made to feel. If all of that isn’t relevant today, then what is! The Post was the complete package for me, as Spielberg, Streep and Hanks did wonders with it. And it was exciting to watch, right till the very last frame, which left me with goosebumps.

Will win: Three Billboards Outside Ebbing, Missouri, since it’s topically relevant more than anything. To me, it was a very good film, but not ‘best picture’ material. But the whole film community is all about the #MeToo and Time’s Up movement right now, and that has dominated the entire awards season, so I definitely think we’ll see that in the best picture win as well. Besides, it’s even won most of the other major equivalent awards already.

Should win: Christopher Nolan for Dunkirk…Not just for the scale and magnitude of his task while directing, but because of the restraint he showed in executing the action sequences, Nolan deserves to win. It could have easily been an over-the-top, indulgent war film, but he controlled it with dignity, yet making us feel the tension and keeping us on the edge of our seats.

Will win: Guillermo Del Toro did a fine job with The Shape Of Water, and he will deserve this win, regardless.

Should win: Frances McDormand was outstanding as the crass woman who would do anything from kicking school kids in their groins to burning down a police station to make her point. And she deserves to win.

Will win: Frances McDormand’s powerful turn as Mildred will earn her her second Oscar.

Will win: Gary Oldman, of course! Besides being fantastic, he has little competition this year. No one’s strong enough. In my opinion, Chalamet’s the closest, but still at least a mile away.

Should win: Allison Janney—she nailed the part of the mom who pushed her kid and did what it took to make her daughter succeed. It was like seeing her as Bonnie Plunket—her two-time Emmy-winning role in MOM—but a darker, more intense version.

Will win: Allison Janney will become an Oscar winner this year.

Should win: Richard Jenkins—he showed restraint in portraying the pain and loneliness of a homosexual man in the 1960s, bringing to life a silent, yet impactful sub-plot in the movie, hence lending it nuance and breathing space.

Will win: Sam Rockwell—the popular favorite—has won almost every other major award for this, and will most likely walk away with his first Oscar too.

Should win: Molly’s Game…I was split between Call Me and Molly; however, Molly won for me. It was engaging, even for someone like me who knows nothing about poker. And it played out a non-linear narrative with perfection.

Will win: Call Me By Your Name was beautiful, poignant, and it deals with everything the liberal media and film community loves. The academy’s probably still trying to redeem itself from what everyone considers one of their biggest blunders—awarding Crash over Brokeback Mountain in 2006. They did redeem themselves a little by giving the movie with a gay theme, Moonlight, best picture last year over La La Land. This year, since Call Me isn’t going to win picture, it’ll at least win for screenplay.

Should win: Lady Bird, for the simplicity in its narrative…Despite that, it got us to see the complexities of the titular character and her complicated relationships, especially her equation with her mother.

Will win: Get Out is going to win this as its only Oscar for the night, but it will win at least this. It is socially relevant and has to get some recognition.

This one is going to Coco, hands down. It’s the popular favorite and the Academy rarely ever surprises us in this category.

This will be the only one Blade Runner 2049 will win on Sunday.

The Shape Of Water and Three Billboards may as well have not been in this category. It’s between the other three. Twirls, axel jumps and intercutting depth shots might make this I, Tonya’s. Or pace, chase and rapid action could make this Baby Driver’s, but I think the Academy will award the same aspects of Dunkirk’s film editing instead. This will be among the few technical awards it’ll win as consolation for not winning for direction or best picture.

Gunshots, explosions, flying aircraft, ocean sounds, screams and splashes, and everything else, sound wise, made Dunkirk such an exciting ride. This one belongs to King and Gibson.

This one could go to Baby Driver, because of the impactful audio mixing of music and effects, but I suspect this will be one of those years when both the sound awards go to the same film.

There’s no doubt that The Shape Of Water deserves this one. Alexandre Desplat scored it so beautifully. It was haunting, serene, and more anything, distinctive. It aptly represented the mystery of the creature which later turns into affection and passion. It’s one of the best scores I’ve heard in years.

I think this should go to ‘The mystery of love’, but the Academy hasn’t awarded such light, reflective melodies in the recent past (remember ‘Lost stars’ from Begin Again?). Up next should be the uplifting ‘This is me’, which won the Golden Globe, but I suspect they’ll go all popular, and give it to the song from Coco.

To me it would be between Victoria and Abdul—for recreating Queen Victoria’s signature style—and Phantom Thread—for its masterful and sublime take on high-fashion and couture of 1950s London. I think it’ll be the latter.

Darkest Hour, without a doubt! They made Gary Oldman look nothing like himself, and incredibly close to the real late Sir Winston Churchill, and the Academy loves when people are made to look like other real-life people with prosthetics. Not too long ago, the Academy awarded a similar makeover of a performer to look like another iconic British prime minister—Meryl Streep as Prime Minister Margaret Thatcher in The Iron Lady (2011)

This one is going to The Shape Of Water, for its impeccable creation of not just the research facility, but even the apartments, corridors, and the setup for the climax.

None of the ‘Planet of the Apes’ movies have won this before, but there seems to be an overwhelming majority in its favor, so let’s go with it.
DOCUMENTARY, SHORT, AND FOREIGN-LANGUAGE AWARDS

And for the rest of the categories, these are just guesses, since I haven’t seen any of the below films nominated.