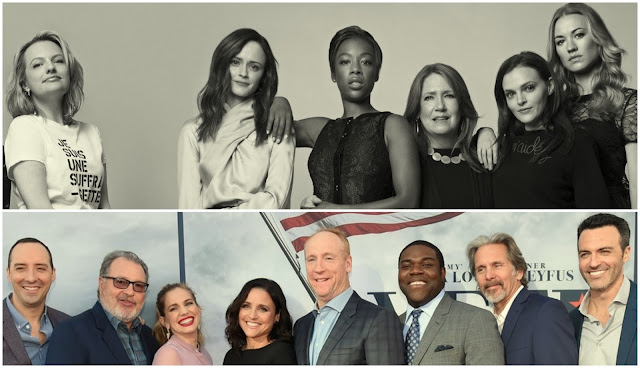 GOLDEN GLOBE AWARDS 2018 – ALL ABOUT THE WOMEN (IN BLACK)

The 75th Golden Globe Awards was far from a jubilee celebration. It was, in fact, quite low-key compared with previous editions of the show. Yes, it was fun and exciting, as ‘Hollywood’s biggest party’ often is, with table seating and booze flowing freely. However, from the word go, it was clear that they weren’t going to try and top the big musical opening of last year’s awards. Of course, it must’ve made a difference that there wasn’t any ‘Cinemascope’-worthy source material like last year’s La La Land. But none of that goes to say that host Seth Meyers was inadequate as emcee. He was in fact quite funny, and he did play well with the unfortunate source material he did have.

FOR THE WOMEN
The abuse in Hollywood informed Meyers’ turn as host, and he didn’t hold back when it came to calling people out on their disgusting behaviour. He even went so far as to say that in 20 years, when we see Harvey Weinstein in the ‘in memoriam’ section, he’ll end up being the first departed Hollywood personality to be booed. And people reacted. It was dark, but it was funny, and true, and Weinstein deserved every bit of being made into a nasty joke.

But everyone was aware that what’s been going on in Hollywood has been far worse than a nasty joke. And that’s why most of the attendees showed up in black, in support of the ‘Time’s up’ movement for the women. The support was overwhelming. While it’s good to see the most fashionable and timeless color in such abundance on the red carpet, it was also encouraging to see that people are not going to forget about this anytime soon. That a shift is taking place, and there will be change.

BY THE WOMEN
Meyers made digs at President Donald Trump too. He said that it had been implied that he had been somewhat responsible for Trump having run for president, by saying at some point that Trump wouldn’t be able to do it. Meyers went on, assuming that was true, and he just put it out there that Oprah wouldn’t be able to do it either. That went beyond reverse psychology when Oprah made an impassioned and powerful speech while accepting her Cecille B. DeMille award. It was deeply informed by the fact that she’s a woman, and a person of color. People would go on to call it her first campaign speech for 2020, and #Oprah2020 soon began trending. While people can speculate over whether she actually decides to run for president, and constantly hope that she does, all we can really do is wait and watch.

OF THE WOMEN
And that wasn’t the extent of it. The power of women was evident through all the big winners of the night. The best picture and series winners are all about women.

Best series – drama: THE HANDMAID’S TALE, a dark satire, portraying the disturbing and extreme disenfranchisement of women
Best series – comedy: THE MARVELOUS MRS. MAISEL, a story about a woman in the 50s who defies norms to do what makes her happy
Best limited series: BIG LITTLE LIES, about a group of women in a small town linked to each other by a secret that was a result of tragic abuse
Best motion picture – drama: Three Billboards Outside Ebbing, Missouri, a story of a woman who holds local authorities accountable for not doing their job of solving her daughter’s murder
Best motion picture – musical or comedy: Lady Bird, a coming-of-age story of a teenage girl in Sacramento, California

Not only are all of these stories of women, there are some very strong and very relevant themes among them too.

If last year was all about proving that Hollywood isn’t ‘so white’, this year is certainly about proving that time is indeed up. It’s safe to say that this very necessary conversation will color the rest of this awards season as well, much like it did the Globes red carpet.

ALL THE WINNERS
Best Television Series, Drama
THE HANDMAID’S TALE
THIS IS US
THE CROWN
GAME OF THRONES
STRANGER THINGS

Best Motion Picture, Drama
Dunkirk
The Post
The Shape of Water
Call Me by Your Name
Three Billboards Outside Ebbing, Missouri

Best Motion Picture, Musical or Comedy
The Disaster Artist
Get Out
The Greatest Showman
I, Tonya
Lady Bird