THE FIVE BEST MOMENTS AT THE EMMYS 2017

1. When things got political
As has been the case with any major Hollywood event lately, things got political at the Emmys this year. It wasn’t a big surprise when Stephen Colbert spoke of President Donald Trump in his opening monologue itself. He brought up the fact that Trump has never won an Emmy, even though he was nominated for several, back when he was a reality show host. Colbert even went on to scold the Academy members, a lot of whom were in the audience, saying that if they had given Trump an Emmy, he maybe wouldn’t have thought of running for president. His rant eventually ended with the declaration that unlike the US presidency, Emmys usually go to those who actually win the popular vote.
When Julia Louis-Dreyfus went up to accept her sixth Emmy for VEEP, she mentioned that they dropped the idea of doing an impeachment storyline, concerned that someone else would beat them to it. It clearly indicated hopefulness towards the impeachment of the actual president.
However, the strongest lashing-out at the president was by Dolly Parton, and GRACE AND FRANKIE stars, Lily Tomlin and Jane Fonda, the trio who presented together, as a reunion of their 1980 film, 9 To 5. Fonda stated, “Back in 1980, in that movie, we refused to be controlled by a sexist, egotistical, lying, hypocritical bigot.” And then Tomlin added, “And in 2017, we still refuse to be controlled by a sexist, egotistical, lying, hypocritical bigot.” 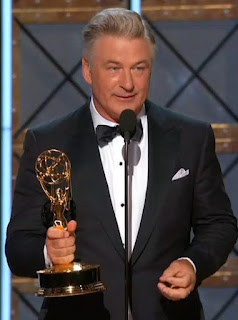 2. When Alec Baldwin put the importance of film and television in fresh and true perspective
When accepting his Emmy for supporting actor in a comedy series, for SNL, he said, “…I always remember what someone told me, that is when you die, you don't remember a bill that Congress passed or a decision the Supreme Court made or an address made by the president. You remember a song. You remember a line from a movie. You remember a play. You remember a book, a painting, a poem. What we do is important. And for all of you out there in motion pictures and television, don't stop doing what you’re doing. The audience is counting on you.” 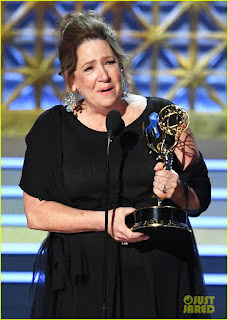 3. When Ann Dowd reacted to her surprising win for THE HANDMAID’S TALE
It was the most surprising win of the evening—probably the only one in a largely predictable Emmys night—but it wasn’t undeserving. Ann Dowd delivered a scary, yet moving and conflicted performance as Aunt Lydia, the ‘mother superior’ to the handmaids. She was probably more surprised than anyone by the announcement, having never won an Emmy before, throughout her three-decade-long career. Her speech was heartfelt, tearful, and touching. “I have been acting for a long time and that this should happen now, I don't have the words. So I thank you," she said. It made me feel really happy for her, and for it, she deserved that Emmy even more. 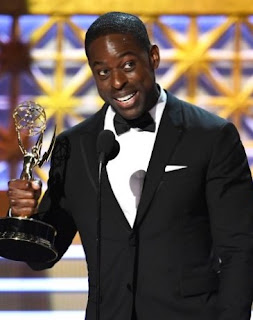 4. When Sterling K. Brown said he was honored to win in the lead actor category
His speech had to be cut short, and he was played off, while the microphone was muted. He protested, it got awkward, but the crowd gave him a huge cheer anyway. But before that, he said that prior to any of the awards stuff, he was a fan of his fellow nominees. He went on to express how huge it was for him to have won what ‘Walter White’ and ‘Dick Whitman’ had won, referring to greats like Bryan Cranston and Jon Hamm, who won Emmys in the same category for their roles in BREAKING BAD and MAD MEN, respectively. After looking up to two of the most iconic, game-changing series of our times, he went back 19 years when ‘Detective Frank Pembleton’ won in this category, noting that it’s been 19 years since an African American won an Emmy outstanding lead actor. It was Andre Braugher in 1998, for his role as ‘Detective Frank Pembleton’ in HOMICIDE: LIFE ON THE STREETS. Brown added that he was honored to follow in Braugher’s footsteps.

5. When women emerged as the biggest winners
All three outstanding series—VEEP, BIG LITTLE LIES, and THE HANDMAID’S TALE—turned out to be those with women as their hardcore protagonists. And lead actresses from all three series won as well. It was refreshing to see female-led shows dominating the overall awards for a change.
Reese Witherspoon, as a producer of BIG LITTLE LIES, while accepting the Emmy for outstanding limited series, expressed it well. "It’s been an incredible year for women in television, can I just say? Bringing women to the front of their own stories and making them the hero of their own stories, and thank you for that opportunity and for audiences to wrap their arms around us,” she stated. To that, Nicole Kidman, also a producer (and winner, lead actress limited series/TV movie) added, “And this is a friendship that then created opportunities. It created opportunities out of a frustration because we weren’t getting offered great roles.” With that honesty, she concluded, saying, “So, now, more great roles for women, please. Thank you.”
Elisabeth Moss, on winning for THE HANDMAID’S TALE, thanked Margaret Atwood, the author of the book that the series is based on, and she also thanked another woman who inspires her—her mother. Looking at her mother, she said, “You are brave, and strong, and smart, and you’ve taught me that you can be kind, and a fucking badass!”

See here a complete list of winners at the 69th Emmy Awards:

Email ThisBlogThis!Share to TwitterShare to FacebookShare to Pinterest
Tags: Awards, Big Little Lies, Emmys, Emmys 2017, SNL, The Handmaid's Tale, This Is Us, Veep

EMMYS 2017 PREDICTIONS – WHO SHOULD WIN, WILL WIN

With GAME OF THRONES out of the running this year, drama series has become so unpredictable that it’s given the category a whole new meaning. Comedy will mostly remain the same, with sketch/variety unfortunately occupying comedy spots. And BIG LITTLE LIES could just sweep the mini-series/TV movie categories. Here’s who should win and who will win at the Emmys this Sunday. 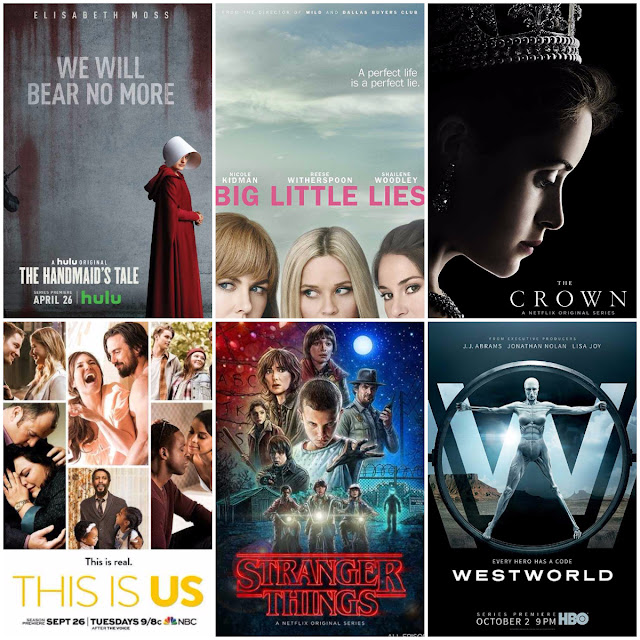 The odds of me getting this one wrong here are enormous, because there’s no clear favorite. It can literally be any of the five newcomers (THE CROWN, THE HANDMAID’S TALE, STRANGER THINGS, THIS IS US, or WESTWORLD), no one can be certain until that envelope is opened on Sunday. I think it should go to THE CROWN. THE HANDMAID’S TALE is a close second for me, and the others don’t even come close to those two, in my opinion.
THIS IS US was good, but more deserving sob-fests, such as PARENTHOOD and GREY’S ANATOMY have been ignored over the years, so I don’t see the reason for the brouhaha over THIS. STRANGER THINGS and WESTWORLD were also good, but not exceptional. THE HANDMAID’S TALE, on the other hand, was thrilling, nuanced, deep, and terrifying, because of the real world slowly becoming victim to extremist ideologies. I think the Academy will see that.

Outstanding Lead Actress in a Drama Series
Viola Davis, HOW TO GET AWAY WITH MURDER
Claire Foy, THE CROWN
Elisabeth Moss, THE HANDMAID’S TALE [Should Win, Will Win]
Keri Russell, THE AMERICANS
Evan Rachel Wood, WESTWORLD
Robin Wright, HOUSE OF CARDS

Claire Foy could win, but I really think this is Elisabeth Moss’ year. She was truly outstanding as Offred, and I think most others see it that way too.

Everyone’s going gaga over Sterling K. Brown’s performance, and while I think it was good, it wasn’t better than Odenkirk’s or Spacey’s or Rhys’. Matthew Rhys is the underdog here. He should win, but unfortunately he won’t.

The upset here could be Chrissy Metz, but I didn’t find her performance outstanding enough for her to even make it to this list. Thandie Newton, on the other hand, delivered better than anyone else on WESTWORLD, and was the strongest in the ensemble cast. She should be recognized for that.

All the other performances in this list pale in comparison to Lithgow’s. This one is his for sure. I’ll be disappointed if there’s an upset here.

VEEP’s winning streak should not continue. The sixth season was a hopeless disappointment after five brilliant seasons. However, I have a feeling that it will still win again. The streak will continue.

I really wish either GRACE or FRANKIE would win. It's such an underrated show. While Tracy Ellis Ross could win and upset things here, I think Louis-Dreyfus will be taking home her eighth acting Emmy for VEEP.

Let’s be honest. Tambor has won twice already, and his performance hasn’t been so exceptional that he should win it a third time. Macy is underrated as the detestable Frank Gallagher. He should finally win. But this year, this Emmy belongs to Donald Glover, who took the Golden Globe home as well for ATLANTA. If he doesn't win, I'm quite sure #EmmysSoWhite will trend.

Give sketch/variety its own acting categories already! These are just three spots stolen from single/multi-cam fiction comedies. Anyway, McKinnon seems to be the favorite, so there. I personally think Judith Light should get some recognition for her excellent work on TRANSPARENT. Tambor’s not the only good performer on the show!

Again, give sketch/variety its own acting categories already! Baldwin’s Trump will win this one for him. Tony Hale has been exceptional in VEEP, and he should win again.

I would give this to BIG LITTLE LIES, hands down, and I think it will actually win, even though THE NIGHT OF could be the upset here.

I’ll be honest, I haven’t seen any of these, besides SHERLOCK, which was so bad that I was shocked that it even made it to this list. If I had to guess, given how much of a talking point it became, I’d say BLACK MIRROR.

This is probably the toughest category for me, because I think it’s tight between Sarandon, Lange, Kidman and Witherspoon, but I do think that Nicole Kidman’s performance did have an added edge, among the others. She is taking this home.

If this goes to Cumberbatch for that terrible season of SHERLOCK, I’ll throw things. McGregor should get this, because even though the third season of FARGO fell below expectations, he was quite impressive. However, Riz Ahmed has had what many are calling a ‘career-defining role’ in THE NIGHT OF, and I thing ke will be awarded for it.

I thought Shailene Woodley might just creep into the lead actress race, even though she couldn’t win over Nicole Kidman, in case the Academy were feeling generous enough towards BIG LITTLE LIES. It turns out that they were feeling generous, but with Woodley in supporting. This one should go to her for showing amazing restraint as the victimized woman trying her best to raise her son, while dealing with shadows of her past. However, this will go to awards favorite, Laura Dern instead.


I’ve only seen BIG LITTLE LIES, FARGO and FEUD, but I can still say that Alexander Skarsgård deserves this one, and I can safely say that he will win. He was terrifyingly convincing as Celeste’s abusive husband. It almost had me wondering if Skarsgård himself is potentially abusive.