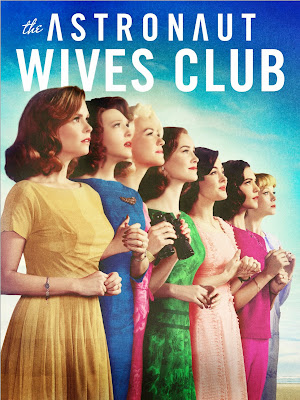 “Based on the book by Lily Koppel, this 10 episode series tells the story of the women who were key players behind some of the biggest events in American history. As America's astronauts were launched on death-defying missions, Life magazine documented the astronauts' families, capturing the behind-the-scenes lives of their young wives. Overnight, these women were transformed from military spouses into American royalty. As their celebrity rose and tragedy began to touch their lives, they rallied together.”

ABC’s overview of what the series is about captures what’s on the surface of the series. As the beginning of the series takes us into the space race of the 1960s, we soon discover that there was a lot at stake for the nations that wanted to take the first step towards exploring what was truly out of the world.

As Life magazine begins to chronicle the events of the missions to space, the approach they take is to focus on the wives of the elite group of seven astronauts who are selected to make their way out in successive trips. While Russia beat America to it by sending the first man to space—Yuri Gagarin—America’s aggressive approach to orbit the Earth, to make more significant advancements in the field, soon puts a lot of pressure on the astronauts and their wives. The series captures all of the above quite perfectly. It’s a time when public opinion and support is paramount, as making favorable appearances puts a lot of pressure on the wives, who aren’t always prepared for it. As the stories of the wives shed light on the conflicts they face, coping with the anxiety, yet trying to live up to the pressure of painting a positive picture of hope.

Expectations of being the perfect partners aren’t always easy to fulfil, as we begin to discover the intricacies of the marriages of these new celebrities in America. Details about their pasts are woven into the plot with the appropriate subtlety, as the series unravels characters for us to see as complete human beings, with their dreams and ambitions as well as fears and insecurities.

THE ASTRONAUT WIVES CLUB does justice to almost every character in what is quite a large cast, in a short span of time. The story is paced well, and still manages to effectively capture the endearing and lighter moments between the friends, showing the significance of their bonds, which really is what’s at the heart of the series. As these women try to stick together and be there for each other, knowing that only they can truly understand each other, the men try and do the same, as they anticipate when their turns will come and how they will fare.

A show full of lovely portrayals of relationships, THE ASTRONAUT WIVES CLUB it set against a backdrop of ’60s. It was a socio-economic time that was not only about advancements such as man taking a step outside the atmosphere, but also a time that was seeing a tremendous amount of change. While the race divide was still far more prominent than it is today, women were growing to realize that they could have a voice if they wanted to, and they could also dream big like their husbands did. And THE ASTRONAUT WIVES CLUB shows us how its characters navigate these tricky waters quite well. I look forward to seeing more of this promising series, an offering that’s rather different from most of what we have on TV these days.