'MAD MEN': THE FORECAST OF ALL THAT'S LEFT 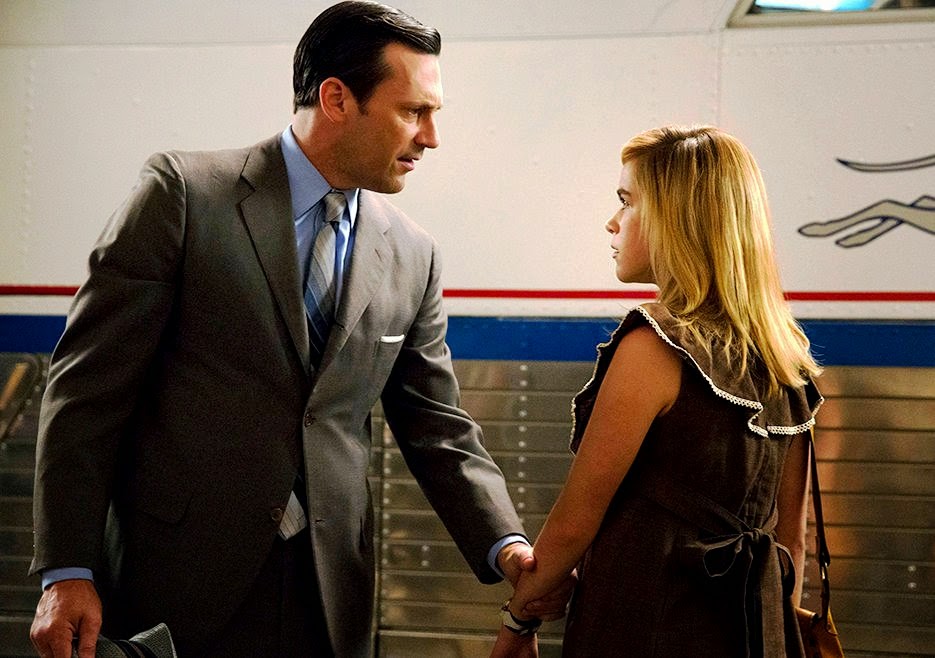 There’s been a lot of talk lately about how MAD MEN’s final season doesn’t seem to be going anywhere, or that the writers don’t even know where it could go. People have expressed sheer frustration over the fact that there are still many new faces on the show, in each episode, taking up too much screen time, which, let’s face it, all us fans would want to be spent on the established characters. I somewhat agree. I do think that the second part of the final season has already given us some golden moments of the brilliantly-written Peggy-Don relationship, the hilarious anger of Pete Campbell, the masked insecurities of Joan Harris, and the coming-of-age of Sally Draper. But I get greedy. I want more of Roger Sterling, more of Ted Chough, more of Pete Campbell, more of Megan and Betty, and everyone else.

The truth is that MAD MEN has never been an indulgent show. There’s always been strong control over how much of a character is exposed to us at a time. There have always been supporting and guest characters who may have only served to uncover the emotions of our main characters, but their presence has always been crucial to the narrative, to the glimpses of the characters’ lives that we see in every episode, and to them being realized almost as though they’re real people. And why should the final episodes be any different? MAD MEN has never been a show about big moments in season finales and premieres. Marriages have begun and ended from one season to another, without us having seen even a glimpse of a wedding. And the turn of the decade has been introduced to us without a hint of a fuss about it. The biggest changes are seen subtly and beautifully, without unrealistic dramatization or melodramatic break-downs. And that’s the beauty of the show. In fact, if it wasn’t for the developments in last Sunday’s episode, I might have thought that the entire thing would end without so much of an acknowledgement of the fact that we would never be seeing these characters again.

I speak of the most recent episode because despite the fact that the show has always shown great restraint with exposition, episode 10 (‘The Forecast’) of season 7 has probably been the most indulgent one yet. And that’s true especially for Don Draper. We’ve seen him telling off people before, we’ve seen him being proud and arrogant before, we’ve seen him being charming and flirtatious before. We know him well enough to know that what we saw of him in ‘The Forecast’ wasn’t uncharacteristic of him. However, there were moments in the episode that showed him as not holding back, not keeping the entirety of his feelings to himself. His endeavor to write the speech, which Roger Sterling asks of him, sends him into examining his own life from that point forward… What he wants from it now, and what more there was to accomplish or what he hasn't been able to accomplish yet, after becoming rich from SC&P becoming a subsidiary of McCann-Erickson, and also after his second marriage has failed.

When Mathis says “…You always had to be at the [Lucky Strike] meetings so [Lee Garner Jr.] could think of jacking you off,” Don holds back, and only says, “You have a foul mouth. Take responsibility for your failure. That account was handed to you, and you made nothing of it because you have no character.” But when Mathis attacks the ease with which Don seems to go about life, Don doesn’t hold back, and says that everybody has problems, and that some people can deal with them and some people can’t. In this moment, he may have been implying that he was probably one of those who can deal with their problems, but we don’t know that for sure. We know that he’s struggling to grab on to something—which he was clearly trying to do, with that waitress in the previous two episodes. On the other hand, he forgets subtlety when he’s trying to write that speech and Peggy asks him to give her a performance review. He chuckles condescendingly at the things that she aspires to be and to have, knowing well that he’s already accomplished those things, and is searching for what he wants from life beyond all the career-related goals. Peggy says, “This is about my job; not the meaning of life,” yet he doesn’t give in, urging her to continue about the meaning of life. Finally, she says to him, “Why don’t you just write down all of your dreams, so I can shit on them.” And the sad part is that he just doesn’t know what they are anymore.

Yet, we see a side of him that we haven’t seen before. It indicates that he is, in fact, on some level, trying to right his own wrongs, without apologizing for them, and simply acknowledging that he is aware of them, and is on a path to find meaning. He continues to ‘survey’ what kind of meaning people search for from their lives, even asking Sally’s friends what they want. Sally, who we had just seen getting disgusted by her mother basking in the ‘inappropriate’ attention being given to her by Glen, is further disgusted by her father responding to her 17-year-old friend’s flirting. She declares that she wants to be nothing like either of her parents. And Don doesn’t hold back with expressing how convinced he is about knowing Sally better than she knows herself. “I’m your father, and you may not want to listen to this, but you are like your mother and me. You’re going to find that out,” he tells her. And in probably his most fatherly moment, he says to her, “You’re a beautiful girl. It’s up to you to be more than that.” Trying to make her realize that eventually, she’s going to want answers about her own life—like he’s had for a while now—we see him being more expressive than he’s ever been with her. And this moment had been a long time coming, since we saw him being caught by Sally cheating on Megan with his neighbor, in season 6. And in this moment he’s striving to bridge the growing distance between his daughter and him, probably as a part of his recently renewed quest for the meaning in his life.

And that’s really what these last few episodes are about, as I see it. The show will not end with a big event, or the achievement of absolute fulfillment for Don and the others. But I don’t think that the writers and Matthew Weiner will disregard the need for there to be some kind of an end to the journeys that these people set out on seven seasons ago. Even if they simply end with a minor glimpse of the next thing for the characters, I think that there will be a conclusion. We may want to actually see Peggy as SC&P’s creative director, or Joan finally finding lasting happiness in her personal life, and Don actually finding out what he wants, among a lot of other things, but we most probably won’t. However, I think there will be an end to the journeys in some way. That’s something I don't think we'll be denied.
on Saturday, April 25, 2015