5 REASONS WHY 'THE NEWSROOM' SERIES FINALE WAS A FITTING END

HBO's THE NEWSROOM ended its three-season-long run on Sunday last week, and many wrote it off as too sweet, or too much of a farewell party. However, here are five reasons why I felt that it was an apt end for the show. 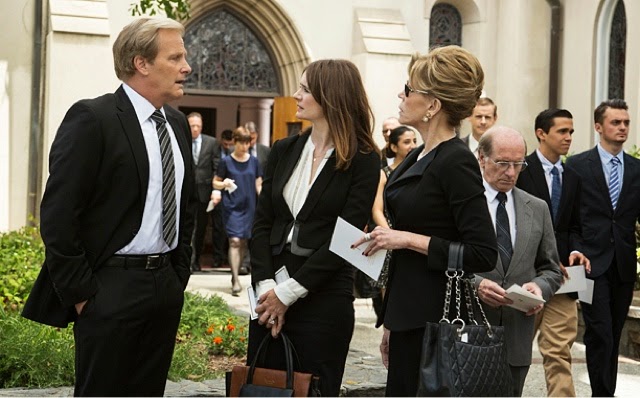 1. Charlie Skinner's death and funeral: It was a good way to push the characters into the next phase of their lives and careers, and bring them all together in doing so. I did think that it made the episode too flashback-heavy, with a longing to know more about the present. But while I would have liked more screentime of the characters getting on with their jobs and giving us a glimpse of that next phase, the backstory did inform each character's growth through the series. It brought out key moments of their journeys in clever and effective ways. It did make Skinner out to be the best guy ever and a genius for being the architect of  what News Night should be, but that wasn't way off from the Skinner we've seen for the last three seasons. The high emotional quotient was a bit indulgent, but hardly anything to have an issue with, as far as I'm concerned.


2. Leona Lansing: Season one put Charlie and Will up against Leona and Reese in massive ways that threatened at least Will's job, and over seasons two and three, that equation was brought a full circle. In the finale, as she explained to Pruit why fighting with one's news directors means that one is doing one's job. The fact that she conveyed it by expressing as articulately as possible that he was a prick was just a brilliant way of getting there. Her character was retired with class, optimism and with all the strength that she had (if not more) as the woman who was in charge.

3. The couples: It wasn't quite a crucial element of the series. Yes, Will and Mackenzie had a past, and Jim and Maggie have had a will-they-won't-they going on since the first episode, but I didn't see it as such a strong part of the show, until season three. Don and Sloan had just gotten together, and Will and Mackenzie had got engaged, But, honestly, I didn't much care for whether or not Jim and Maggie would get together; just that we all knew that they would. I was more interested in Don and Sloan, the unconventional romance, but not without the commitment or willingness to express feelings. It was a very well written, albeit short, relationship, which was written into the finale maintaining what was good about it, yet keeping with the backdrop and the tone. I was still happy for Jim and Maggie when they talked about what it meant to them to be working apart, and even when Jim implied that he loved her. I thought it wasn't a bad way to end that series-long arc. I was hoping before the finale that Will and Mackenzie wouldn't be pregnant (what a cliché!), but it wasn't as big of a deal to me.

4. The news people: There was mention of the characters wanting to do a public service of bringing the most useful versions of the news to the viewers of ACN in the episode, and it's that ethical responsibility that is the common factor between them. It's what drove them to do the right thing, taking risks to get the information out there, not compromising on their principles, being ambitious to be able to do it all, despite the differences they had in how they wanted to accomplish that. The news wasn't left behind. Despite a long-awaited union, Maggie still wanted to be a field producer in DC, even if it meant a long-distance relationship with Jim. And Neal came back with an aura and a voice that even Bree, the pompous creator of that stalker app, had to bow his head down to in shame. Don even gave up his promotion to Jim, in order to stick to his goals for ACN's 10:00pm.

5. The actual news: Telling stories of how the biggest headlines of the last four years reached our TV screens, or how they should have, was obviously the backdrop of everything else that happened on the show. And even in the finale, while there was too much of everything else happening for the news to get in on it, it wasn't completely missing. From Charlie not wanting to see weather reports or Kiefer Sutherland's interview on News Night, to the alert about Mandela going on life support; from the Pope neglecting to comment on the stories of priests molesting boys, to the slight mention of Prop 8, we did still get a slight glimpse of the newsroom. It was all nicely woven in, even though it couldn't be the focus.

And that, I think, makes it a fitting end to a good show.

Do share your views on THE NEWSROOM's series finale below.
on Thursday, December 18, 2014