JUST HOW DEVIOUS ARE THESE MAIDS?

On watching the pilot of DEVIOUS MAIDS (which is available online before the show premieres on Lifetime, Sunday, June 23), I found that the show has the elements that made DESPERATE HOUSEWIVES great, while also being rather fresh in its approach and premise. Here’s more on how devious the maids got… 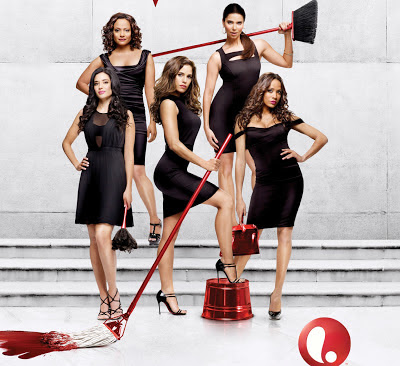 When ABC turned down DEVIOUS MAIDS, I was disappointed. I wasn’t expecting another DESPERATE HOUSEWIVES from Marc Cherry, but I was looking forward to something that would come close. And when Lifetime decided to give it a shot, it was a relief. After watching the pilot, I don’t see why ABC gave it up, because it’s actually better than some of the shows that ABC has and definitely looks better than some of the shows that ABC has picked up for fall 2013 (BETRAYAL being the best example). What I was expecting from DEVIOUS MAIDS, being a DESPERATE HOUSEWIVES fan, was the same mix of humor and suspense that DESPERATE HOUSEWIVES had, as well as a set of intriguing and likeable characters. The pilot had all of that, despite my initial (unfair) comparisons with Marc Cherry’s previous show. 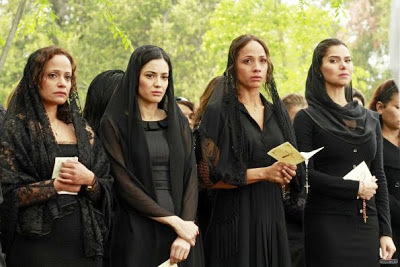 It starts out with a mysterious death at a Beverly Hills party, which aptly sets the tone for the show—rich people going about their pretentious, self-centered lives, while the help has to deal with their shallow and harsh ways. Cut to the funeral of the maid that was killed, and we’re introduced to the other maids. It wasn’t unlike how we were introduced to the housewives on DESPERATE HOUSEWIVES, around the funeral of Mary-Alice Young, and it seemed like Cherry was trying to generate the same kind of interest in the maids as he did with the housewives. However, I decided not to be judgmental yet. Then, I guess because Cherry missed having a narrator like Mary-Alice, we were introduced to each maid and their episodic story, with their names on the screen, one after another. 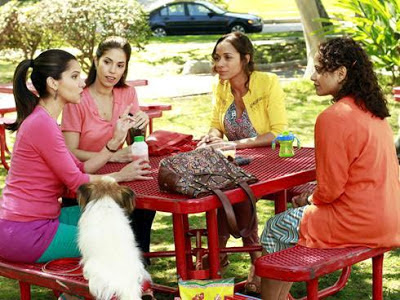 The stories didn’t seem that exciting at first, while the DH brand of humor that I wanted came very sparingly. A couple of the maids did seem intriguing, but their employers’ characters were clichés—self-centered, rich, snobbish ‘mean girls’ who dominated the men in their lives. However, things picked up quickly, and it became increasingly apparent why the show had been named DEVIOUS MAIDS. The maids, all clever women, found underhanded ways of manipulating their employers in order to get what they wanted—some more impressively than the others. Marisol, for instance, drew me in right from the beginning, when she was being interviewed by her employer, who made a comment about her not having an accent. Marisol’s reply and how she subsequently seized opportunities to ensure that she gets the job, while risking being too nosey, saying and doing things that were not her place, made me like her. Carmen’s proactive and persistent approach towards getting what she really wanted—the reason why she had taken a job at a musician’s house—was also quite impressive. Rosie, who seemed like the typical Mexican, trying to get a family member across the border, found her moment to shine later in the episode as well. Zoila’s story didn’t interest me much, but her position as the maternal figure in the friend-circle of neighborhood maids was quite apparent. On the other hand, Zoila’s daughter, Valentina failed to be among the maids that I was interested in knowing more about. 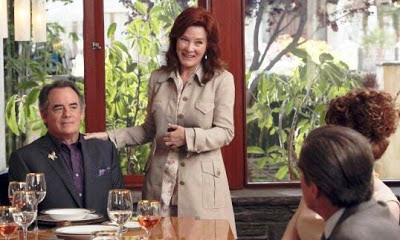 While the show does rely on certain stereotypes, especially among the employers, the protagonist-ensemble is definitely a set of mostly interesting characters. What binds the maids together is coffee in the park in their break-time, which is probably going to be the equivalent of the desperate housewives’ weekly poker game and chatting over each others’ picket fences. Also, all the employers are in the same social circle, which offers the writers opportunities to overlap the maids’ storylines making for a more engaging narrative. The show is well-cast for sure, with Rosalyn Sanchez (Carmen), Ana Oritz (Marisol), Rebecca Wisocky (Evelyn) and Melinda Hamilton Page (Odessa) turning out to be the performers that left a strong mark on the pilot. Appearances by DESPERATE HOUSEWIVES alumni like Valerie Mahaffey (Alma Hodge, DH; Olivia Rice, DM), Andrea Parker (Jane, DH; Nancy O’Dell, DM), and Melinda Page Hamilton (Sister Mary Bernard, DH) were more than welcome. After watching the pilot, I felt that the premise and the name of the show do hold the potential of giving us stories that will give us a few laughs, while involving us in the lives of the maids, as well as the mystery element. I look forward to seeing more of the maids being devious and hitting back at their employers in subtle yet effective ways.

If you have watched the pilot of DEVIOUS MAIDS, do hit the comments section below to share your views on the maids and their devious ways.
on Monday, June 17, 2013