‘BATES MOTEL’ – ‘PSYCHO’ FROM THE BEGINNING

After watching the first season of BATES MOTEL, I decided to re-watch Alfred Hitchcock’s Psycho, based on the book by Robert Bloch—the original material that became the inspiration for the Hitchcock classic and masterpiece, various sequels and remakes. Now BATES MOTEL, the prequel gives us an in-depth view of the layers beneath the exterior of Norman Bates—the world’s favorite ‘psycho’!

If there was one character, from pop-culture through the ages, that generated the kind of curiosity, which would warrant an entire television series exploring the depths of the character, it would have to be Norman Bates. And BATES MOTEL does just that. It was an ingenious idea to make a series on what made Norman Bates the Psycho that he is in Alfred Hitchcock’s classic. While some purists probably shuddered at the idea of touching the ‘masterpiece’ of cinema, BATES MOTEL is actually the best way for the creators and producers to capitalize on the phenomenon made popular by Hitchcock. And I have to say that the showrunners and writers have done a stellar job of portraying Norman Bates, the early stages of his psychological issues and his complicated and sometimes very disturbing relationship with his mother. To make it even better are excellent and compelling performances by Vera Farmiga as Norma Bates, and Freddie Highmore as Norman Bates. 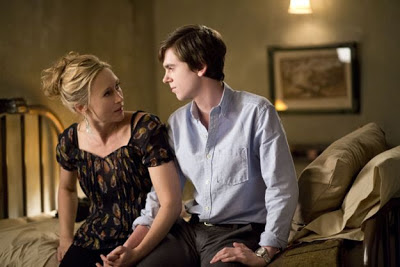 The most mysterious part of Norman Bates’s life, as seen in Psycho, was probably his mother, whom we never actually saw in the film, except for as a preserved corpse. A lot of Norman’s psychological issues, which make him the ‘psycho’ that he is in the film, arose from his relationship with his mother, which was complex and strange. He was far more than the conventional ‘mama’s boy’, rather a highly exaggerated version of that, quite disturbingly so. To begin with, BATES MOTEL gives us an imagining of that very important character, right from the basic element—her name. It was simple, but clever to name Norman’s mother Norma, which is well explained in the pilot itself, when Norma Bates says that boys are named after their fathers all the time, so it shouldn’t be seen as strange. While that’s very understandable, there’s still something very strange about it, which reflects a lot that one wouldn’t see on the surface when in front of the mother and son, but it’s something that we see in scenes that show us only Norman and Norma. The excessive physical affection, the near absence of boundaries when it comes to privacy and the protectiveness that borders on insanity are all things that we see in subtle and obvious ways, but still it’s all under the surface for the outside world. Behind closed doors, there’s only Dylan who sees this strange relationship, discourages the smothering, while the audience has a chance to see the difference between the son that Norma raised and the one that ran away. Dylan is also the one to point out Norma’s crazy behavior, her heightened emotions and her hysteria when reacting to upsetting situations. Norman, on the other hand, is far more forgiving of his mother’s extreme personality, despite having to largely bear the brunt of it himself. And whatever the situation, whether he gives in to his mother’s irrational demands and need for attention, or decides to be rebellious and go out there and be ‘normal’, he eventually comes home to give her a helping hand, offer her a shoulder to cry on, or be the only thing in her life that truly matters to her. The gradual, but steady exposition of their relationship throws a lot of light on the ‘mommy issues’ that Norman Bates develops. It also establishes very well how the mother and son only have each other—something that is later threatened, which causes Norman to take her life and partially assume her personality. 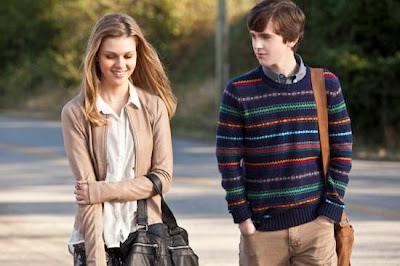 In the prequel series, Bates Motel has been moved from Fairvale, California to White Pine Bay, Oregon, which was probably a shift from the original story, in order to expand the avenues for various other storylines and characters, the introduction of which would be means for the writers to tell us Norman and Norma’s story. The most significant addition to this world is the school that Norman goes to. The story of Norman Bates as the boy who would become the ‘psycho’ offered the writers a great opportunity for teenage drama. There’s the typical story of a new kid in high school, who’s a little awkward and doesn’t quite fit in, has an unusual connection with a teacher, and becomes friends with another awkward kid. We’ve seen it all the time in movies and TV shows, but this time, the story has an intense and more intriguing appeal, because the awkward new kid is Norman Bates. His behavior with people his age, his romantic and sexual encounters, his social demeanor—all contribute to the character’s development in deep ways. 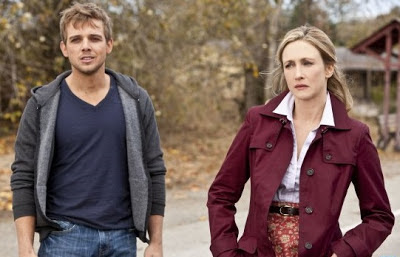 However, White Pine Bay is way more than just White Pine Bay High. Like Fairvale, it’s a small town, run by a sheriff. And in a small town, everyone knows everyone, and gossip spreads like wildfire. Also, in small towns, rich and influential people are even more influential. And that offers the writers the opportunity to tell stories of crime and underground activities, like a marijuana business and sex slave trafficking. How Norma and her family become involved with the dangerous elements of society behind these operations is quite effectively written, and is in keeping with the entire mood of the series. Mysterious happenings around Bates Motel and various occurrences that motivate the character of Norma to behave in extreme and irrational ways, contribute significantly to the development of her character. And then there’s Dylan, a character that we didn’t see or hear of in the film, but one that plays an important role in not just how we see Norman and Norma together, but also as a means to show us other sides of White Pine Bay, and take various subplots forward. He’s also an integral part of starting things up at the motel, and his complicated relationship with Norman also helps throw light on the character.

“A BOY’S BEST FRIEND IS HIS MOTHER”
While White Pine Bay is the new setting for the series, a lot of the show reflects the things that we’ve seen in the movie. Let’s start at the set. While the sets of the original Bates Motel and old Bates house still exist in Universal Studios in California, the sets for the series have been constructed in Vancouver, Canada, where the series it is filmed. However, the details in the set, from the basic design of the house to the interiors, the stairs leading to the house to the angle between the house and the motel, the motel itself to the landscape around it…everything is so well replicated that I couldn’t tell the difference (except for the placement of the motel office and bathrooms). The series also lays the foundation for various other elements of the film—some that say a lot about the character and some that help take the story forward. Taxidermy, Norman’s hobby of preserving dead creatures, is something we see in the series, when Norman decides to learn about Taxidermy from his friend’s dad. In the movie, there’s a mention of the new highway, which took the traffic and business away from Bates Motel, and in the series, the construction of a new highway becomes a cause for concern for Norma as she’s preparing to open the motel. It’s things like these, and even the show’s tagline, ‘A Boy’s Best Friend Is His Mother’ (which is in one of Norman Bates’s dialogues in Psycho) that give us exciting and fascinating reminders of the film.

[SPOILER ALERT: Read further only if you’ve watched the first season of BATES MOTEL. Plot twists and latest cliffhangers are mentioned below.]

FROM PSYCHO TO ‘BATES MOTEL’ 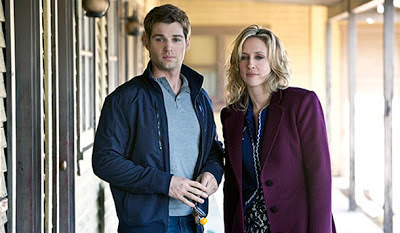 The series also has subtle references to the things mentioned in the film. The famous shower scene of the film ended with a stabbing and a dead body in the bathtub, after which there was a detailed depiction of how Norman cleans up the mess. In the pilot itself, there’s a murder by constant stabbing, after which the body is hidden in the bathtub, and we also see the cleaning up of the mess. In the film it is explained that Norman Bates killed his mother and lover, whom he was jealous of. In the series, when Norma starts dating Zach Shelby, she asks Norman if he’s jealous of him. It was a subtle and clever indication of what's to come. 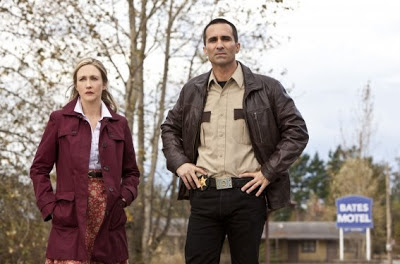 Apart from doing justice to laying the foundation of an iconic character, the first season of BATES MOTEL had some very interesting storytelling, even if one had to look at it as an isolated TV series. From the regular running of the motel to the involvement of the characters in mysterious activities to the secondary characters and relationships…it’s all quite well written. While there’s a lot of potential for storylines around the whole marijuana business, since Dylan is at the centre of it, I’m doubtful of how much they can do with that angle to involve Norma’s character in it more than she has been. Then there was Norma being threatened by ‘Jake Abernathy’. I understand the whole Romero and corrupt cop angle in that storyline, but the resolution of that conflict in the season finale didn’t make much sense to me, especially Norma’s presence in the scene of final confrontation. It was almost like the writers put her in that scene simply because they had to involve her character in some way. It’s probably going to lead to Sheriff Romero’s greater involvement in the whole crime scene in White Pine Bay, and that means more interesting storylines to look forward to, but for now, I’m still skeptical. 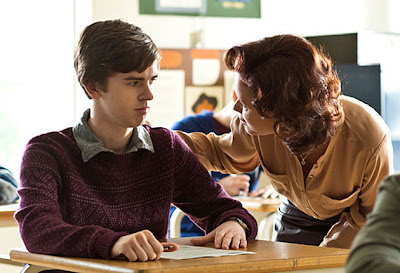 On the other hand, Norman’s character has the high school drama, in which there are always possibilities for various storylines. However, I do suspect that the writers will have to tone down the ‘psycho’ nature of the series in general for the sake of longevity. For now, the first season had a chilling end—Norman’s teacher, Ms Watson lying murdered in her bedroom, by Norman, who had no clue of having done it, just like he had no clue of having killed his father. His blackouts, and his switch from his conscious personality to a side of him that he’s unaware of, made for chilling moments throughout the first season. It also reflects what is eventually to come—Norman’s split more prominent split personality, which he will become more aware of. I look forward to seeing more of his growing ‘psycho’ behavior, and his mommy issues as he grows. The show maybe doing well for now, but I really hope that the writers get the chance to take us all the way to the part where Norman kills his mother and lover, makes it look like a murder-suicide, and then keeps her in his life by partially assuming her personality. It would be the ultimate development to have in a prequel to Psycho. If we get to see Norman Bates right up until the time when Marion Crane comes to stay the night at BATES MOTEL, then nothing like it!

What have you thought of BATES MOTEL? Are you a fan of Psycho, and still like it? Do you love it regardless of knowing Psycho? What do you think of the show in general? I'd love to read your views, so do comment below.
on Wednesday, June 05, 2013