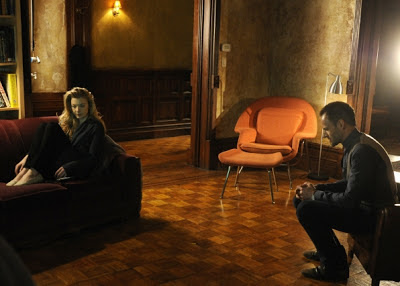 Maybe others did too, but I certainly had a strong feeling that Moriarty would turn out to be Irene Adler herself. Irene turned out to be alive, which is not how it is in the original Sherlock Holmes stories (as far as I know, and I don’t know too much about Sir Arthur Conan Doyle’s original). Secondly, there was more mystery behind the identity of this ‘Moriarty’ character than there was in BBC’s SHERLOCK. They definitely wouldn’t be able to justify the suspense if it had turned out to be someone that we hadn’t seen before or heard of as having been a significant part of Sherlock’s past. And thirdly, if they made Dr Watson a female in this version of Sherlock Holmes, what was stopping them from going a step further and making Sherlock’s nemesis also a female. Having said that, I think it was a great decision, in order to really spin things around, and give us a completely different (and very original) interpretation of the phenomenon that is Sherlock Holmes. Die-hard Sherlock fans might disagree with a passion, but I think that the writers of ELEMENTARY made the whole Moriarty mystery a lot more exciting and unpredictable (almost), than it could’ve been. What I didn’t like was how they trapped Adler/Moriarty in the end. It seemed a little too convenient for them to catch someone who had eyes and ears everywhere and was smarter than Sherlock himself, despite the fact that it made for a good twist when it turned out that Sherlock had faked his overdose. More disappointing than that was the fact that they just ended it in season one itself. Maybe not, because Adler/Moriarty could escape from prison and go back to playing mind games with Sherlock eventually, but this season finale had a sense of finality to it, leaving no loose ends that would leave us guessing. What I’ve loved throughout the season is the evolution of Sherlock and Joan as characters, handled very well by the writers, through all the subtleties and limits in exposition. Their working relationship and camaraderie especially stood out for me in the season finale, and that’s one thing I’m looking forward to seeing a lot more of, even as they go about solving regular homicides of a more procedural drama nature. 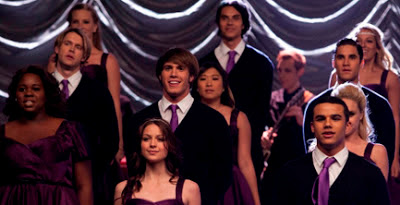 The season four finale of GLEE didn’t give us anything that was all that exciting, except for the whole Ryder’s-mystery-girl storyline coming to a heartbreaking end. I’ll admit that I didn’t guess that it was Unique, but I wasn’t convinced at all when Marley owned up to being her. I felt Ryder’s pain when he thought that it was this prank that had gone too far, but I actually felt worse for him when it turns out to be Unique and that the whole connection was very real, except that it was with someone that he couldn’t be with. That, I felt, justified his anger towards Unique. And while I think we were supposed to feel bad for Unique, I was more like, ‘Okay, you had your fun, dreamed your dreams; but it’s not like there was any future there, so move on already!’ And liked that this twist was quite consistent with how Ryder has felt about Unique in the past, being a little old-fashioned, but not out of spite, not accepting or understanding Unique’s gender-identity issues. And this whole storyline really made me realize that I’m actually quite happy with the new kids in GLEE. And while the New York and NYADA storylines started out with excitement and the novelty factor, they’re now already tired and I don’t know if I really care what Rachel does any more. On the other hand, I wanted to slap Blaine for being impulsive and stupid in wanting to propose to Kurt, despite the sage advice that Kurt’s had given him earlier. I understand that the writers want to play with storylines involving ultimate commitments like marriage, despite the fact that these kids aren’t even 20 yet, but there’s a limit. They should’ve let Kurt’s dad’s advice to Blaine remain as a lesson for him, and instead, focus on rebuilding Kurt and Blaine’s relationship. Then there was Brittany’s offer from MIT. It’s ridiculous how it happened, but then, I stopped taking this show seriously a long time ago. I will miss Brittany’s ridiculous humor if Heather Morris does leave the show for good though. And finally, Will and Emma got married. I’m glad it finally happened. That’s all I’ll say. And, while my reason for sticking with the show is only that the music and performances are entertaining, I’m still kind of glad that Fox has renewed it for not just one, but two more seasons.