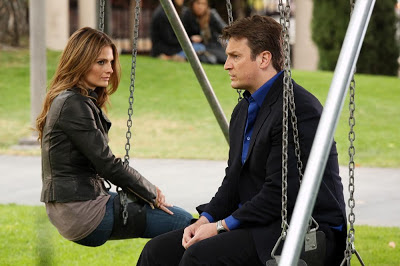 So I made an observation after watching the CASTLE season finale that BONES and CASTLE had quite similar cliffhangers. Both shows, crime procedurals, have had this building chemistry between their respective protagonist pairs. And in recent seasons, the pairs ended up as couples. And now, here we are, both the shows had proposals in the season finales. One engagement had to be terminated, and the other, well, it’s not an engagement yet. But I like that CASTLE didn’t conclude its season with the big central story of Kate bringing her mother’s killer to justice. I suppose they’re saving that for a later season, having already established that it’s a big powerful politician. It’ll probably require a lot of strategizing on Beckett’s part to bring him down. Meanwhile, there’s this big career opportunity, which is coming in the way of her relationship with Castle. I liked that they built up, towards the end of the season, the whole question of where they were going in the relationship, having completed a year of being together. However, while I understand the need to end in a cliffhanger like they did, I think that even if Beckett moves to DC, they could still manage their relationship. DC is on the east coast. Castle could travel there, and his job doesn’t require him to be at an office or anything. He could write from anywhere. But, it’s quite clear that Beckett will not move to DC, because that would kill the premise of the show. She’s going to stay and continue solving murders with Ryan, Esposito, Lanie, and even Castle, whether or not she’s in a relationship with him. Although, I do hope that they resolve this new-job-offer-and-proposal issue well in season six, so as not to make the job offer simply feel like a season-ending gimmick. Imagine this: Beckett and Castle break up, because she decides to go to DC. And by the end of the season six premiere, the job offer falls through, and she has to stay back in NYPD homicide. But, she doesn’t get back with Castle, because the rejection of the proposal leaves a gaping wound in their relationship. That would give the writers a season or two to explore the dynamic between two exes working together solving crimes. It would give them the opportunity to again play with the emotional and sexual tension between Castle and Beckett, which we saw through the first four seasons, but on a whole new level. I’d like to watch that in season six! 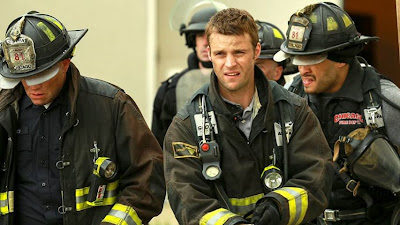 This fire department procedural ended its debut season with quite a bang, with all that went down with the smoke and blackout and lockdown and hostage situation and paramedic emergency and everything else with the one big rescue mission that the team undertakes. It was all quite well played out, and made for some good season finale material, but what caught our attention in the end, as we look forward to season two, is the turmoil that people’s lives were left in. Shay didn’t get pregnant and Renée shows up, pregnant with Severide’s baby, making Shay feel even worse, ’cause she was trying to have a baby with Severide. Mills doesn’t make Squad, but heads over for a Chicago PD application. Dawson revealed to Mills, in not so many words, that she does have feelings for Casey, but of course, Casey is a total mess, while dealing with Hallie’s death. It’s not like we should’ve expected Casey and Dawson to get together in the first season itself. I see them as the show’s ‘it’ couple, and they’re going to be on a long rollercoaster ride before they come anywhere close to being happy together. Which brings me back to Hallie...Her death made it clear that her return to Casey’s life was a good means to stop him from getting together with Dawson, as well as a good way to set the ball rolling on the spinoff! I must commend the writers at the good job they’ve done through the season, with subtly interplaying the working of the CPD with the CFD. They gave us a character, Voight, whom we hated, and then brought him back, making him turn over a new leaf, so that we get on board with him as a crucial part of the spinoff. What I liked is that Voight still maintains his relationship with the influential criminals out there, but will now use them for more constructive purposes. On the other hand Antonio Dawson is going to be a prominent part of the spinoff and, as it seems, so will Peter Mills. I think that the close connections between the characters in CHICAGO FIRE and CHICAGO PD, and the fact that they’ll both be set in the same place, offers them a lot of scope for crossovers. However, for the latter to stand on its own, I’m sure they’ll try to avoid crossovers, which will make us question why and how the characters in CHICAGO PD will suddenly get cut off completely from those in CHICAGO FIRE. More than the CHICAGO FIRE cliffhangers, I’m more interested in how the showrunners of the two shows will manages to keep the two shows apart and also keep the audience satisfied.