90210 ended with quite a simple and unexciting series finale that could have been just any other episode of the show! 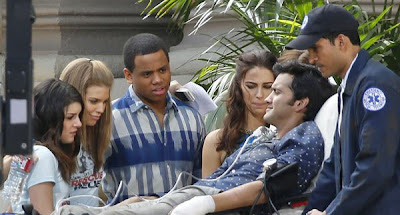 In comparison with the storm in GREY’S ANATOMY season nine finale, the 90210 series finale disaster episode was rather mild. The only lives at stake were Adrianna’s and Navid’s, and they eventually got out from under the collapsed stage without much of a challenge. What I didn’t understand was why the writers didn’t follow through with what caused the explosion. It was the inflammable or explosive substance that Campbell had planted in Liam’s bag, which Liam forgot at the auditorium when he left with Sydney. If they didn’t want to explore that further, I found it absolutely pointless to have Campbell’s character make an appearance in the penultimate episode. As far as everyone’s personal lives were concerned, the finale was a good way to wind up everyone’s stories, especially Adrianna and Navid getting back together once and for all, and Liam finally proposing to Annie. What didn’t make sense was Silver’s cancer at the end. However, with her confiding in Dixon, I guess it was probably a way of implying that those two would get back together while he’d help her fight the cancer. 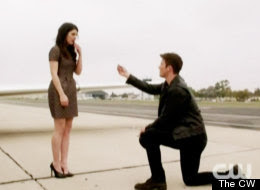 Silver really went around the group, didn’t she! She dated Dixon, Navid, Liam, and even Teddy before he came out of the closet. The only guys she didn’t hook up with were people like Raj, Austin and Max. Speaking of Max, I was really hoping to see Naomi get back with him at the end. I wonder why the writers screwed things up for Naomi and Max after bringing them back together. Their relationship died a pathetic death with the post-break-up sex and eventual divorce. The writers could have easily avoided all of that and given one of the most interesting couples of the show a proper end. Instead, they put Naomi with the very weak and uninteresting Jordan. The rest of the storylines leading up to the finale weren’t all that interesting either, from the drama with Naomi and Jordan’s family; to Navid being charged with cheating, despite his efforts to set Campbell and his friends up, and how the writers completely forgot about that in the end. At least Annie ended up with a career as a writer through her ’50 shades of grey’ storyline! All in all, the series finale felt like any regular episode, except for parts like Adrianna and Navid talking about growing old together, and Liam proposing to Annie in a grand, dramatic gesture. The writers really should have set up a stronger central story arc over the last five to seven episodes to make the end feel more final than it did, regardless of whether or not everything would be resolved.

What did you think of the 90210 series finale? Was it up to the mark in your opinion? Did the big proposal scene make it worth your while? Comments welcome!
on Monday, May 20, 2013