MONDAY MORNINGS – COULD BE JUST THE RIGHT PRESCRIPTION

MONDAY MORNINGS, TNT’s new medical drama from David E Kelley started out with a pilot that didn’t grab my attention as it should have, but two episodes in, I would say that the show does have some serious potential. Here’s why... 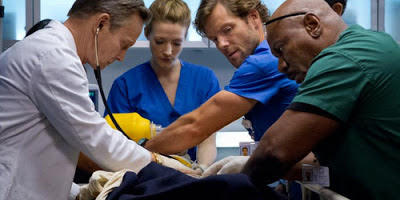 The Medical Drama
With the brilliant HOUSE MD off the air, and PRIVATE PRACTICE also having ended, I really wanted more medical drama on TV (besides GREY’S ANATOMY, one of my favourite shows), and MONDAY MORNINGS seemed to be my answer. While the premise wasn’t very exciting, the fact that it was from David E Kelley (who gave us DOOGIE HOWSER MD, and CHICAGO HOPE) made me look forward to it. And I wasn’t disappointed. While the pilot wasn’t outstanding, it served its purpose as a medical drama worth watching. As is the case in medical dramas, matters like convincing patients to go in for procedures and making quick decisions to perform surgeries are all a part of MONDAY MORNINGS’ fare. The medicine is engaging, as the doctors go about trying to solve the mysteries of their patients’ conditions. While they do have a trauma chief and cases like organ transplant, I feel that there has been too much focus on neurosurgery, in the first two episodes at least. This could obviously change, with cases in general or cardio-thoracic surgery also forming important procedural stories, but given the number of neurosurgeons, I’m waiting to see how. On the other hand, I would also like to see more emergency procedures and more action in the ER perhaps, to make it really gripping. Emergency procedures and surgeries would also make for good cases to dissect at the Morbidity and Mortality meetings (M-and-Ms). 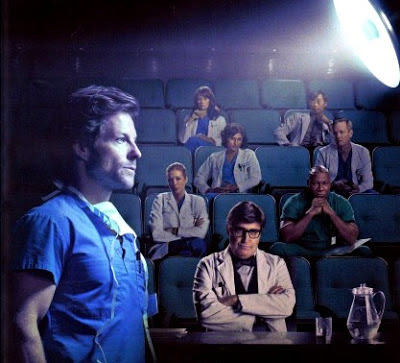 Morbidity And Mortality
It seems like the writers are being a quite indulgent while writing the Morbidity and Mortality scenes. The sarcasm and tone of the chief of staff, Dr Hooten makes for good drama and provokes the audience’s emotions in more than one way, however, it seems a little exaggerated and unprofessional to me. However, since the show is co-created by a doctor (Sanjay Gupta, and is based on his book, Monday Mornings), there probably is some authenticity in the practice of ripping apart surgeons while reprimanding them for some of their poor judgements while working on patients. Regardless of that, the M-and-M meetings make for a good tension-creating tool in the storytelling, raising the stakes for the doctors involved in the cases dissected. It also makes us think of grey areas and gives us a sense of how difficult the doctors’ jobs can be at times. I particularly liked the M-and-Ms in the second episode, with the issue of dealing with a transplant procedure being brought up. That’s when I found that Dr Hooten was being a little too harsh. However, seeing Dr Ridgeway defending a resident gave us a sense of how varied the issues discussed at the M-and-Ms can be. Therefore I see potential in the M-and-Ms as an engaging way to take the series forward. What I would like to see is Dr Hooten at work himself and then question some of his own decisions, while he goes about pointing out the flaws in the patient care that other provide. That would be a very good way to develop his character as well. 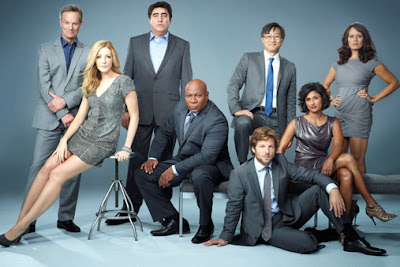 Character Stories
It was a little predictable to see the doctors ‘married to their jobs’, but it’s always good to see hardcore professionals in a profession-based drama. Dr Napur’s blunt way of talking and Dr Park being to-the-point aren’t groundbreaking traits in characters in a medical drama, but they are certainly effective. I like the character of Dr Villanueva. It’s always good to have this one genius who can baffle you with his diagnostic abilities (à la House). What I find a little hard to digest is how much Dr Wilson has gotten affected by the death of his patient in the first episode. I would say that the initial shock and disappointment was fine, but as a surgeon, he should be more capable of handling loss of this nature, and for him to even start hallucinating because of the loss was a little too much, I thought. Maybe that storyline is going somewhere, as he’s yet to meet the mother of his patient, but till then, we’ll have to wait and watch. As far as the characters’ personal lives are concerned, I think their stories are coming along at a decent pace, and as the series goes on, I believe what happens with them, personally, will become more consequential for us. 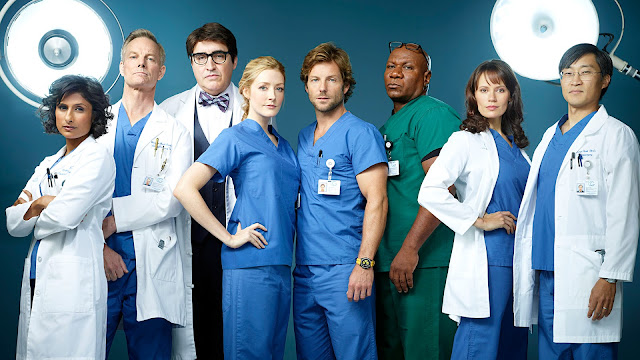 The Entire Package
While the pilot wasn’t as gripping as it could have been, it ended perfectly, and episode two set the tone for what all the show could do. Continuing storylines have been established, what with the lawsuit, and even with regard to the doctors’ personal lives. The cast is strong, with good actors like Alfred Molina, Ving Rhames and Jennifer Finnigan, so I’d be expecting some strong performances in the long run as well. The show deals with medical drama in the procedural genre well, while it still has some of the quirkiness that is typical of David E Kelley (ALLY McBEAL, BOSTON LEGAL). Dr Hooten’s piano in his office, the way he shaves his head in solidarity with his patient, and Dr Park’s blunt communication is all a part of that and adds to the entertainment quotient. In fact, a few lines of Dr Park, especially his “Not do; dead!”, are quite hilarious. And ultimately, MONDAY MORNINGS is a show with heart. With the characters, the hospital, the M-and-Ms, etc, there’s a lot of potential for it to be really good. I just hope it lives up to that potential and my expectations.

What have you thought of MONDAY MORNINGS so far? Is it the medical drama you were waiting for, or is it just another procedural according to you? Do share your views below.
on Friday, February 15, 2013