THE LADIES OF WISTERIA LANE TRACK THE #DHcountdown

Take a look at the last few days of the making of DESPERATE HOUSEWIVES, as presented to us on Twitter, by some of the leadingladies of the show


Earlier this week, the cast and crew of DESPERATEHOUSEWIVES wrapped things up on Colonial Street, Universal Studios (better known to us as Wisteria Lane), for good, as they finished filming the final scenes of the series. A few key cast members kept us fans updated on how things were progressing, via their posts on Twitter. Here’s a compilation of the photos they tweeted, to get an idea of what to expect as the show ends, or to simply take in stills from the last few days of the making of something that we’ve loved for eight years now. As Eva Longoria said in one of her tweets, “It’s the end of an era!”

THE COUNTDOWN BEGINS…
On Day 23, Felicity Huffman started the #DHcountdown hash-tag, posting this photo of her and Eva Longoria... 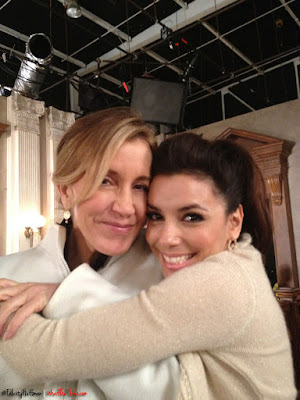 Day 12 saw Huffman and Longoria showing some love to Marcia Cross. It’s lovely to see that the on-screen friends have become really close off-screen as well. 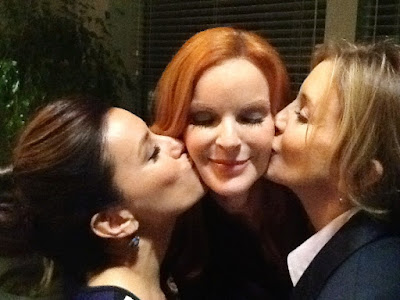 As the days progressed, it became quite apparent that it’s Huffman and Eva Longoria who seemed to have hung out together more than other cast members. Here, they’re protecting their hairdos from the rain outside. 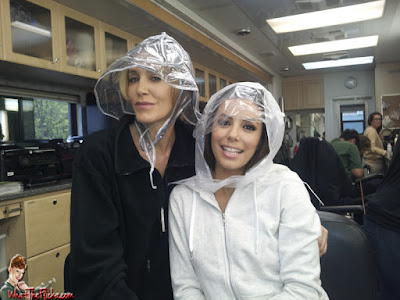 With just eight days of shooting left, Huffman posted this one of herself with Longoria and Marcia Cross… 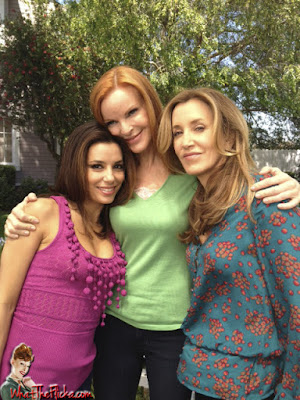 THE FINAL TABLE READ
The script reading had several of the cast members around the table, all in avatars that we haven’t seen on the show. Here are photos that Felicity Huffman posted on her blog, What The Flicka. (Click here, to see the post and all the photos, click here.) 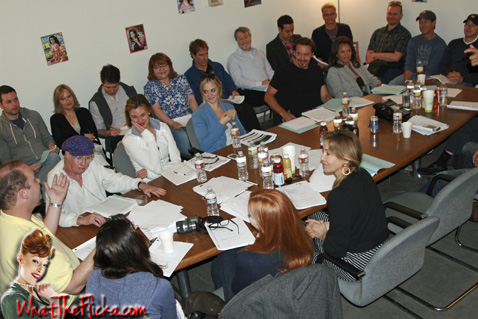 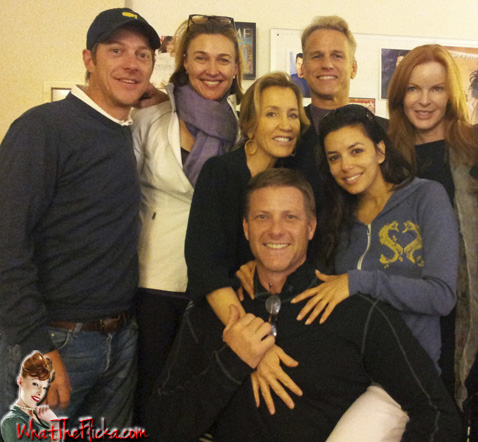 And Dana Delany—who is returning to the show, after her departure in the sixth season, to reprise her role as Katherine Mayfair, one last time—tweeted this photo of her fellow cast members, also at the final table read. 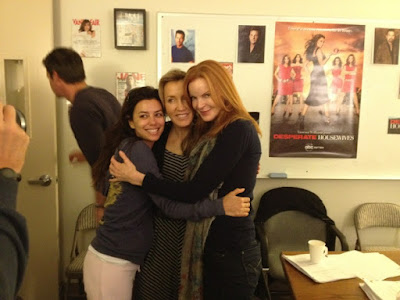 The show’s ‘voice’, Brenda Strong, who plays Mary-Alice Young, posted this photo of herself with a few of the other women present. 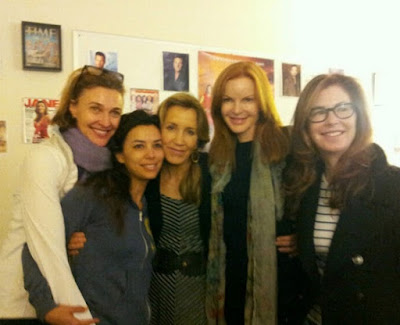 KATHERINE MAYFAIR RETURNS
Marcia Cross waited in anticipation for Dana Delany’s return to the show, as she tweeted this photo of the Mayfair house, mentioning Delany, asking her when she would set foot on Wisteria Lane. 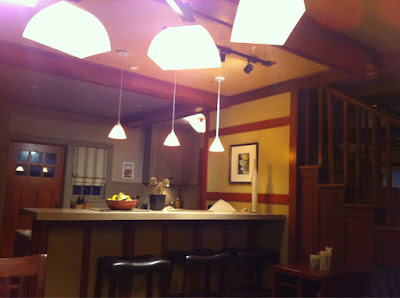 And then Delany arrived, tweeting this photo of the Mayfair mailbox. She posted this photo of her and the ladies, sitting on Gaby’s porch steps. I replied, saying that Katherine and Bree were wearingtheir signature red and green, respectively (an observation made, over the years). And she replied saying, “Good eye!” 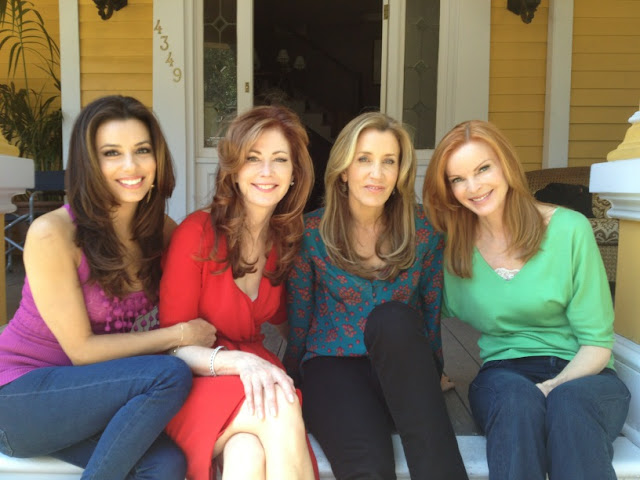 LAST DAY ON GABY’S PORCH
While on Gaby’s porch, Felicity Huffman tweeted this photo stating that it was the last time they would film there. 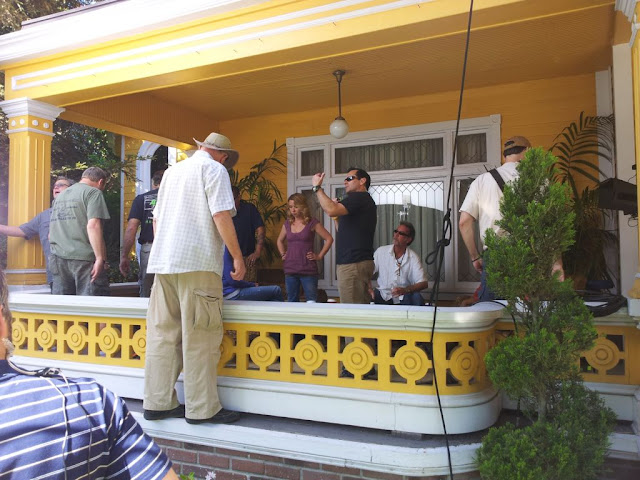 Eva Longoria, tweeted this photo of herself, saying, “This is me after a long day of DESPERATE HOUSEWIVES! Today was the last time I will shoot on Gaby's front porch! #SadnessSettingIn” 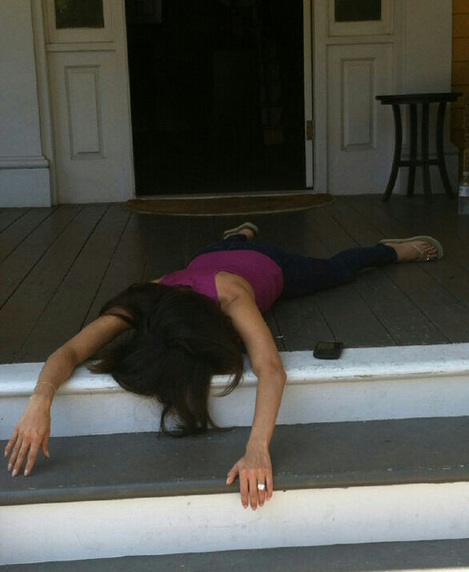 THE COUNTDOWN CLOSES IN
Felicity Huffman posted this photo of herself and her on-screen husband, Doug Savant, on Day 7, saying, “Who am I going to take naps with, quoting Doug, Day 7.”

And on Day 4, Eva Longoria posted this photo of hers, with Huffman, to mark their final day of shooting on Stage 17 in Universal Studios. 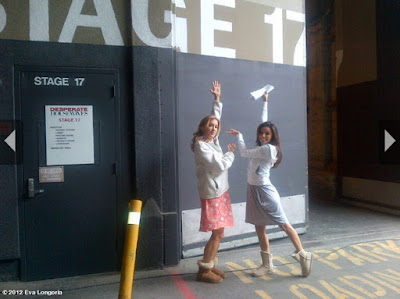 On the same day, Huffman tweeted this photo of herself with Savant and one of their on-screen kids. 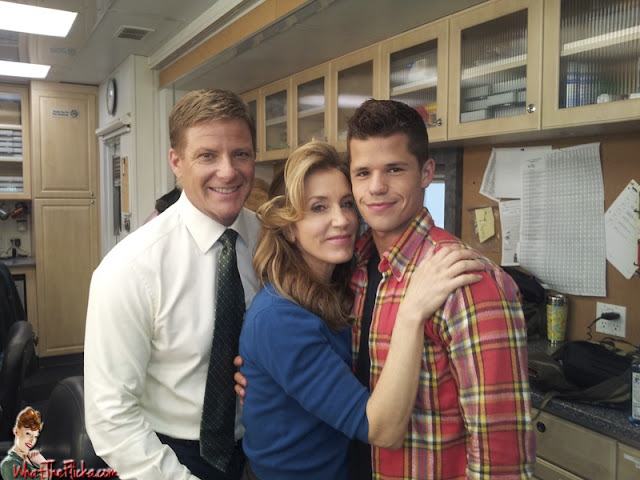 THE FINAL DAYS…
I mentioned, in an earlier post, that I had a feeling that the last scene of the show would show the ladies of Wisteria Lane playing poker, their weekly tradition for years. And on the final day of filming, FelicityHuffman posted this photo saying, “Set up for the last poker game with the women!” 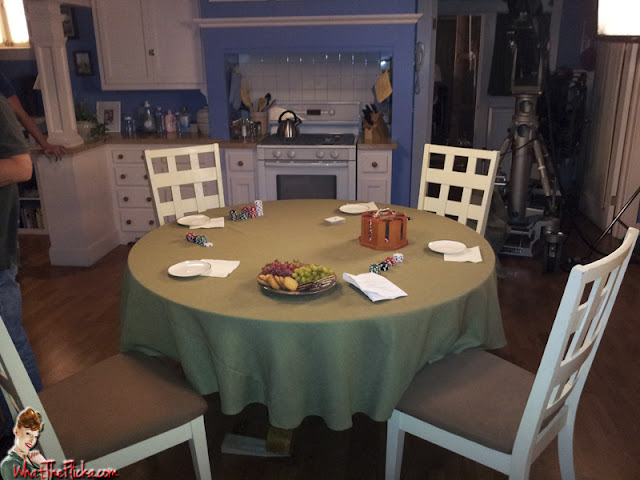 Eva Longoria went on to post these photos, which seem to have been taken after the scene was shot.
“Me and the greatest TV husband anyone could have Ricardo Chavira.” 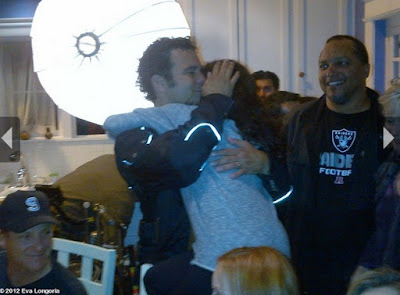 “Me and the beautiful Marcia Cross! Crying our eyes out!” 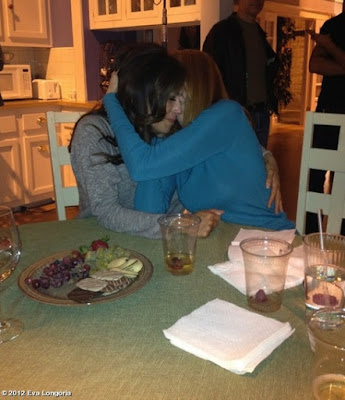 “Me and @FelicityHuffman holding each other so tight! She kept me standing for the last 8 years! I love u Flicka!” 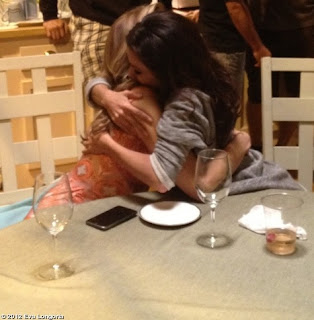 “The beautiful @vwofficial signing at our wrap lastnight! What an amazing woman to work with over the last 2 years!” 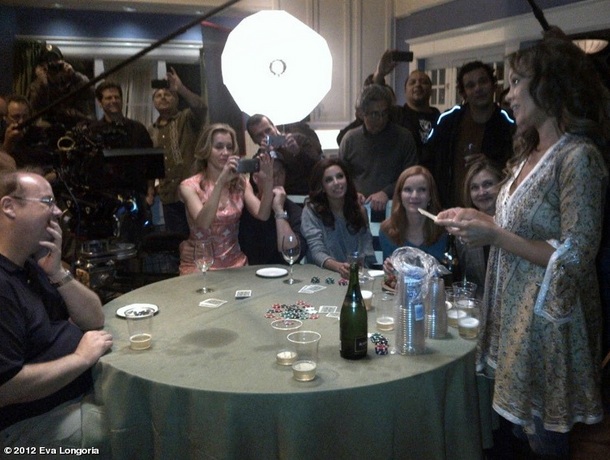 She was asked where Teri Hatcher was, and she said that Teri had finished filming a few days prior to that, which made me think that maybe Susan leaves the street at the end of the show. I’m just wondering!

THE END
Longoria packed up her things in her trailer and she said goodbye to her DH ‘office’ of eight years, by saying, “Bye bye trailer! All cleared out and empty! Ready for another actor to move in!” 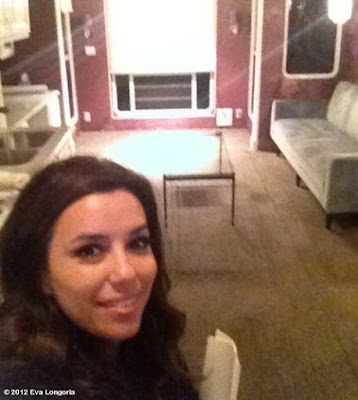 I’d earlier suspected that the show would end with a big event like a wedding. With Renée and Ben reuniting, it wasn’t too hard to guess that that big event would most probably be their wedding. And among Longoria’s last few photos was this, one. “That's a wrap! End of an era!” she said. 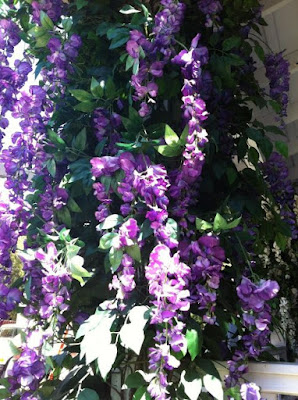 And just to wrap things up here, here’s a photo postedby Marcia Cross, who plays Bree, my favorite housewife. She said, “A little wisteria for you lovely tweeters. XO M,” referring to the wisteria flowers from the sets, after which Wisteria Lane was named.

What are your thoughts on the show ending? Do leave your comment below...


The DESPERATE HOUSEWIVES series finale will air on May 13, on ABC
on Saturday, April 28, 2012 4 comments

So I finally watched the pilot of SCANDAL, the new drama from Shonda Rhimes. The series premiere was gripping, with a promise of a lot more to come. Here are my thoughts on what went down… 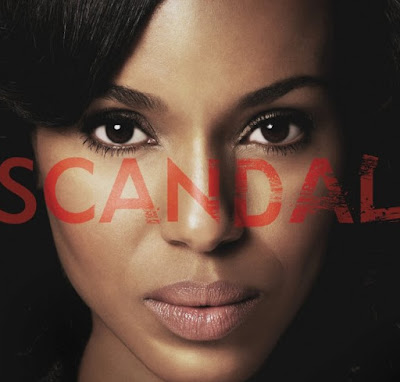 Olivia Pope… The opening scene of the series reveals just how big this name is. And then we go on to see how that is. Here is a woman who can walk into the Oval Office and greet the President just as confidently as she can pass orders to those who work under her. Here is a woman who can tell some of the most dangerous people in the country that the money she’s offering them is enough for an exchange and that it will be enough for them. Here is a woman who won’t take any nonsense from anyone. Yet, she is also a woman who will help her employee pick out an engagement ring to give to the woman he loves. She’s a woman who can convince a celebrated war veteran to come out of the closet, even though it goes against every view he’s publicly embraced. She is also a woman who puts up a strong front and ‘doesn’t believe in crying’, but can still have a weak, vulnerable moment about a love that she lost. Olivia Pope is just the kind of protagonist to be the backbone of a show that’s powerful, engrossing, and entertaining even. And still, she’s not all there is to SCANDAL. 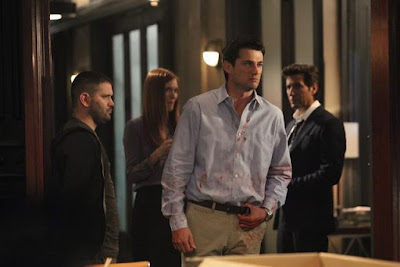 When I first heard that Shonda Rhimes (GREY'S ANATOMY, PRIVATE PRACTICE) was making a show based on crisis management firm, and the woman behind it, I was firstly thrilled that there was going to be more from Rhimes (especially after OFF THE MAP got canceled). I would’ve watched the show anyway, being a fan of all her work till date; however, the premise itself sounded enticing and exciting, and different from a lot of other subjects covered on television. And after months (maybe over a year even), the wait ended. SCANDAL was here, and as I read up on the show, watched the promos and interviews, and learned more about what and whom it was based on, my curiosity and excitement grew. Hopes and expectations ran high, and I was not disappointed. From the packaging to the opening; the editing to the music; the dialogues to the performances… everything gripped me. 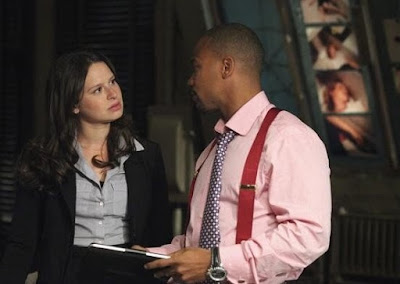 The show starts with a new employee who considers it a great honor to be working for Olivia Pope, yet struggles to understand Pope’s ruthless ways and how everyone just goes along with what she says. There’s a case that falls into their office—a celebrated war hero with political ambitions, who seeks their help in proving his innocence involving a murder. As always, the backdrop of the show involves the stories of each of the characters and the pilot manages to flesh it out well enough to let us know what they’re about, and still arouse our curiosity to know and watch more. Olivia Pope has baggage of her own, obviously (Rhimes’ leading ladies must be damaged in some way). But it’s good to see what the character has done with her baggage, and how she copes with it in a tough situation. Additionally, Kerry Washington does a fine job of playing Pope. (I’m sure she can be better, and I’m sure she will, once the more challenging parts arise.) And when the episode ends, the bomb that is dropped and the way it is delivered could even give you goose-bumps. 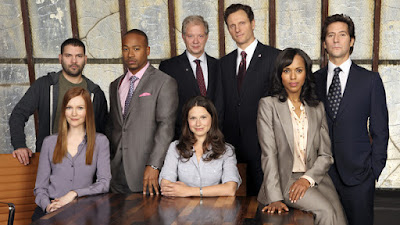 It’s a show that has a lot going for it: a fresh premise, a strong protagonist, an exciting pace, crisp storytelling, great visuals. Most of the other complementary must-haves—the background score, the editing, the transition shots, the sets, etc—add serious value to the entire experience. In parts, things did seem a little too far-fetched. And at times, it even seemed a little too convenient, with things just falling into place for Pope and her team, without too much of a struggle. However, if you can focus on what’s good (which is most of it), you could be in for an entertaining journey. I’ve already listed a number of reasons why this show deserves a solid chance. I may have only seen the pilot, but knowing what Rhimes is capable of, I foresee great things in SCANDAL's future.

What did you think of the SCANDAL pilot. Do share your views here...
on Wednesday, April 11, 2012 3 comments