NIGHT OF THE OSCARS

As mixed reviews of the 83rd annual Academy Awards flood the internet, here’s what TV TALK thought about the biggest night on television.

For a complete list of winners, go to Oscar.com

Firstly, the Oscars are definitely a class apart, standing out from any other award show in the world. While the level of excellence may vary from year to year, I definitely feel that the show can never disappoint. Even though last year’s hosts Steve Martin and Alec Baldwin were far from great, the show was still fun, and amazing to watch. This year might not go down as the best edition of the Awards in recent times, but it definitely had my attention throughout, even throwing me in peals of laughter every now and again. The presentation of lip-syncing dialogues as lyrics to songs thrown into films like Twilight Eclipse, Harry Potter & The Deathly Hallows Part 1 and The Social Network was definitely entertaining. 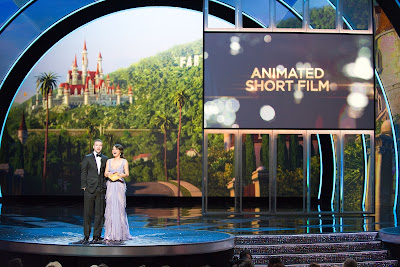 Moreover, during the Oscars, I always look forward to innovative presentations, which were very much a part of this year’s show as well. The way Justin Timberlake and Mila Kunis presented the Animated Feature and Animated Short awards (having the set light up into a visual from Shrek, the first film to win the Animated Feature award), was fascinating. 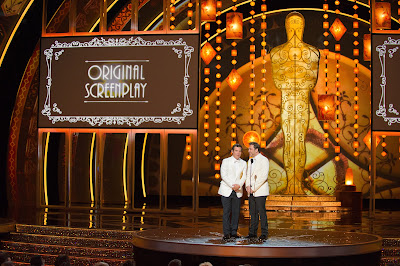 The way Anne Hathaway  remembered the first ever Oscars, followed by Josh Brolin and Javier Bardem, coming in, wearing old-school dinner jackets, to present the Oscars for Screenplay was amazing. And even the way the Original Score nominees were presented with the orchestra doing a medley of numbers from each of the films was terrifically done. Celine Dion’s performance while presenting the In Memoriam was also one of the highlights of the show. 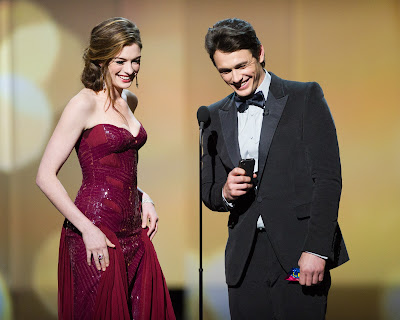 The show started with a hilarious sequence of the hosts being juxtaposed into scenes from the Best Pictures of 2010, with impressive guest appearances by Alec Baldwin and Morgan Freeman. One liners like host Anne Hathaway telling her co-host James Franco, "You look very appealing to a younger demographic as well,” were refreshing and funny. 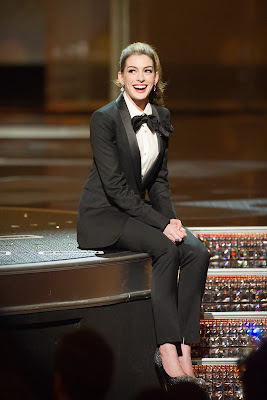 Besides Franco drawing perverted interpretations of the titles of films from the year gone by, there was no humor that was inappropriate and witless, which was a relief. Hathaway’s performance with references to her duet two years ago, with then host Hugh Jackman was really funny, even though I didn’t see the point in Franco turning up in drag at the end of it. Moments between the hosts like the time when Hathaway said, “I’m not modest; I’m just not nominated!” made for some laughs, and took forward their chemistry as was seen on the promos for the show. Franco seemed to have a lot less to say, as compared to Hathaway, which was fine by me, because she was the livelier host with a joie de vivre that was endearing and entertaining. I thought that Franco seemed a little subdued in comparison, which was disappointing, but Hathaway made up for that. Overall, I think their role on stage was a lot less meaty, as compared to what hosts of the Oscars usually have.  Despite that, for me, they did more than make up for the disappointing hosting of last year.


I have to say that, this year, the Oscars weren’t as impressive on the red carpet as compared to the Golden Globes. While there were a few stunning evening gowns being trailed into the Kodak theatre, I don’t think the outfits matched up to the glamour quotient and drama of the gowns worn by ladies like Catherine Zeta-Jones, Olivia Wilde and Eva Longoria at the Globes. It was interesting to see a mix of trends in terms of color, with red, blue, lavender and wine making a mark, even though more neutral tones like nude, grey and silver emerged as the most dominant trend. Further to that, I was most impressed with dresses worn by Halle Berry, Reese Witherspoon and Helen Mirren. While Berry nailed the embroidered and sequined nude gown she wore, Witherspoon stood out in one of the very few black dresses of the evening, which was reminiscent of Julia Roberts’ Valentino that she wore when she won the Oscar in 2001. Mirren's dressing is always age-appropriate, despite being able to show how fit she is at her age. Her grey dress did wonders for her. As it turns out, the above ladies are all Oscar alumni—a group that could definitely be called the most stylish of the evening. Among other Oscar winners from recent times, Sandra Bullock displayed oomph and class in red.

While Hilary Swank and Gwyneth Paltrow shimmered in silver, Penélope Cruz and Jennifer Hudson sizzled in fiery hues. Nicole Kidman and Cate Blanchett seemed to be the only exceptions in that group of past winners, with dresses that didn’t quite work with their silhouettes or patterns. Among this year’s nominees, Michelle Williams and Amy Adams got it right with their high necklines, as Jennifer Lawrence brought out the classic element of red with her simple gown. Winner Melissa Leo’s dress looked nice on stage and Natalie Portman’s wine-colored number looked rich and classy as she accepted her Best Actress statuette. Another impression in wine was Scarlett Johansson, who went with a look that was different from her classic red-carpet style, wonderfully pulling off a more contemporary gown and slightly disheveled hair. Other noteworthy appearances were those made by Mandy Moore and Hailee Steinfeld, both in nude-gold tones.

THE WINNERS
Hot favorite, The Social Network took away just three Oscars, one less than the highest number of wins in the evening—The King’s Speech and Inception, both with four each. Inception rightfully won for its stunning Visual Effects, Cinematography, Sound Editing and Sound Mixing. I think that offered some consolation to disappointed audiences, who would have liked Inception to be named Best Picture, and for Christopher Nolan to have been nominated for the Direction award. When Tom Hooper won Direction, it sealed the deal for The King’s Speech, over The Social Network for Best Picture. Many feel that the Academy’s voters were just going with a more traditional choice, in that category, but I beg to differ. I think that The King’s Speech was the more superior film and hence the Academy rewarded it accordingly.

The Social Network did get its due, with being rewarded for its Adapted Screenplay, Film Editing and Original Score, all of which it had excelled in. Toy Story 3 took away two Oscars for Best Animated Feature and Original Song. Alice in Wonderland got its deserving wins in the Art Direction and Costume Design categories.

Another film with two nods, The Fighter won Christian Bale and Melissa Leo Oscars. There were no surprises there, with both actors having delivered stellar performances in the film. Bale’s acceptance speech was touching, and Leo’s overwhelmed slip of tongue was funny, to say the least. Moving on to the Leading Role categories, I don’t think there was any doubt that Colin Firth (The King’s Speech) and Natalie Portman (Black Swan) would win this year. While I found Portman’s speech earnest and heartwarming, as she beamed with joy, I thought Firth could have made more of an impression while accepting. 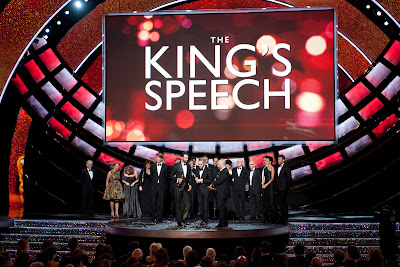 After The King’s Speech joined the list of 82 Best Pictures, making Oscar history, the show ended in an offbeat way, with a choir of children performing, which didn’t have quite the impact, until all the winners from this year emerged from behind, taking a final bow. Like the ending of an opera or a theatric musical, I think it made a lot more sense than to have the hosts just saying good night after the Best Picture presentation. And with that, I’d conclude that as always, the Oscars did not disappoint in any way, proving itself, yet again, as being the best night on television and a class apart as compared to any other award show.

What did you think of the 83rd annual Academy Awards, the red carpet, the hosts, the show and the results? Share your views here.
on Monday, February 28, 2011