‘FALL PREMIERES’ IN INDIA, Part I

So September came, and while I’m yet to watch all the big season premieres, I have been following older seasons of two shows; seasons that have only just made it to Indian television. September saw the premiere of Brothers & Sisters and Ugly Betty (both, S4, which is the final season for the latter). 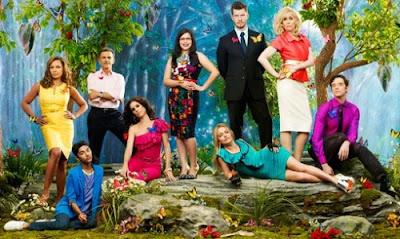 Ugly no More
Let me start by saying that Ugly Betty has never been among the shows that I really look forward to watch; it’s just something that’s fun in parts and is worth watching when it airs. Right from S1, I didn't find it all that exciting, and with each season ending, I found that there wasn’t much more that they could do with the show. And just as well, the show has ended. Its final season makes me understand why, even better. I mean, what started as a story about an unpopular misfit in a work place, became just the opposite of that.


In the fourth season, Betty has achieved what her contemporaries who mocked her couldn’t. She may not be very less ugly than she was in the beginning, but she does have quite a fan following. For an ugly misfit, she certainly has had a bevy of good looking, nice, and even successful guys falling for her (Henry, Gio and Matt!). And, to top that, she’s best friends with the most important person in the office—co-owner of the company and editor-in-chief of Mode magazine, Daniel Meade! She’s the go-to person for everyone around, including the woman who runs the company, Claire Meade. So what’s special about her story now? She’s yet to turn into a swan, maybe, but her life seems near perfect! (I think her final transformation into a swan will happen when her braces come off, if they do at all. It’s ridiculous that she’s had them on for almost four years. You don’t need to be an orthodontist to know that no one has braces on for so long!) 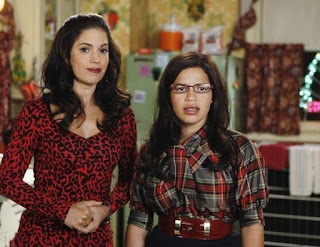 Now don’t get me wrong... I’m all for evolution of a show and its characters, but when the entire premise of the show has changed, I won’t really call it evolution; I’ll say that the show has gone off-track. Besides that, the content, in general, is gimmicky and a little too eccentric at times, and I find Betty rather annoying. Among the positives, there have been a few episodes that I really liked, for example, I loved the episode in the Bahamas and the one when Betty and Hilda both think they’re pregnant. Also, this season, I’m really enjoying the bonding between characters I never really saw as being friends, namely Marc and Betty, Marc and Daniel, Marc and Justin, and Amanda and Claire. Yes, Marc features a lot on that list. He's real fun to watch, especially when he's with Amanda. They're my favourite characters; always fun to watch! And, of course, Wilhelmina Slater is always awesome. Vanessa Williams brings an incredible energy to her role as Slater this season as well, and she is one of the things about the show that I'll really miss. (However, her being a part of Desperate Housewives S7 does offer some consolation.)

All said and done, I’m not very sure, but maybe the idea of the show was to show how Betty goes from being a misfit to the centre of attention, achieving big things. Even so, I do think the show had run its course, and it was time to end. More on this, once I’ve seen the finale.