Earlier this week, we bid a ‘modern farewell’ to the Pritchetts, Dunphys, Tucker-Pritchetts and Delgado-Pritchetts. The end of MODERN FAMILY was a bittersweet end, even as it left me wondering why they couldn’t just go on! Here’s a look at ‘Leave the porch light on’, who moved out and how they all moved on

The thing about the MODERN FAMILY farewell that made it perfect was that in a lot of ways, it was just like any other episode of the show. Yes, a lot was changing for everyone, but the episode was still very true to what it’s always been, with the regular banter between characters, situational goof-ups, out-of-context misunderstandings, and the characters just being themselves, unapologetically, as they always have been. But in a lot of ways, it bookended the series, and gave us a picture of the last 11 years. Here are the major highlights of the farewell.

1. A FAREWELL TO THE RELATIONSHIPS
In their own way, all the relationships that made the show what it was for 11 years got their moments to shine. Of course there were the three main couples. Claire and Phil were frustrated by the chaos in their house, and then reminisced about it all less than an hour later. Jay and Gloria reflected on their relationship and defined their role-reversal, with Gloria being the full-time career person now. Cam and Mitch explored what was important to them as they prepared for the next chapter of their lives, while welcoming a new member to their family. However, it was good to see that even the sibling bonds that have formed such an integral part of the show being given their moments—the Dunphy kids pranking each other and getting emotional about going their separate ways, Joe pranking Manny, and of course, the most important sibling bond—Claire and Mitch—was done complete justice to. There were nods to even the other important relationships, such as Cam and Gloria (even though Gloria trivialized it a bit), Manny and Luke, and of course, Jay and Phil adding to the awkward moments that have been pure gold since Jay flew that model plane into Phil’s face back in season one. It was all quite well done, squeezing as much as they could into the two-part finale.

2. THE FAREWELL BUILD-UP
Speaking about Jay’s model plane ‘accident’, we saw them revisiting that incident earlier in the final season with Dylan joining Jay and Phil. Phil, still craving approval and affection from his father-in-law was upset with Dylan getting special treatment, only to eventually understand why Jay was so mean to him back in the day. It was all really a part of the entire season building up to the finale—a season-long farewell in the making. Through the final season, they’ve even had episode titles such as ‘The last Thanksgiving’ and ‘The last Halloween’. The latter was also a subtle bookend, with Gloria feeling conscious about her age when someone correctly assumed she was Jay’s wife, which was a reference to the series premiere in which someone mistook her to be Jay’s daughter. Other big changes were building up as well—Claire quitting her job at Pritchett’s Closets, Jay saying goodbye to a retiring Margaret, Cam exploring the big job opportunity in Missouri, etc. In fact, in ‘The last Christmas’, in which they all get together for Christmas dinner at Mitch and Cam’s, was almost like a finale in itself, as was the final family vacation in Paris, which ended with an emotional moment in a restaurant that overlooked the Eiffel Tower. The entire season was a big finale event, and it was just the nicest way to do it, all the while never changing what the show was always about.

3. THE GROWING MODERN FAMILY TREE
It was sweet that the ever-growing family got their final member before we stopped following their lives, in the form of Rexford Tucker-Pritchett. And it didn’t feel gratuitous, because several seasons ago, Mitch and Cam had contemplated adding to their family. It wasn’t something that came out of the blue only in the last couple of episodes. So Rex joining the other new entrants to the family—Poppy, George, even Dylan, and Joe—who weren’t a part of the tree in the beginning, was a nice little nod to the evolution of this modern family.

4. THE MODERN FAMILY THAT MOVES ON
Of course, while staying true to the essence of the show, there had to be some major changes that would close the chapter of this family’s lives that we’ve witnessed. It started with Mitch and Cam deciding to move to Missouri, then Alex finding out about moving to Switzerland, Luke declaring that he'd be moving out for college, Manny's plans to travel the world, and finally Haley and Dylan deciding to get their own place with the twins. It was all just bittersweet and perfect, showing everyone’s evolution. A lovely touch was having Haley and her family move into her uncles Mitch and Cam’s old house, keeping all three scene-starter houses in the family.

5. THE FAREWELL FRAMES
The final moments of a series are always so important. It’s almost like a show that’s over is only considered to be as good as its finale. And the last few shots and frames are those that can leave a lasting impression for years—quite like the last shot of the iconic gold frame on Monica’s purple front door in FRIENDS. What MODERN FAMILY chose to do was probably as good as that, closing the episode with the exterior shots of lights going off in the three houses that started most episodes over the last 11 years. The final epilogue then showed us family photos in each of those houses, the last frame being the big season one family photo of them all dressed in white. It was all very nostalgic, emotional and symbolic.

Of course when the Dunphys kept that porch light on for their kids who might return home, I couldn’t hold back those tears. It’s the end of an era. One of the best series ever—a modern classic—has come to an end. This is a family that will be sorely missed.

The 2020 Emmy nominations were announced yesterday, with a lot of buzz surrounding the record number of minority nominees and so on. While t... 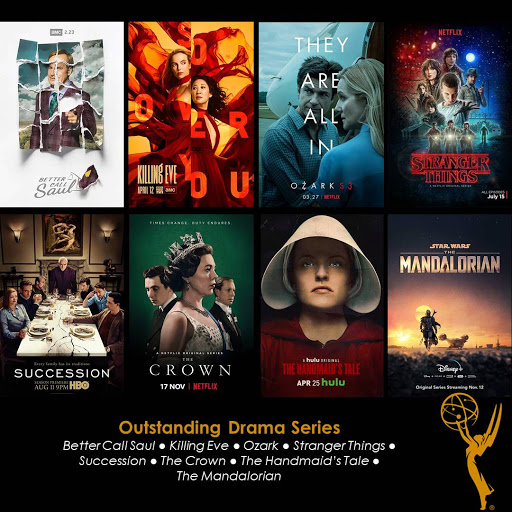